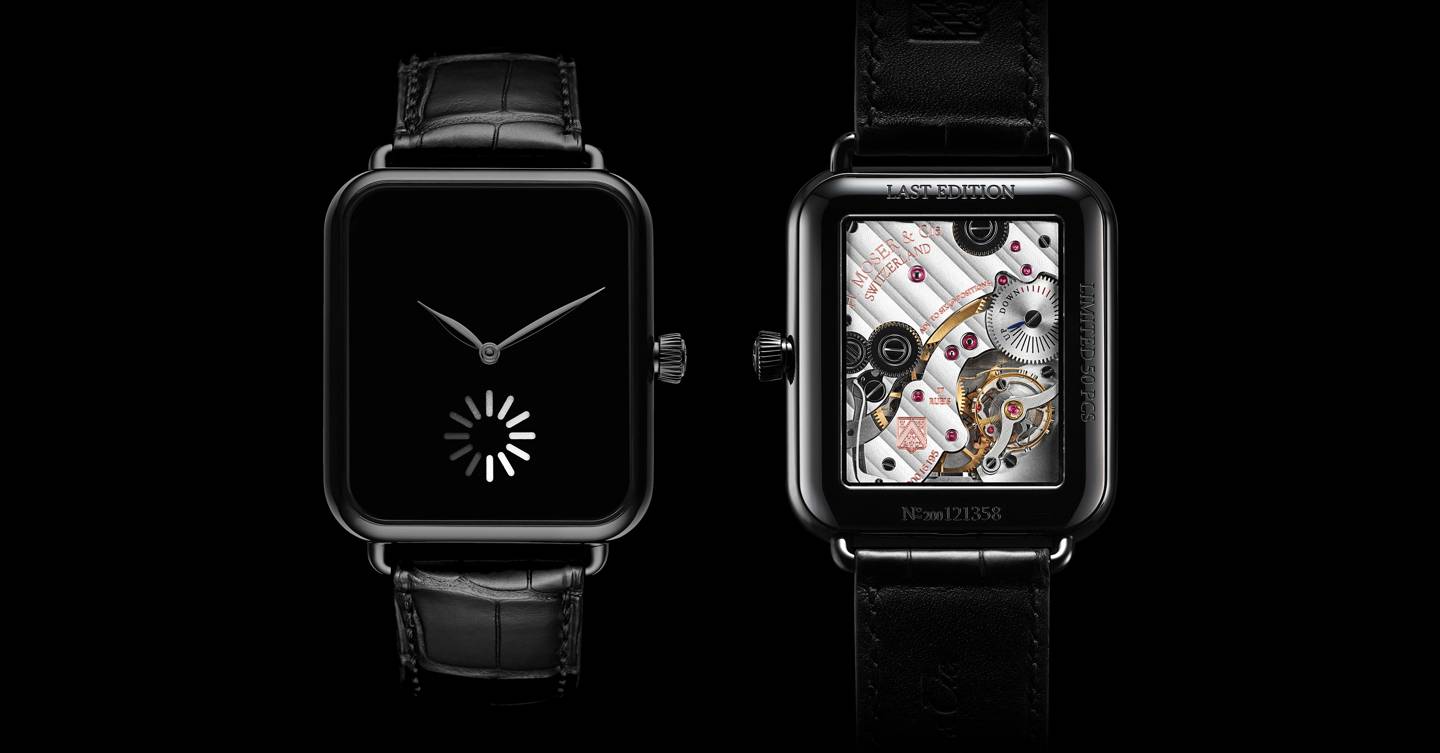 Two years ago, a watch brand little known outside the world of high horology revealed something that looked uncannily like an Apple Watch. Except it wasn’t. It was the antithesis of the Apple Watch. It had no dial, hands or any other visual means by which to tell the time. And it cost £274,852.

Two years later, H Moser & Cie has returned with a substantially more affordable version of this traditional mechanical watch in smart clothing. By affordable, the Swiss Alp Watch Final Upgrade – a limited edition of just 50 pieces – costs a mere $30,800 (£22,563), that’s more than ten times less that the last version, but considerably more than any flavour you fancy of the current Apple Watch 6.

Sporting the familiar rectangular shape of Apple’s smartwatch in steel with black DLC coating, the Swiss Alp Watch Final Upgrade now has a pair of hands to let you tell the time. The previous Swiss Alp Watch Concept Black had an entirely blank face and relied purely on sound, or more precisely chimes, to communicate the hours and minutes of the day.

H Moser says the Swiss Alp Watch Final Upgrade “pays tribute to the codes of connected watches in its design”, and here the brand is referring to not just the shape of the watch but also to an offset small second dial at 6 o’clock, redesigned as a shaded disc made up of openings.

The company says this is meant to evoke “the constant passing of time”, but it is clearly a closely rendered version of a spinning download wheel, albeit in mechanical form. It is fun, and convincing, but it also has the unnerving effect of making you think the watch isn’t quite ready to wear, somehow.

The Swiss Alp Watch Final Upgrade is entirely mechanical, in fact, with its hand-wound HMC 324 movement providing a minimum power reserve of 100 hours – more than the 87 hours of the last iteration. The internals of the watch can be seen on the rear of the Final Upgrade through a see-through sapphire crystal case back.

One last nod to innovation – for this is apparently the final smartwatch impersonator piece from H Moser, hence the name – is the employment of Vantablack, a material developed by Surrey NanoSystems that is one of the darkest substances known, absorbing up to 99.965 per cent of visible light. Here it is used on the dial to combine with the blackened hour and minute hands to give that illusion of a powered-down Apple Watch.

As with the previous model, for those interested in accurate timekeeping – and with £22,563 to spend – the mechanical nature of the Swiss Alp Watch Final Upgrade will never tell the time as precisely as the Apple smartwatch at which it is poking fun.

But for H Moser this is not the point. “No phone. No Messaging. One application: Time” is the mantra for this last anti-Apple Watch. You can appreciate the joke but considering that the Apple Watch now outsells not only H Moser, or Patek or even Rolex, but the entire Swiss watch industry, you might wonder who is having the last laugh.

☀️ Coronavirus experts explain what summer 2021 will be like

🎧 Looking for new headphones? Here’s how to buy the best, whatever your budget

🐶 Fraudsters and thieves are cashing in on the pandemic puppy boom