The Inventor Who Upgraded Japan’s Mysterious Robots 250 Years Ago 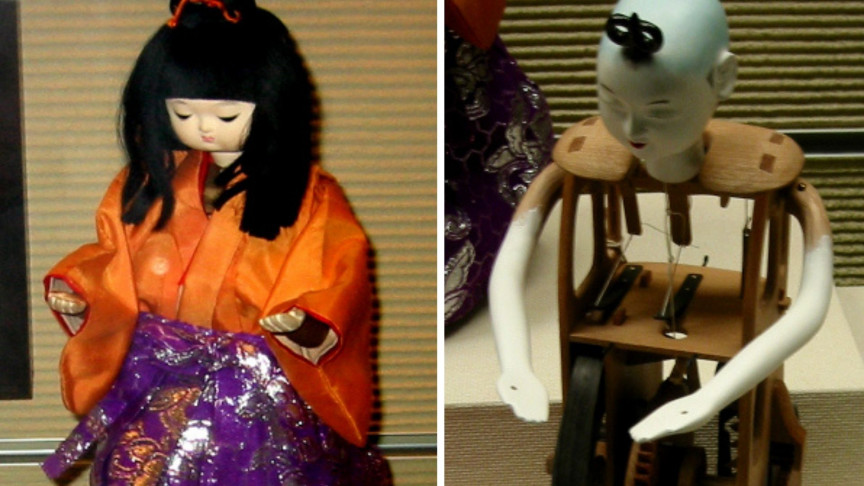 Tanaka Hisashige was the co-founder of the Japanese tech giant that is now known as Toshiba Corporation. In Japan, he has the same reputation that famous inventor Thomas Edison has in the U.S. He created the pneumatic fire pump, steam warships, the myriad year clock, and many other interesting technologies, but his most fascinating inventions are the uncanny mechanical dolls that he created around 200-years ago that have transformed the traditional Karakuri puppets.

In Japan, Karakuri ningyō or Karakuri puppets are mechanical dolls that have been around since the 17th century. Historians consider these elementary-level robot dolls an important part of Japan’s cultural history, as well as the inspiration behind Japan’s love for robots.

The history behind Karakuri ningyō

Tanaka Hisashige may have built the most advanced Karakuri puppets but he was not the world’s first Karakuri artisan, in fact, the history of mechanical innovations like Karakuri ningyō dates back to the seventh century CE. Nihon Shoki, the second-oldest book of classical Japanese history, mentions an automated structure called the south-pointing chariot (an archaic wheeled vehicle guided by a doll-like movable pointer) which is based on a mechanism similar to Hisashige’s robot dolls.

Later, the introduction of mechanical European clocks in Japan is believed to have pushed the development of mechanical Karakuri dolls. By the early 17th century, many artisans began to use clock components for building Karakuri puppets. Butai Karakuri, designed for theatrical shows were a type of Karakuri construction first developed by clockmaker Takeda Omi.

Takeda opened Japan’s first puppet theater (Takeda-Za) in the Dōtonbori district in May 1662. The same year, he conducted the first Karakuri show. By the 1740s, more Takeda theaters were opened in other parts of Japan, and in 1741, there came a time when due to a rush of crowds, the management at Takeda Theater in Tokyo had to keep the theater closed for three days.

Earlier, Karakuri art was accessible to only the members of privileged and powerful sections of the Japanese society (such as feudal lords called daimyo) but during the Tokugawa, or Edo, period (the period from the start of the Tokugawa shogunate in 1603 to the Meiji Restoration in 1868) Karakuri construction and presentations became highly popular in public displays. The mechanical puppets were then being used by artists to entertain people not only in Takeda-style puppet theatres but during many festivals, carnivals, and streets performances.

Around the 1820s, Tanaka created mechanical Karakuri dolls which were able to perform complex body movements and actions. His robot dolls were even able to show expressions and gestures with eye, hand, and facial movements that could not be achieved by their predecessors.

Tanaka’s most famous Karakuri puppets were the arrow-shooting boy Yumi-hiki-doji and the letter-writing Moji-kaki doll. Because of their exceptional mechanical abilities, these are also referred to as Karakuri masterpieces. Tanaka’s arrow shooting doll was able to perform a step-by-step archery exercise and was also mechanically programmed to occasionally miss shots and show different facial expressions.

Whereas the letter-writing doll could create beautiful calligraphic letters on paper. This is really surprising because, in order to copy beautiful handwriting today, modern-day robots use advanced machine learning-related practices.

Higashino Susumu, a Karakuri expert at the Japan Karakuri-Automaton Society, has described the relationship between modern-day robots and Karakuri, saying that, “Japan’s robot technology is now top class. Actually, its roots go all the way back to inventors and craftsmen in the Edo period. I hope people all over the world will be interested in learning lots more about this ancient technology.”

The robotic dolls created by Tanaka were more closely related to modern-day robots than any previous Karakuri puppets because they were 100% mechanical in nature. They were powered by a built-in system composed of strings, pulleys, levers, cams, wheels, pneumatics, and hydraulics.

Tanaka was hailed as the genius of mechanical wonders. The oldest son of a tortoise-shell craftsworker, he began creating his automated dolls at the age of just 20, and by the time he was 21 he was delivering captivating Karakuri performances all around Japan.

Interesting facts about Tanaka Hisashige and his Karakuri robot dolls

The Karakuri construction methods reveal some important details related to the culture and history of Japan. Some of the lesser-known facts about Karakuri robot dolls and Tanaka Hisashige are given below:

The robot dolls from Tanaka Hisashige may seem like primitive robots, but some historians have linked them to Japan’s current robot culture, suggesting that Japan’s facility with robotic technology and love of robots may have evolved from the various Karakuri construction of the past. Although the dolls fell out of fashion around the time of the Meiji Restoration (1868), recent years have seen a revival of interest in Karakuri dolls. Stories about the dolls may have helped to spark interest in robotics among a new generation.