The Interesting Engineering Behind Air Force One 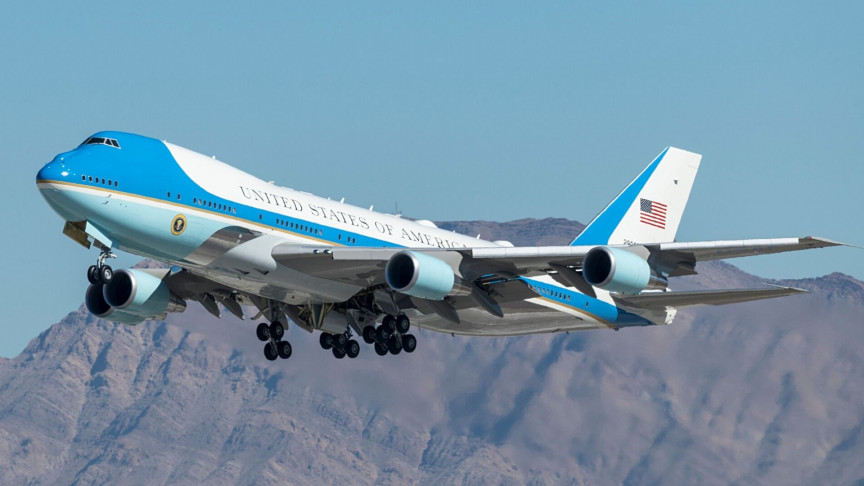 Air Force One might be one of the most advanced, and capable, aircraft in the world today. Specially designed, and heavily modified, this aircraft has one sole purpose — to get the President of the United States from point A to point B alive.

Technically speaking, any Air Force aircraft the president boards become Air Force One, though this convention has been relaxed in recent years.

There have been many Air Force One aircraft in the past, but here we will focus on the current. and probably the most famous — the modified Boeing 747-200B.

Prepare to be amazed, there is more than meets the eye with this incredible aircraft.

What is the Air Force One?

The President of the United States of America, like all other world leaders, needs to be ferried around the world at a moment’s notice. But, getting the president of, arguably, the most powerful nation on the planet around the world is no easy task.

The aircraft on which the president rides must get them from one destination to another safely and expediently. While serving presidents do have access to a variety of modes of transport for this, the most commonly used is Air Force One.

As previously mentioned, and contrary to popular belief, Air Force One is not a single aircraft but can be any aircraft that is currently carrying the president at any one time. However, that being said, it is now common practice to use the term in reference to specific aircraft equipped to transport POTUS.

Today, the term is usually used to refer to one of two highly customized Boeing 747-200B series aircraft, which carry the tail codes 28000 and 29000. The Air Force designation for the aircraft is VC-25A.

The aircraft must act as a mobile oval office, allowing the president to conduct business when away from Washington – whatever that may entail. The president must at all times be available in case a major situation arises and immediate action is necessary to protect the nation, and of course, the president themself.

Keeping the president safe while in a giant flying metal tube traveling at close to the speed of sound is a tricky task. Danger could loom around every corner and every cloud. To prevent disaster, Air Force One makes use of some astounding technology to ensure the president arrives safe and alive. Here are the most impressive features aboard the president’s flying fortress.

The plane is a massive two-deck 230-foot (70-meter) long flying fortress with over 4,000 square feet (1,220 m2) of usable space. In commercial use, the plane seats over 400, for the president, however, only 71 can make the lucky ride. Although, those are hardly intriguing figures, considering the other magnificent features of perhaps the most advanced plane on the planet.

Should things ever turn south on the ground, Air Force One must retain the ability to stay in the air for a very, very long time. On one tank, the presidential flying fortress can fly about a quarter of the way around the world. While sufficient enough for any other typical aviation traveler, for the President of the United States, it is potentially far from enough.

For this reason, one of the most important features of Air Force One is a special addition that allows aerial refueling. The attachment enables the plane to stay in the air almost indefinitely until the plane can land (permitting it does not break down). Using a modified refueler, a gas line extends from the back where an Air Force One pilot carefully guides the plane into position.

A refueling attachment at the front of the plane opens and allows fuel to flow into the aircraft.  With less than a meter of room for error, the maneuver must be incredibly precise. Refueling is incredibly dangerous and expensive. If at all possible, mid-air refueling is completely avoided.

Air Force also has some nuclear protection too

While all-out nuclear war is highly unlikely, it is, sadly, not impossible. For this reason, Air Force One has been designed to have some limited protection from nuclear fallout.

Almost every mechanical component relies on electricity. If an EMP was to penetrate the thin aluminum skin, the plane could quite literally fall out of the sky.

Air Force One, also has some shielding against EMF pulses. Electronic devices on the plane are “hardened” to protect against an electromagnetic pulse be it from the Sun, or a nuclear attack.

Its advanced secure communication equipment enables the aircraft to function as the president’s mobile command center no matter the circumstance.

What are Air Force One’s defenses?

How safe is the air force one? In short, very.

Not surprisingly, Air Force One is decked out with the most advanced defense mechanisms on the planet. Typical of military aircraft are flare systems and jammers to hide the aircraft and confuse missiles. What is a little more interesting is the plane’s ability to destroy incoming missiles in mid-air.

The plane is known to be fitted with active electronic countermeasures that are able to jam enemy radar frequencies as well as IRCM (Infrared Counter Measure) systems needed to divert heat-seeking Infra-Red missiles by disturbing their guidance systems.

The plane is also equipped with chaff and flares dispensers. Chaff dispensers are used to divert radar-guided missiles, while the flares are high-temperature heat sources ejected from the aircraft to mislead the missile’s heat-seeking targeting system.

An AN/AAR-54(V) missile launch warning receiver is located at the tail to report and track missile threats by zeroing in on their ultraviolet exhaust signature. The receiver is also used on special-operations warplanes.

However, most details about AF1 and its defense systems remain classified, so there might be other systems providing anti-missile protection for the world’s most important aircraft that we are unaware of.

Air Force one has a special onboard operating room too

Keeping the president alive means catering to all potential threats. Should the president ever fall ill or become injured, there is a medical suit that can operate as an operating room onboard.

Along with it comes to a highly skilled surgeon and a plethora of medications and equipment, should the worst ever happen.

Other interesting features of Air Force One

With the capacity to seat around 71 passengers and with some potentially long flights, Air Force One features a gourmet kitchen to feed all of its guests. The kitchen and crew are fully equipped to feed as many as 100 people at once. The storage also holds more than 2000 meals in case disaster strikes.

Some other notable features include around 85 telephones on board to keep the crew and president connected at all times. With it are general use phones, as well as ones with secure lines to hold secret conversations.

The plane can also go fast. Incredibly fast. With a top speed of about Mach 0.85, the plane can get anywhere very fast.

When Air Force One comes into land, it has utmost priority. Upon approach, the local airways are practically shut down to give priority to Air Force One.

However, in the unlikely event the plane breaks down, there is almost certainly its identical twin nearby. For redundancy, the Air Force maintains two identical 747’s in case one ever breaks down.

While it does suffer from outrageous running costs, Air Force One is an engineering marvel. Though many of its features remain classified, the facts that are known are nothing short of amazing.

It has also been announced that the current fleet of VC-25As will be replaced in the coming years. Under the Presidential Aircraft Replacement Program, the current aging aircraft will be retired and replaced with newer, and of course modified, Boeing 747-8s.

Tentatively designated VC-25Bs, most of the details of the program are, for obvious reasons, top secret. However, the new Air Force One aircraft are currently set to enter service in around 2024.

It is an incredible aircraft with an important mission — to get the President to where they are going safely and on time, every time.