The Future of Flight: Hydrogen vs Electric Planes 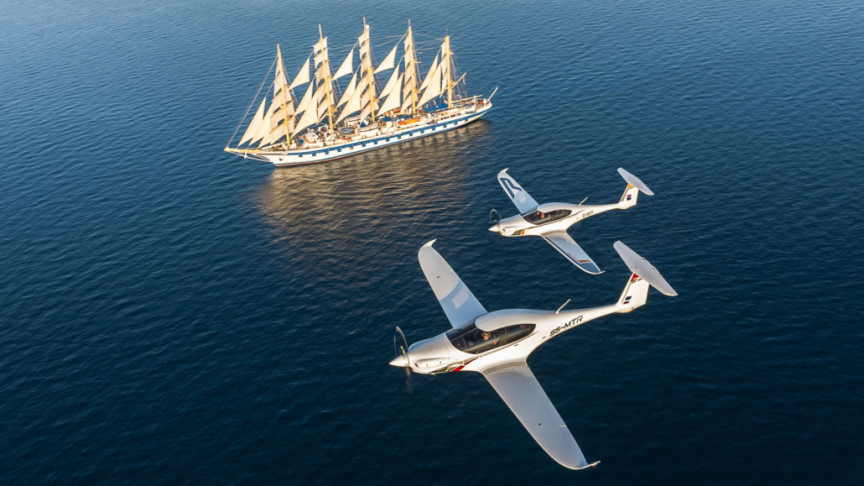 Humans harnessed the power of flight more than a century ago, allowing us to connect with each other across greater distances faster than ever before. However, this increased connectivity comes at a cost. Modern flight is completely reliant on fossil fuels, which are terrible for our planet. Aside from extreme solutions such as banning air travel altogether, we do have options for cleaner air travel. For one, we could power our flight with hydrogen or electricity.

From the very beginning, powered flight has used fossil fuels to achieve the desired thrust. Even the 1903 Wright engine was a gas engine. This is because fossil fuels are relatively easy to harvest and are packed full of usable energy. This energy, called “specific energy,” is a measurement of how much energy is in each unit mass of fuel and is one of the chief reasons fossil fuels have powered our flying machines. What would it take for electric battery-powered planes or hydrogen fuel cells to supersede fossil fuels?

How dense is your fuel?

There is a lot of math and engineering that goes into getting a vehicle to soar through the sky. Aircraft need to be light enough to fly, but heavy-duty enough to safely perform the functions we require – like transporting people or goods. Before you can design a fuel system, you need to know how heavy the vehicle will be, how far you plan to go, and how fast you want to get there.

After you know those values, you start adding fuel: jet fuel, batteries, or hydrogen. Each of those systems requires different mechanical components, which have different weights – not to mention the mass of fuel itself. Then, the more fuel you add, the heavier the vehicle is, meaning you need even more fuel. The trick is to find a balancing point.

Hydrogen fuel cells and lithium-ion batteries have a similar problem. The fuel system becomes impractically heavy and large when you scale the systems up to power the larger 200+ passenger planes traveling more than 1000 mi (1600 km). With both systems, technological advancements will make them more efficient as we continue to develop the technology. We’ll probably also need to rethink the way we use air travel in our daily lives as we redesign the fuel we use to fly.

Achievements in the field of electric airplanes have been grabbing more headlines in recent years. For example, Solar Impulse II successfully circled the Earth, becoming the first electric plane to do so. Because electric flight is getting more attainable, dozens of companies are developing electric small and medium-sized aircraft with plans to test them between now and the end of the decade.

MIT engineers developed an electric hybrid engine that could help reduce nitrogen oxide emissions from air travel by 95 percent, technology that could be very important as we decarbonize our aviation. Currently, most of the electric planes on the market today are small, one to four-seaters that can fly from 15 minutes up to around two hours and have a range of at most 300 mi (483 km).

Lithium-ion-powered planes are theoretically very well suited for regional flights carrying 30-200 passengers and traveling within around 310 mi (500 km). Assuming we’re able to develop sufficiently light battery systems, some experts think this is the upper limit for what lithium-ion batteries can do. Though lithium-ion batteries are a stable 30-year-old technology, there are some concerns when ramping this technology up in the age of electronics. They are prone to overheat, which can lead to dangerous fires, and mining the required rare metals has a heavy financial and environmental impact. A new type of battery might be the best step forward, and some experts have their eyes on lithium-sulfur batteries.

“Batteries that extend performance beyond the fundamental limits of lithium-ion (Li-ion) technology are essential for the transition away from fossil fuels,” Stephen Grifford and Dr. James Robinson of the Faraday Institution describe in a paper. “Lithium-sulfur technology has the potential to offer cheaper, lighter-weight batteries that also offer safety advantages.”

Going electric also opens the door for a renaissance of electric vertical take-off and landing (eVTOL) vehicles. It is easier to evenly distribute an electric propulsion system than it is for traditional combustion engines, which has historically been a major factor holding back eVTOL technology. eVTOL technology could usher in a Jetsons-like future of flying taxis and cars that help a bustling city stay more connected. Although several prototypes already exist for these small eVTOL crafts, as companies develop the technology and seek regulatory approval, it’ll probably be a decade or more before the technology becomes more widespread.

Electric planes do have a significant advantage over other ways to fly: electric vehicles overall require less maintenance because they have fewer moving parts, electricity is cheap, and it’s easy to generate. An electric flight costs four to six dollars per operating hour, whereas planes burning jet fuel cost $1000-$2000 per operating hour. In addition to being much more economical to fly, electric planes are much quieter than their carbon-burning counterparts, making them more comfortable for passengers and staff.

The power of hydrogen

Hydrogen is a great fuel for us to use in internal combustion engines. It’s colorless, odorless, non-toxic, and packed full of clean-burning energy. Hydrogen is abundant on our planet, though bonded in chemicals like water and methane. Many of hydrogen’s properties make it safer to use than gasoline, according to some experts. So, why aren’t we flying more hydrogen-fueled planes? Mostly because of current limitations in our infrastructure capacity and the engineering of planes.

Though hydrogen has the highest specific energy of any non-radioactive fuel, liquid hydrogen only has a quarter of the energy by volume as jet fuel. For a plane to get the same energy from hydrogen as it would from jet fuel, it needs a storage tank about four times larger. Generally, to make room for the extra storage, manufacturers have been sacrificing the total number of seats or they’ll make the airframe a little bigger.

Companies like ZeroAvia have started by designing externally-mounted storage tanks for small planes carrying 20 people 500 miles or less, probably the upper limit for what this solution can do. Airbus has revealed three concept planes of varying sizes that could enter commercial service by the 2030s, including a short-haul and a long-haul plane.

Infrastructure, mostly in the way we produce hydrogen, is one of the main issues holding back hydrogen-powered aviation. Steam-methane reforming is a widespread method for hydrogen production, in the United States, it accounts for 95 percent of all hydrogen produced. This method relies on natural gas and works by mixing hydrocarbons with water, producing carbon monoxide and hydrogen as a byproduct. However, this method of mining hydrogen isn’t carbon-free and would just shift aviation’s carbon pollution somewhere else.

Fortunately, hydrogen can be produced through a process called electrolysis. This allows you to produce hydrogen from renewable sources; all you need is water and electricity. Electrolyzers need to get electricity from a renewable source like solar energy in order to produce hydrogen in a sustainable way. When hydrogen is produced in a carbon-free way, a hydrogen fuel cell only releases water and heat as a byproduct when it’s burned. Because we lack infrastructure for producing hydrogen cleanly, it’s currently an expensive fuel to manufacture. We have been producing hydrogen at scale for various industrial functions for a century, so we know it can be done. Now it needs to be expanded in a carbon-free way.

The way we travel is going to change a lot over the next century. The modern world runs on fossil fuels, but electric and hydrogen power will fuel the world of tomorrow. We’re changing our cities, revitalizing public transit, expanding high-speed trains, reengineering our ships, and reimagining our planes. It’s too soon to say if hydrogen or electricity is going to be dominant, but one thing is probably certain: both will have a prominent role to play in our industry as we move towards a carbon-free future.