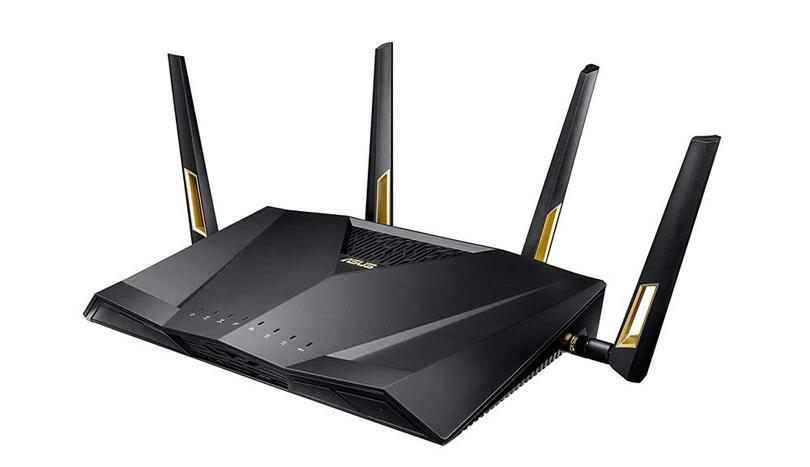 Wi-Fi 5 (802.11ac) has been the leading wireless networking standard since it first appeared on the scene in 2013. Its ability to deliver multi-band connectivity with theoretical throughput speeds of up to 5.4 gigabits per second (Gbps) have kept it dominant for more than half a decade, but a successor officially launched last year and now products are finally showing up in significant numbers. Wi-Fi 6 (802.11ax) ushers in a new era of wireless networking, boasting theoretical speeds of up to 9.6Gbps. However, there’s a lot more to Wi-Fi 6 than speedy throughput. More client capacity, enhanced battery life for client devices, better security, and increased efficiency are also on the benefits list, and these routers are now available in a variety of configurations with prices starting as low as $70 for budget router models, though climbing past $600 for top-of-the-line devices.

That’s a rather large swing price-wise, so before choosing a Wi-Fi 6 router try not to think about money as the primary differentiator and instead think about why you want to upgrade to Wi-Fi 6 (our handy guide can help). Once you know it’s the right move, start by calculating the size of your coverage area and the number of clients that will be connecting to the network. In addition to PCs, tablets, gaming consoles, and phones, be sure to consider the ever-growing list of connected smart home devices, such as cameras, doorbells, locks, and smart TVs to name a few. As always, the wireless routers with more numerous I/O ports, robust management tools, and blazing throughput potential will be likely be the most expensive. But once you’ve figured out who and what you’ll be connecting to your network, you’ll know if you really need one of these high-priced machines, or if a less-expensive model will do. In this guide, we tell you what you need to know to make an informed decision when buying a new Wi-Fi 6 router and offer up our latest Wi-Fi 6 router reviews.

For those wondering what exactly Wi-Fi 6 is, it’s good to cover exactly what this new standard entails and why it’s important. Wi-Fi 6 is another name for 802.11ax, the newest generation of wireless tech and an evolution of the popular 802.11ac (Wi-Fi 5) standard, which many of today’s routers and client devices use to connect to one another and to the Internet. Besides Wi-Fi 6’s primary benefit is a theoretical throughput bounce from 5.4Gbps to a maximum 9.6Gbps, which PCMag’s router testing has so far confirmed though with varying numbers among the different players. But there’s more to Wi-Fi 6 than faster speed, including greater client capacity, better range performance, as well as reduced network congestion and power consumption.

Wi-Fi 6 also adds entirely new capabilities to your router’s arsenal, such as the Orthogonal Frequency-Division Multiple Access (OFDMA) protocol. OFDMA enhances throughput by breaking Wi-Fi channels into sub-channels and allowing up to 30 users to share a channel simultaneously. Target Wake Time (TWT) is a power reduction scheme that allows Wi-Fi 6 devices to decide when they will emerge from a power-saving sleep mode to begin sending and receiving data. Smart devices such as security cameras and video doorbells are expected to benefit from TWT technology, as are smartphones, tablets, and laptop PCs.

Another area of improvement is channel size. Wi-Fi 6 doubles the channel width from 80MHz to 160MHz and that helps create faster connections between the router and its clients. It also broadcasts over previously unused radio frequencies to deliver faster throughput performance over the 2.4GHz radio band. Uplink and downlink MU-MIMO streaming are also on the menu as is enhanced QoS (Quality of Service) via uplink and downlink bandwidth management, and WPA3 encryption.

Earlier this year, the Federal Communications Commission (FCC) opened up parts of the 6GHz spectrum for unlicensed use. This new technology, dubbed Wi-Fi 6E, will offer 1200MHz of new spectrum and support multiple non-overlapping 80MHz and 160MHz high-speed channels. In a nutshell, Wi-Fi 6E means more bandwidth and faster throughput. To take advantage of all this newfound bandwidth, you’ll need both a router that supports Wi-Fi 6E and clients that can connect to the 6GHz radio band, and neither will be available until the end of this year. Nevertheless, you should keep Wi-Fi 6E in mind if you’re looking to upgrade your network sometime next year.

As with any router, you’ll find that Wi-Fi 6 routers come with a wide variety of features that can bring specific benefits, though typically with the side effect of a bigger dent in your wallet. The big benefit is higher performance, but there are other benefits available as well. Those with a specific focus, especially gaming routers, will likely include features specific to that specialty while ignoring other capabilities, so be sure you’re getting everything your network will need.

If you’ll be connecting wired devices like gaming consoles, home automation hubs, and network attached storage (NAS) drives, look for a router that has at least four LAN ports. Many high-end Wi-Fi 6 routers support link aggregation which utilizes two gigabit LAN ports to provide increased throughput for things like large file transfers and network traffic load balancing. This also helps serve as a fail-safe in the event that one LAN port stops working. Some of the more advanced models are equipped with multi-gig LAN ports that can handle 2.5Gb, 5Gb, and 10Gb connection speeds.

If you’re looking to connect peripherals such as printers and external hard drives to your network, make sure your Wi-Fi 6 router is equipped with at least one USB 3.0 port. Two or more USB ports are even better as they let you connect multiple devices without having to unplug one to connect another. With an external drive, a quick USB port, and router software that supports it, you can build your own secure NAS device that’s accessible from not only your network but the Internet.

If there’ll be kids connecting to your network, make sure they stay safe on the Internet and look for a Wi-Fi 6 router that comes with built-in parental controls. Most routers come with basic parental controls that let you create access schedules, block certain websites, and deny internet access to specific devices on your network. But if you really want to keep tabs on your child’s online activities, you’ll need more granular controls. Many Wi-Fi 6 routers come with free or try-and-buy versions of parental control software that works with your phone and a mobile app and lets you do things like pause Internet access with a single click and create profiles for each member of your family. The more robust controls let you monitor site visits and total online time usage and offer customizable age-based presets that will automatically block access to social media platforms and sites that contain things like adult content, , shopping, torrent downloads, and online gaming.

In that vein, any network should make security a priority, which means thinking about antivirus and malware protection. Some Wi-Fi 6 routers come with software that protects your network and all of your connected clients from viruses, phishing schemes, spyware, adware, and other cyber threats. Look for anti-malware tools that will detect malware in real time, quarantine infected devices, and remove malicious content from client devices. More often than not, anti-malware tools are bundled along with parental controls and come with free trial subscriptions, although there are a handful of router vendors that offer free lifetime subscriptions.

An oft overlooked aspect of network security is visitors. If you’re going to entertain guests in your home or office and offer them wireless network access, do you really want to give them complete access? Nearly all of today’s Wi-Fi 6 routers offer a guest networking feature that lets you grant internet access to visitors, using a separate SSID and password, without giving them full access to everything else connected to your network, like NAS devices, printers, and all your laptops and desktop PCs.

Last, if your house has one or more online gamers vying for bandwidth, or if you do a lot of high-res video streaming, make sure your Wi-Fi 6 router offers strong Quality of Service (QoS) settings that let you allocate bandwidth to specific client devices or protect certain kinds of network traffic. Some QoS settings allow you to enter an actual number (in Mbps) to make sure devices like gaming consoles and smart TVs have adequate bandwidth for lag-free gaming and smooth 4K video streaming, while other settings offer presets for specific applications. Simply tap a button to grant or revoke priority bandwidth for any device on your network.

Other specs to consider are the number of radio bands, the processor (CPU) type, and the amount of flash memory and RAM that a router uses. As hinted above, dual-band routers use one 2.4GHz radio and one 5GHz radio, while tri-band routers use a single 2.4GHz band and two 5GHz bands. Tri-band routers are ideal for high-traffic networks because you can designate specific radio bands to certain applications. For example, you can perform large file transfers over one of the 5GHz bands, which frees up the other two bands for things like web surfing and video streaming.

As with desktop and laptop PCs, beefier specs mean faster speeds. Look for a Wi-Fi 6 router with a quad-core CPU and at least 512MB of RAM and 512MB of flash memory. Additionally, more antennas typically provide better overall wireless coverage, which is why you’ll see as many as eight antennas on high-end routers.

Another important and rather broad spec to consider is whether you want a Wi-Fi 6 router or a Wi-Fi 6 mesh networking system. While the latter are only just coming out, they offer potentially easier setup and more even coverage for larger homes. For more details, read about The Best Wi-Fi Mesh Network Systems. And once you’ve purchased one, check out our primer, How to Set Up a Wi-Fi Mesh Network.

Is a Wi-Fi 6 Router Worth the Premium Price?

As with all other types of routers, Wi-Fi 6 router pricing is based on hardware specs, performance capabilities, and features. Budget Wi-Fi 6 routers can cost anywhere from $70 to $100, but these are typically bare-bones, dual-band models that use low-end components such as dual-core CPUs, offer low data rates, and lack features such as USB ports, anti-malware software, and multi-gig LAN ports. At the other end of the spectrum, a high-end Wi-Fi 6 router designed for gaming can cost upward of $600. For that kind of money you get all the bells and whistles, including multi-gig LAN, AX11000 speeds, three radio bands, built-in malware protection and parental controls, quad-core processing, and a dedicated gamer-friendly operating system.

With all this in mind, take a look at the top-performing Wi-Fi 6 routers we’ve tested so far and compare them spec by spec below. Once you’ve found the right router, read our tips for setting up your router and boosting your Wi-Fi signal.

As a Contributing Editor for PC Magazine, John Delaney has been testing and reviewing monitors, HDTVs, PCs, servers, and other assorted hardware and peripherals for more than 14 years. A 13-year veteran of PC Magazine’s Labs (most recently as Director of Operations), John was responsible for the recruitment, training and management of the Labs technical staff, as well as evaluating and maintaining the integrity of the Labs testing machines and procedures.