The Best Graphics Cards for Compact PCs in 2020 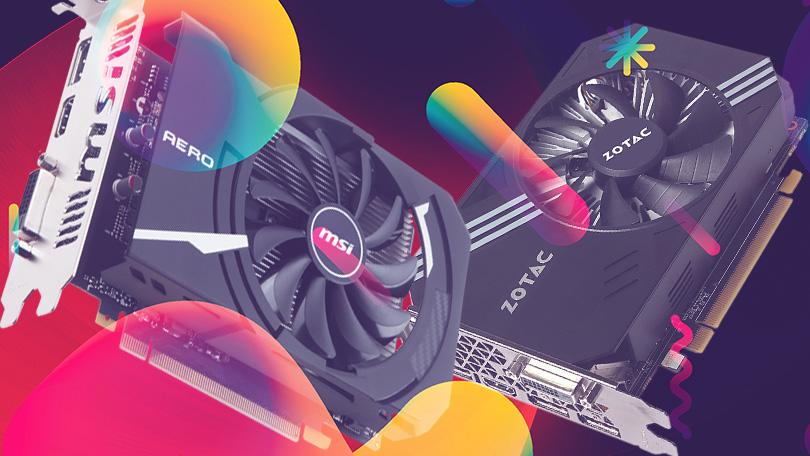 How to Choose the Right Graphics Card

A hulking, full-tower PC is always your best option if you want room for multiple graphics cards, general upgrades, or all the terabytes of storage you could ever reasonably afford. But these days, you don’t necessarily need one if you want a powerful PC that can handle editing high-def or 4K video, playing new AAA games at 4K, and powering virtual-reality (VR) headsets.

As more and more PC enthusiasts and boutique-PC builders have shown interest in compact performance systems, many case makers have offered up comparatively compact chassis that have room for midsize or even full-size graphics cards. For instance, the shoebox-shaped SilverStone Sugo SG12 has room enough for a graphics card over a foot long. That means the largest and most powerful cards available, such as the Nvidia GeForce GTX 2080 or AMD’s Radeon VII, should have plenty of clearance in that case.

The similarly compact Cougar QBX Ultra Compact Pro Gaming Mini-ITX Case has an even smaller footprint, and it has nearly 14 inches of clearance for beastly graphics cards. Just note that specialized compact cases like these usually require a MicroATX or Mini-ITX motherboard, rather than a more standard (and often less expensive) full-size ATX motherboard. Their unusual proportions mean that they may be able to take big video cards, but not big mainboards. 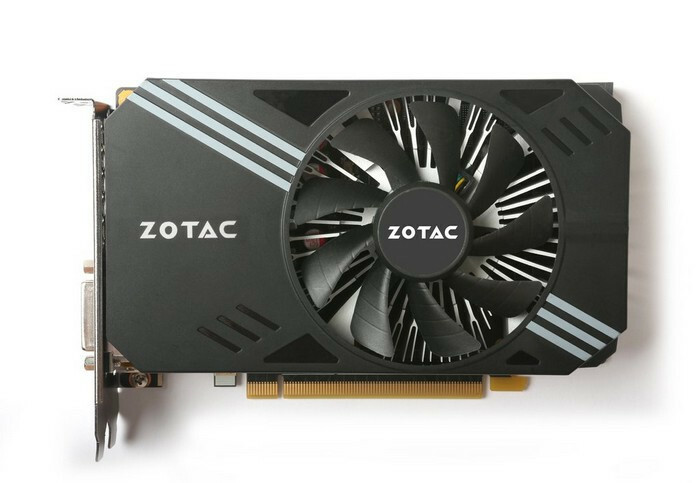 It’s possible to build a gaming-ready system even smaller, using a truly trim case such as the Cooler Master Elite 110 (which is just 11 by 10 by 11 inches). It can include an Intel Core i7-8700K or Core i7-9700K processor (the best chip you can reasonably use these days in a PC this small) and a powerful graphics card like the Zotac GeForce GTX 1650 Super Twin Fan or one based on the newer GeForce GTX 1660 or GTX 1660 Super. Those cards aren’t extreme performers, but they do support VR gaming and can handle today’s hardiest non-VR titles on high settings at 1080p (1,920-by-1,080-pixel) resolution.

It’s All About the Fit

For graphics-card considerations specifically (which is likely why you landed here), the most important thing is how much card clearance the PC chassis that you own (or are considering buying) has available. This is often listed on the product page under “specifications,” or in an online manual. But in a pinch, you can pop off the side panel and do a rough estimate yourself, with a tape measure or ruler.

Inside the case, find the area where the PCI Express card expansion brackets are, usually at the back. This is the spot where the video-output ports on a graphics card will show through the back of the chassis. Measure from there, parallel to the PCI Express slot into which you’ll install your card, to the first obstruction you run across. That’s your maximum card length, assuming your card does not have power connectors sticking out of its trailing end. If it does, you’ll need to compensate for that. (Most of the time, these days, the connectors are on the top edge of the card.) 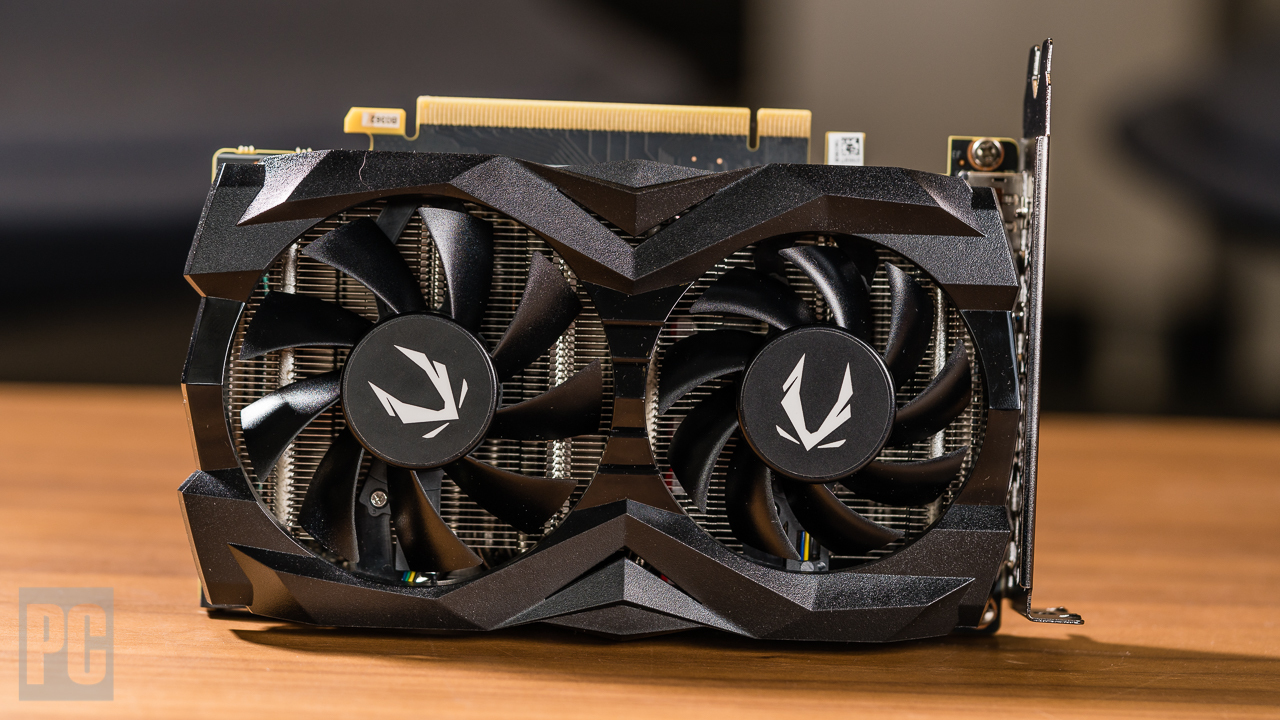 If you want to fit a high-end gaming card, also be sure there’s room for mounting the card across two expansion slots, because just about all such cards occupy at least two bracket positions across. Some very compact PC cases may not have very much space between the PCI Express slot you’ll use for a card and the nearby case wall, which might prevent you from installing a card at all. If you’re upgrading an existing system, at least an eyeball check is much advised.

The distance between the bracket area and the nearest object on the other side of the case (often a hard drive mount or bay, or the wall of the case itself) will determine how long a graphics card your system can handle. If the case has 10.5 inches of clearance or more, you’ll be able to fit most high-end cards, including most ultra-high-end cards based on, say, Nvidia’s GeForce RTX 2070 or GeForce RTX 2080. It’s likely that most AMD cards will be shorter than this length, as well, but always double-check before buying; there are always exceptions. The PowerColor Red Devil Radeon RX 570, for example, is a bit more than 11 inches long, despite not being all that powerful a card (compared to Nvidia’s high-end offerings, anyway). 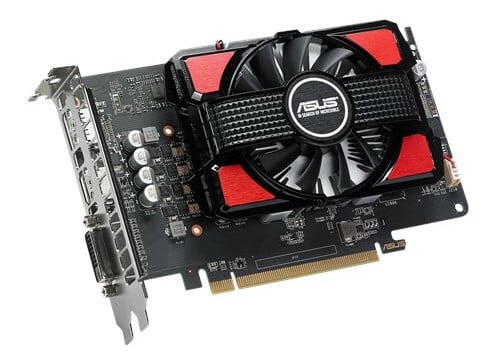 For smaller PC cases that still have room for a full-height graphics card, you’ll need an air-cooled card that may be 8 inches long or less. That may sound generously big enough, but as gaming-class graphics cards go, that’s tiny. But even here these days, you have a few options on that front.

Take a Peep at the Power Situation

Another factor to consider when building a compact PC is power supply (PSU) cable routing. While many cards on the market will keep their power-pin connection ports on top of the card (and equally as many compact or Mini-ITX cases are made to support this design), a few may opt to put the pin connector on the rear-facing edge of the card instead.

If you’re already working in a constrained space and every inch of the total card measurement matters, you’ll want to be sure that wherever your card plugs into the PSU (if it does at all, more on that below) is accommodating to all the other parts and pieces you’re trying to squeeze into a confined area.

That said, many compact cards won’t even ask you for a dedicated PSU power connection in the first place. Several options on this list, including the Zotac GeForce GTX 1650 OC and its PNY-made twin, don’t need an external connection because they already pull all the watts they need from the PCI Express slot they’re plugged into.

Keep in mind that these cards have limitations on the amount of graphical horsepower and overclocking capacity they can support without an external power source. But if those aren’t major concerns of yours, then you might want to go this route to avoid any cabling issues in the first place.

You’ll note that we’ve talked about card length, but not much about card height. A few thin PC cases (usually flat, broad ones meant for home-theater-PC use) accept only what are called “low-profile” expansion cards, among them low-profile PCI Express graphics cards. These cards are much shorter in the vertical dimension than an ordinary video card, and they can be outfitted with what’s known as a low-profile or “half-height” bracket. (You twist a screw or two to install the shorter bracket in place of the ordinary one.) This enables the card to mount on the vertically smaller PCI-slot frame.

There’s usually room for just two ports on a half-height bracket, or in a few cards we’ve seen, the half-height bracket is two slots wide, allowing for a third port. So know that multi-display connectivity is often a bit compromised on these cards, especially with the low-profile bracket attached. 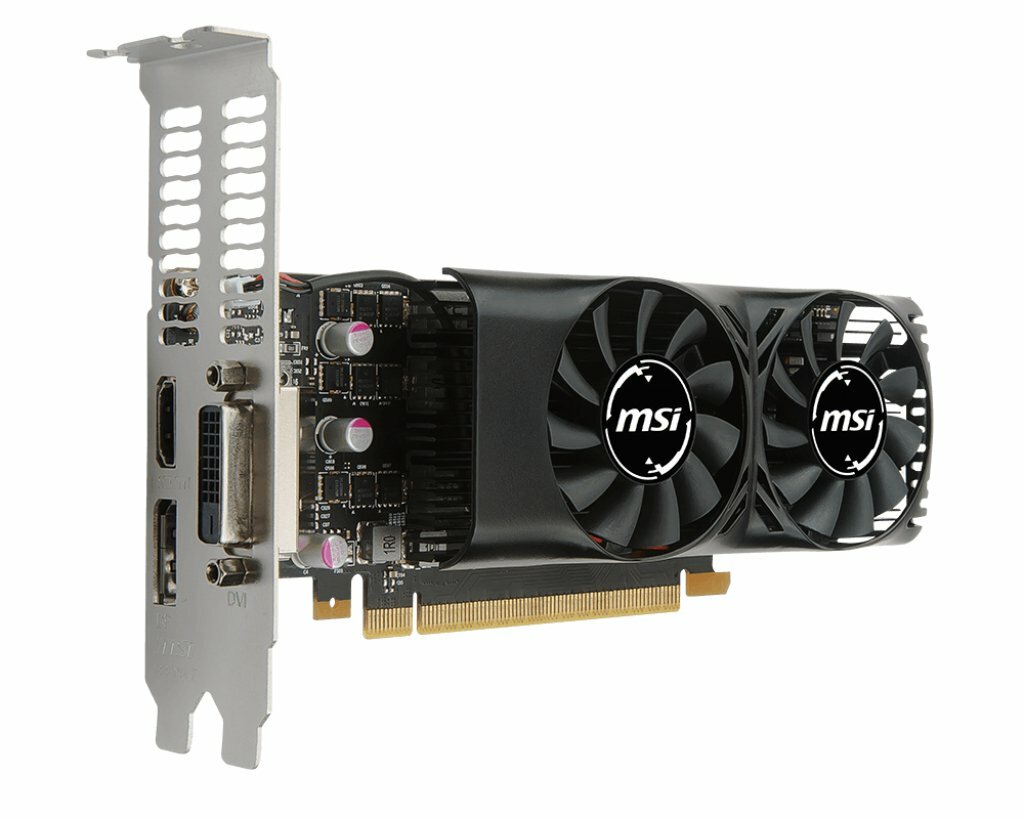 Because low-profile boards are much smaller in surface area (and thus the room for a graphics chip, power circuitry, and cooling apparatus is reduced), they are budget-minded, basic cards, meant as a step up from CPU-integrated graphics or to add support for multiple displays. The brawniest low-profile card that we’ve seen for gamers of late is the last-gen GeForce GTX 1050 Ti 4GT LP from MSI.

Ready for Our Recommendations?

As always, size and features for video cards based on a given graphics chip can vary significantly, depending on the model and the card maker. Nvidia and AMD make “reference cards” based on their graphics processors. Third-party partners—MSI, Sapphire, EVGA, Asus, and many others—then make and sell their own branded cards, some of which adhere to the design of these reference boards. They also offer “custom” versions with slight differences in shape and size, the configuration of the ports, the amount and speed of onboard memory, and the cooling fans or heat sinks installed.

Compact video cards fall into that custom class. Because of that, if you’re shopping for a card for a compact system, or you have a particular case in mind, be sure the size, power, and cooling demands of the card you’re buying match up with the chassis you’re planning on putting it in. Few things in the gaming world are more frustrating than getting a promising new graphics card in the mail, or carting it home from the local superstore, only to find out it doesn’t fit in your PC, or your power supply doesn’t have the juice (or requisite connectors) to get it going.

If you have a bit more room to play with in your PC case, check out our roundup of the best graphics cards for 4K gaming, which will be bigger cards. (Also check out our master guide to the best graphics cards overall, heedless of size.) And complete your custom build with one of the top M.2 solid-state drives we’ve tested. These tiny SSDs are a perfect match if you’re space-strapped.