The Best Cheap Phone Plans for 2020 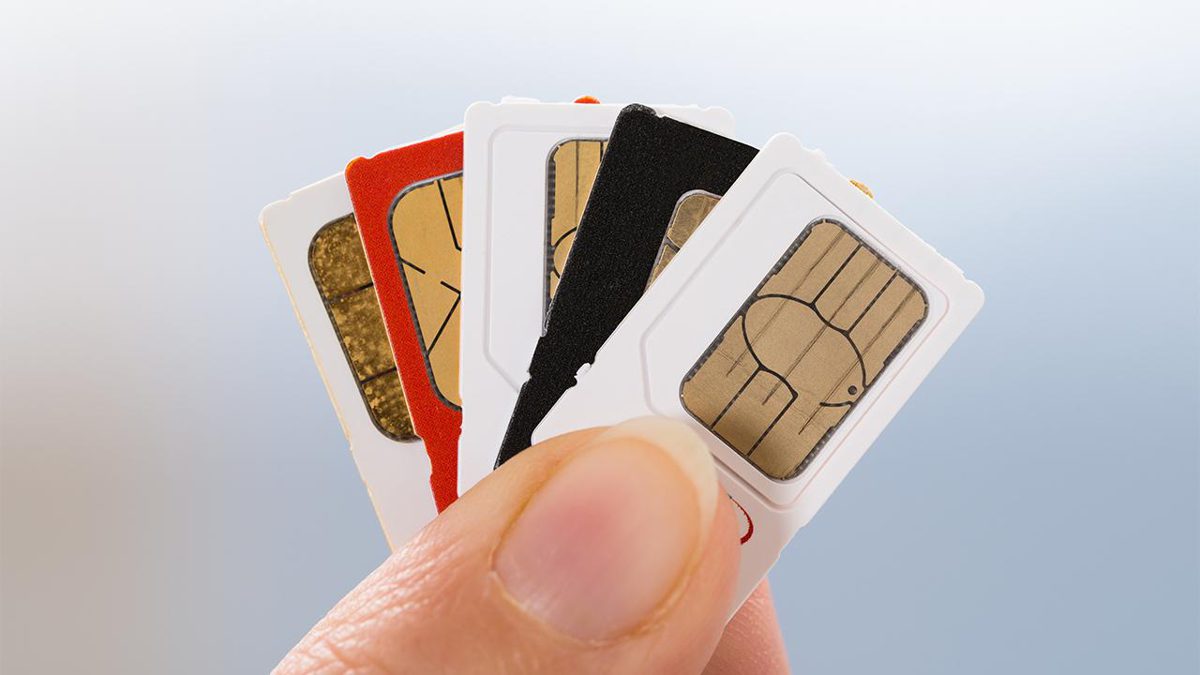 While most Americans are signed up with one of the major carrier brands—AT&T, T-Mobile, US Cellular, or Verizon Wireless—there are many more choices available to US cell phone customers looking for a bargain. Known as MVNOs (mobile virtual network operators), these low-cost carriers piggyback on the major networks and can deliver lower prices, especially for individual users who aren’t looking to be part of a family plan.

All the major carriers have low-cost brands, and their deals are worth checking first. AT&T runs Cricket Wireless. T-Mobile currently owns Boost and Metro, though it is in talks to sell the former off to Dish Networks. Verizon owns Visible. If you’re looking for a wide range of stores and solid customer service, these brands have excellent prices and should be your first shopping stops. We’ll mention them below when appropriate.

For the other brands, which typically don’t have stores, pay attention to their reputation for customer service and to their enabling networks. Some MVNOs give you an option to choose between different enabling networks, and some are tied to only one. One company, Google Fi, uses T-Mobile and US Cellular’s networks interchangeably on some phones, but for the rest, you have to choose which network you want when you buy your SIM card.

We’re ordering our picks by how much you want to spend per month, to give you the best value at every price level. Depending on your needs, even one of the big three networks could have a plan that works for you. For the best carrier service where you live, check out our results for the Fastest Mobile Networks.

Which Phones Work With These Networks?

Some of the smaller carriers do not sell their own phones or limit their selection to low-end phones that may be locked to their network. We recommend purchasing a cheap phone that is compatible with multiple carriers. You can also check with the carrier to see if your current phone works on its network if you’re looking to save a little money.

Most unlocked phones are compatible with AT&T and T-Mobile, and with any carrier that uses their networks. If you’re looking for an unlocked phone that works on all three major US systems, look at any factory-unlocked iPhone that’s of the 8 or later varieties, the Samsung Galaxy S9 or higher, the Google Pixel line, or the Moto E or G models. Or take a look at our list of The Best Unlocked Phones.

What About Customer Service?

In general, when you turn to these less-prominent carriers, you’re not going to get the sort of customer service you get from the major networks. The issues we hear about most involve new service activations and billing. Since there are no retail stores for the smaller carriers, any problems you encounter have to be handled by an outsourced call center employees who often have limited resources and knowledge to adequately address your problem. Just do a search on Reddit and you’ll find plenty of cautionary tales about small MVNOs. We’ve done our best to research all of our recommendations closely, but it would be wise to do some searching on your own before you pull the trigger.

If that worries you, there are two lesser-known carriers that consistently get strong ratings for customer service: Consumer Cellular and Republic Wireless. You can also turn to the wholly owned brands of the big carriers, which have their own store networks: AT&T’s Cricket, and T-Mobile’s Boost and Metro. Verizon’s Visible doesn’t have any stores, but it does have Verizon behind it. 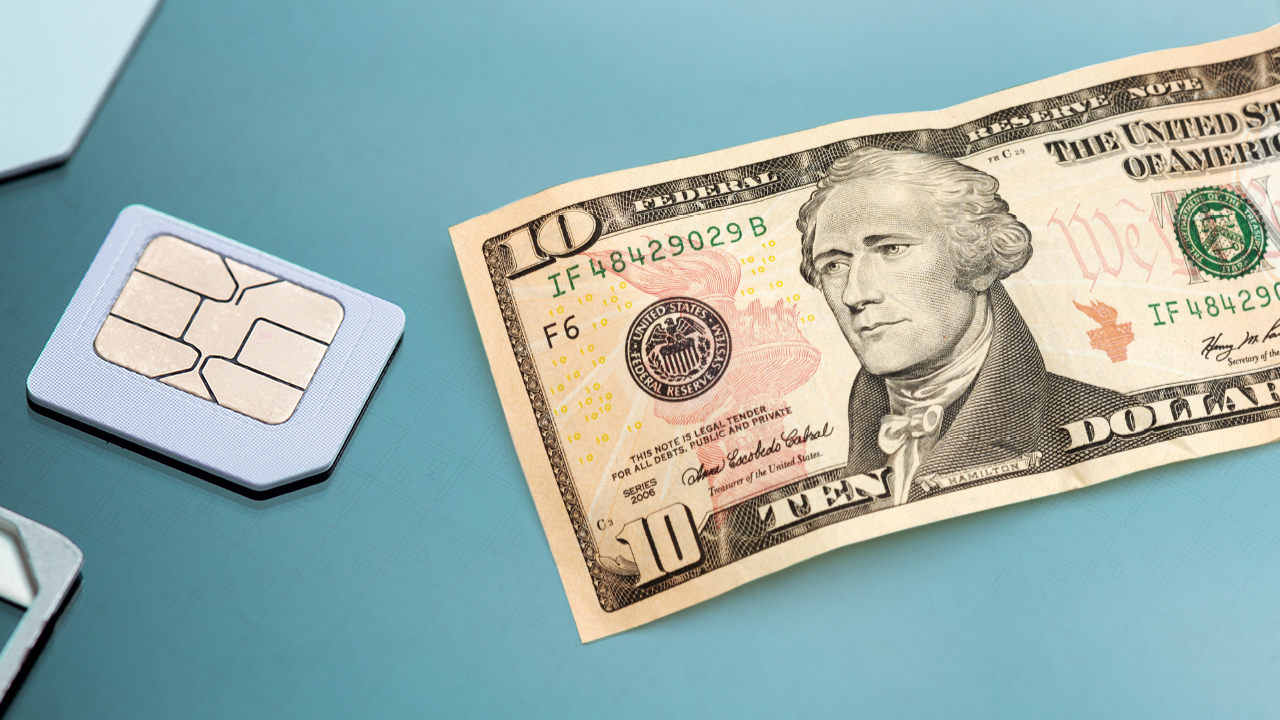 Cell Phone Plans for $10 or Less Per Month

While it’s possible to get mobile service at $10 a month or less, the number of carriers offering such deals are in steep decline. Even when plans come in at the $10 mark, most do not include taxes and services that can nearly double the price, depending on where you live.

Right now, there are three carriers we recommend that offer solid service at a rock-bottom price. Tello, which piggybacks off of T-Mobile’s network, offers the most bang for your buck. On its website you can create a custom plan with unlimited calls, texts, and data for $10. It’s a solid deal if you have an old Sprint phone or are looking to buy an unlocked phone that works on multiple carriers.

RedPocket’s Essentials Plan comes in at $10 and gives you 500 minutes of talk, 500 texts, and 500MB of data. It’s also the only MVNO in this price range that has relationships with all the major carriers, so you can select the option with the best service in your area.

If you use a feature phone or need very little LTE data, US Mobile is good choice. The carrier offers a custom plan for $9 a month that includes 500 minutes of talk, 300 text messages, and 100MB of data. And while US Mobile doesn’t sell phones directly, you can choose a SIM that works with Verizon or T-Mobile phones, so there’s a good chance your current phone, or one you’ve had your eye on, will work on its network.

We know there are fans of TracFone out there, but to get its cheapest rates you need to play a complicated game of minute-doubled reload cards, so we’re not including it here. 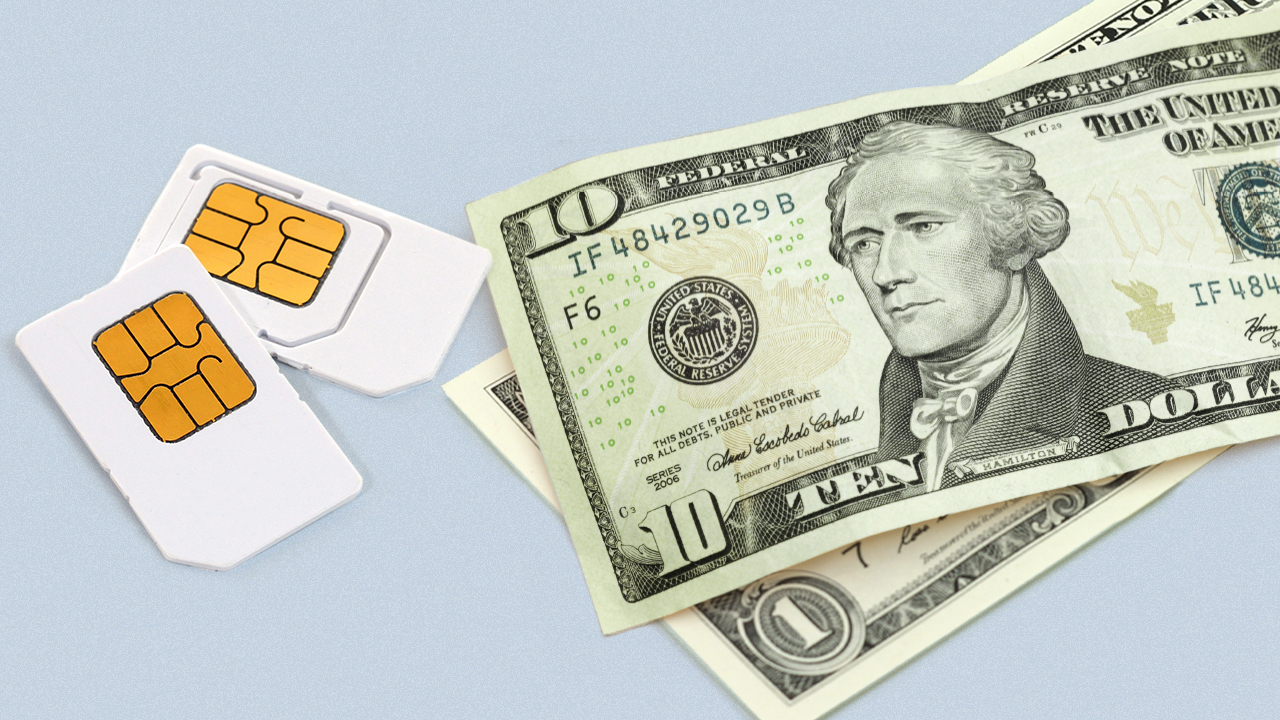 While it may be a little more expensive than other small carriers, Consumer Cellular offers a simple, senior-focused plan with excellent customer service. With AT&T as its backbone, you can expect solid coverage around the country. Its lowest-cost, sweet-spot plan has 250 minutes, unlimited texts, and 250MB of data for $20 per month. If you’re looking to drop your landline altogether, you may want to shell out an extra five bucks and get the plan with unlimited calls and text with 250MB of data.

If you’re not afraid of commitment and are willing to pay for service a year in advance, Mint Mobile has an excellent plan. You can get unlimited text and calling along with 3GB on T-Mobile’s network for just $15 a month ($180/year). If you want to give the service a try before pulling the trigger, Mint also has an introductory offer for the same plan that costs $45 for three months.

Republic Wireless plans have become much more competitive in recent months. Its best deal is its $20 plan, which has unlimited talk, text, and 1GB of data on the T-Mobile network.

US Mobile is another solid option in this price category. You can create a plan for $20 on its network with unlimited talk, text, and 1.5GB of data on T-Mobile or Verizon. 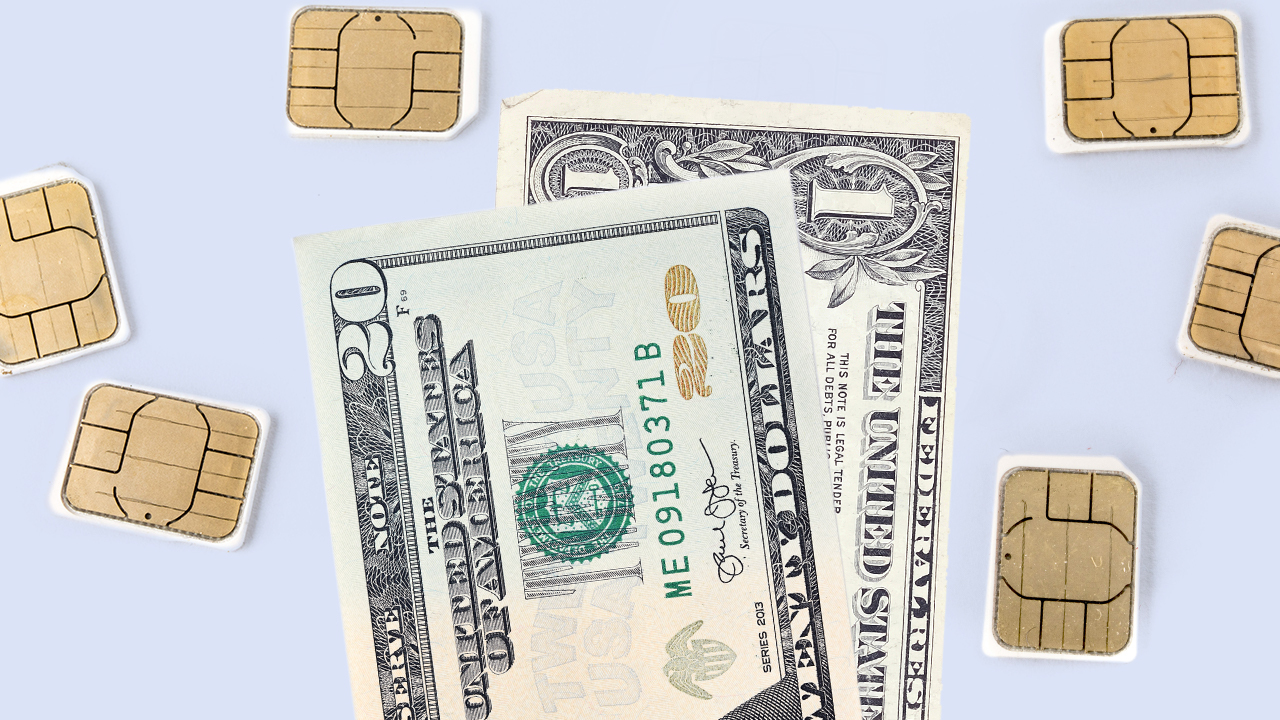 Over the past few years, plans in this category have started to creep up past the $30 mark, so there is a less diverse selection of offerings. That said, the plans that do still fit into this category are more competitive than ever.

Ultra Mobile is the most solid option here, and offers a great plan that caters to customers who make international calls. For $29, Ultra Mobile offers 5GB of LTE data on the T-Mobile network and unlimited calls to 80 different countries.

Tello offers unlimited calls and texts with 6GB of data on T-Mobile’s network for $24. If you need a little more data, there’s also a plan with 8GB of data for $29.

Mint Mobile has 8GB and 12GB plans in this price bracket, but you have to pay for a year in advance. A year’s worth of 12GB/month comes out to $25/month, which is a pretty terrific value.

The best deal on AT&T’s network in this price bracket comes courtesy of AirVoice. For $30 a month you get unlimited calls and texts along with 6GB of data. Since AirVoice has been an AT&T reseller for years, it’s fiercely competitive and usually manages to undercut its competitors like PureTalk and h2O. 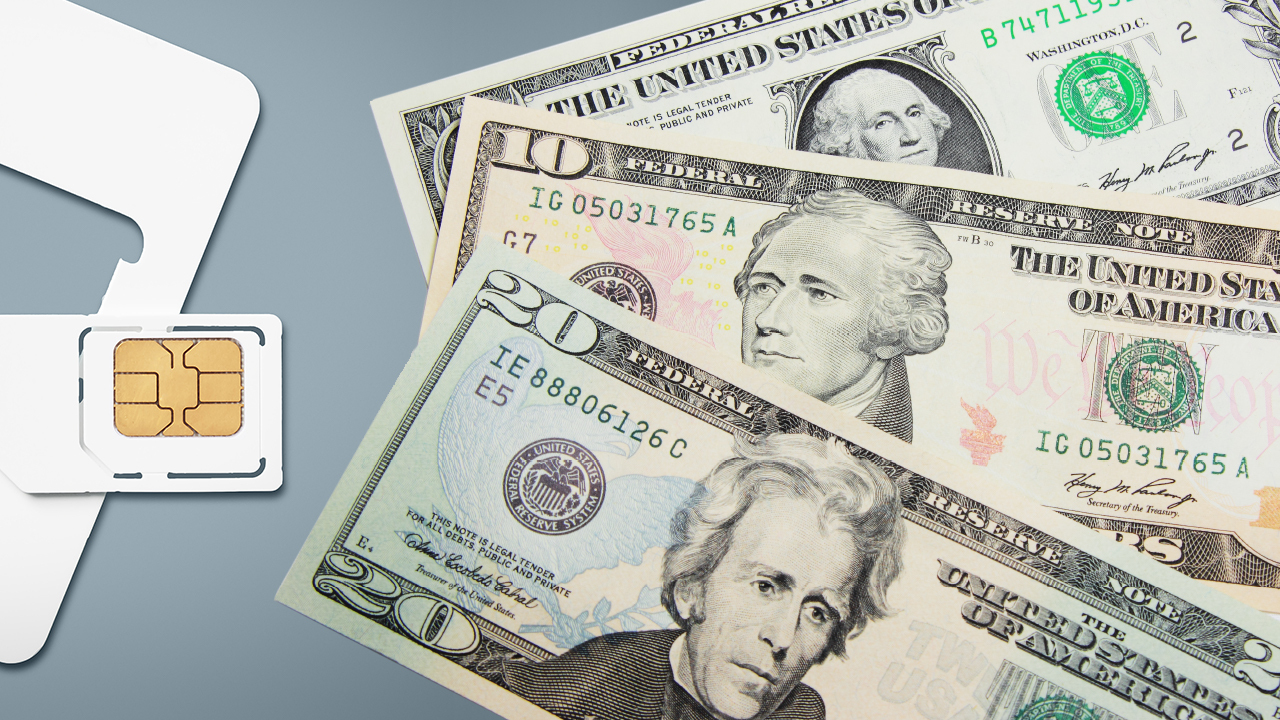 Although there are a couple of plans we recommend in this price range, it’s an awkward spot. Slightly less expensive plans offer comparable services and, if you’re willing to pay a few dollars more, you can get unlimited service. Nevertheless, there are two plans worth mentioning.

Frequent international callers who use a moderate amount of data should check out Lyca Mobile’s $35, 6GB plan that offers unlimited calls and texts to 80 different countries.

Verizon charges premium rates for its network. If you’re looking for moderate use, Walmart’s Total Wireless offers the best deal. The company has a $35, 5GB plan that looks good. 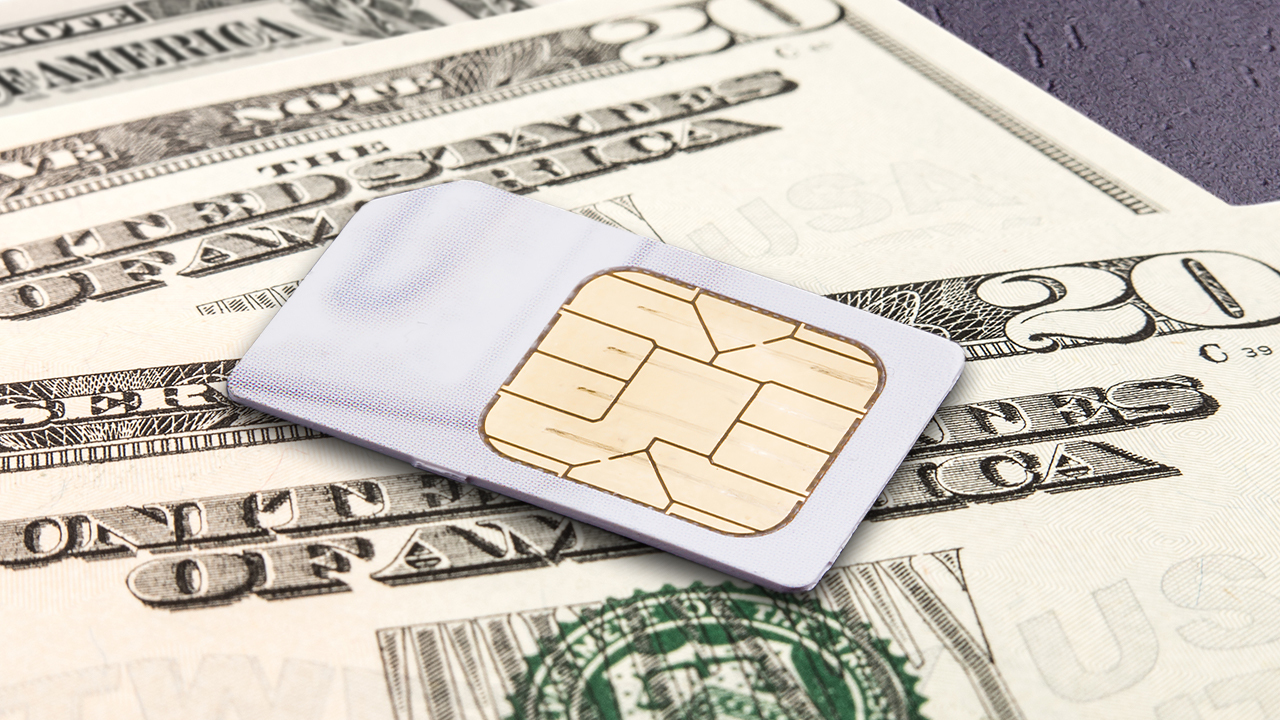 If you’re looking for a truly unlimited plan, Visible is your best bet. At $40, it’s the least expensive option with unlimited talk, text, and LTE data with no speed cap on Verizon’s network. It also offers customer service through app, phone, text, and web.

Some cable companies offer unlimited plans that are only slightly more expensive than Visible. If you’re a Comcast Cable subscriber, Xfinity Mobile gives you unlimited data for $45 per month on Verizon’s network, with speeds reduced after 20GB. Spectrum Mobile offers the same. It’s worth keeping in mind that you’ll be dealing with a cable company when there are technical or billing issues, which may top the mobile industry when it comes to frustrating customer service.

Simple Mobile on T-Mobile offers unlimited data for $50 a month, but at that price you’re probably better off choosing Metro by T-Mobile. For the same price, Metro also offers 100GB of Google One storage and has a network of retail stores around the country should you encounter any problems.

AT&T’s subsidiary Cricket is on the pricey side at $60 per month for unlimited, full-speed data capped at 8Mbps. 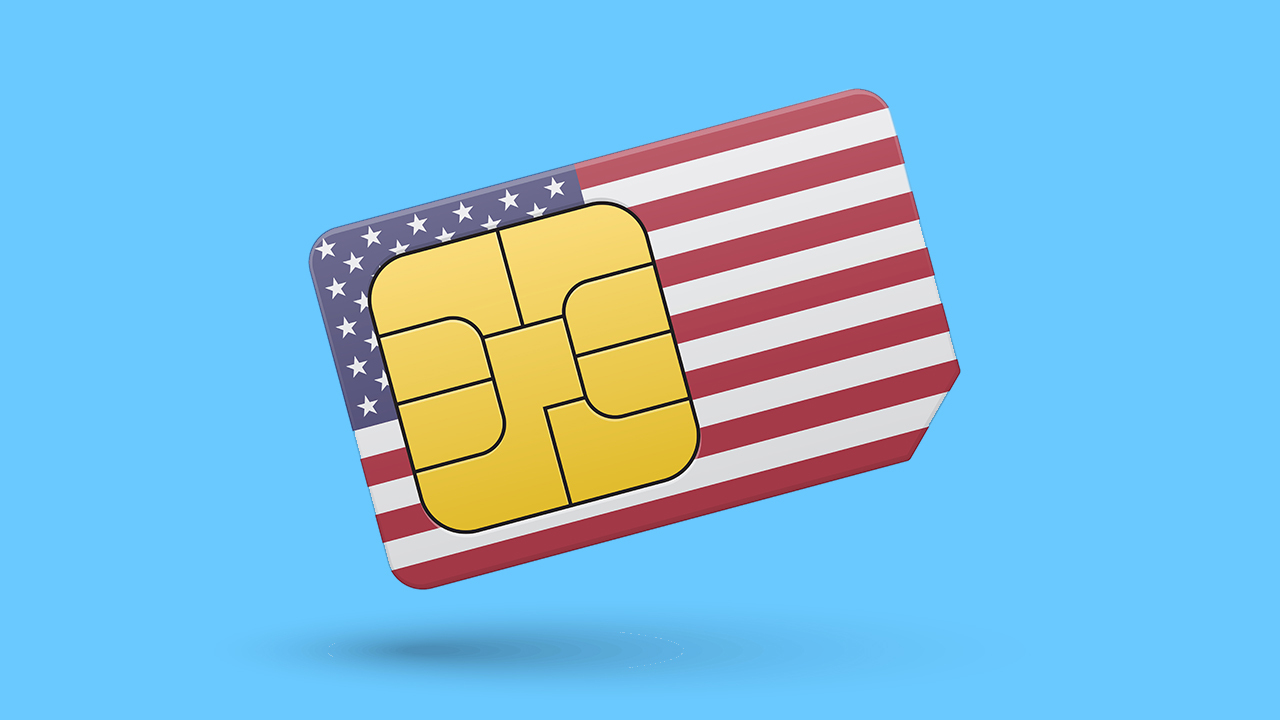 Phone Plans That Align With Your Beliefs

Are you passionate about your political or social beliefs? Want to put your money behind causes you believe in? There are a handful of wireless carriers that let you do just that, and charge you a hefty penalty for the luxury.

Credo Mobile donates one percent of your bill to left-wing causes. The carrier runs on Verizon’s network and charges a whopping $45 for a 3GB plan. Each month, Credo Mobile will donate 45 cents from your bill to progressive charities.

On the right wing of the spectrum, Catholic-oriented Charity Mobile leases space on AT&T’s network and donates five percent of your monthly bill to pro-life charities. It doesn’t list the charities it supports, which is concerning, and we’ve contacted the organization multiple times for more information but have yet to hear back. Its Partner for Life plan offers unlimited calls and text with 2GB of LTE data at $37.90.

Patriot Mobile may be expensive, but it’s upfront about where five percent of your money is going—to the NRA, the Tea Party Patriots, and the Heritage Foundation, among others listed on its site. It offers a plan with unlimited talk, text, and data for $55 a month.

That said, none of the carriers in this category are a very good deal. If you want to support causes you believe in, you’re much better off donating the difference in cost between these carrier’s plans and one of the less-expensive options above.

For example, Patriot Mobile charges $35 a month for unlimited talk, text, and 3GB. The same plan on Republic Wireless costs $25. Both lease service from T-Mobile. If you subscribe to Patriot Mobile’s $55 plan for one year, the company will donate a total of $21 on your behalf. If you chose Republic Wireless and save the difference, you’ll have a $120 tax-deductible donation at the end of the year. Similarly, you can sign up for an unlimited plan with Visible rather than Credo and donate the difference in money you save each month.

And if your mission is to boycott carriers that support causes you’re against, your logic is flawed. All of these MVNOs lease from one of the major carriers, so your money indirectly supports their lobbying and community involvement efforts.