The Basin Between Texas and New Mexico Leaks Heaps of Methane 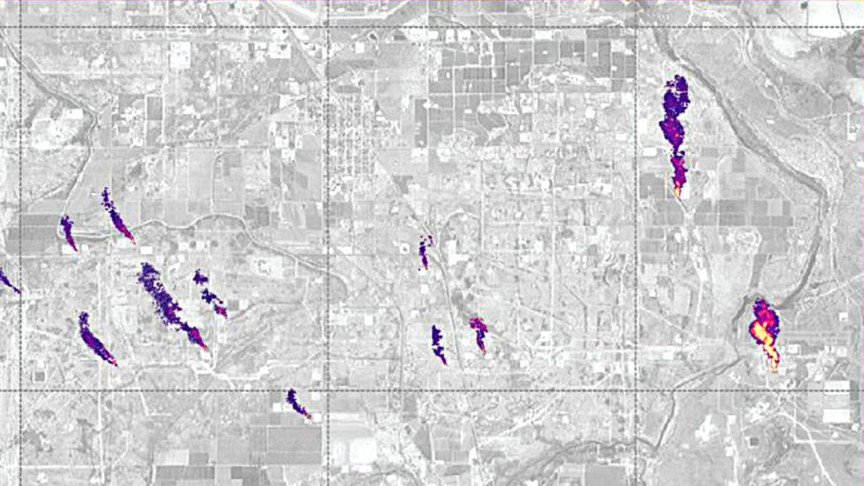 In November of 2019, we brought you a NASA study that used an airborne sensor to depict where methane is being emitted from throughout the U.S. The team had then discovered that a third of all methane emissions were coming from just a handful of ‘super-emitters.’

Now, a new NASA study, published this week in Environmental Science & Technology Letters, is pinpointing 123 methane leaks in the Permian Basin that if fixed could slash emissions by an unbelievable amount. The study was first reported by Gizmodo.

The authors wrote “The Permian Basin is the largest and fastest growing oil and gas (O&G) producing region in the United States. We conducted an extensive airborne campaign across the majority of the Permian in September–November, 2019 with imaging spectrometers to quantify strong methane (CH4) point source emissions at facility-scales, including high frequency sampling to evaluate intermittency, ” in their study abstract.

What they discovered is nothing short of impressive.

Nearly 30% of the emissions came from just 11% of the sites surveyed. This amounts to around 123 out of the 1,100 sites where emissions were detected. Fixing these 123 leaks was estimated to have the potential to reduce methane emissions by 55 tons an hour, or roughly 5.5% of the methane emissions in the entire U.S.

The researchers however could not determine what was causing the extra leaks and whether it was easily fixable or not.

“The question of whether a leak is easily and readily fixable, your mileage may vary,” study coauthor Riley Duren, a research scientist at the University of Arizona and an engineering fellow at NASA’s Jet Propulsion Laboratory, told Gizmodo. “There’s a difference between ‘fixable’ and ‘easily fixed.’”

Still, Duren added that most operators were eager to fix any issues once alerted to them. The study offers much hope that more can be done to reduce the methane emissions partially responsible for the pollution.