The Android 11 features that will actually change your phone 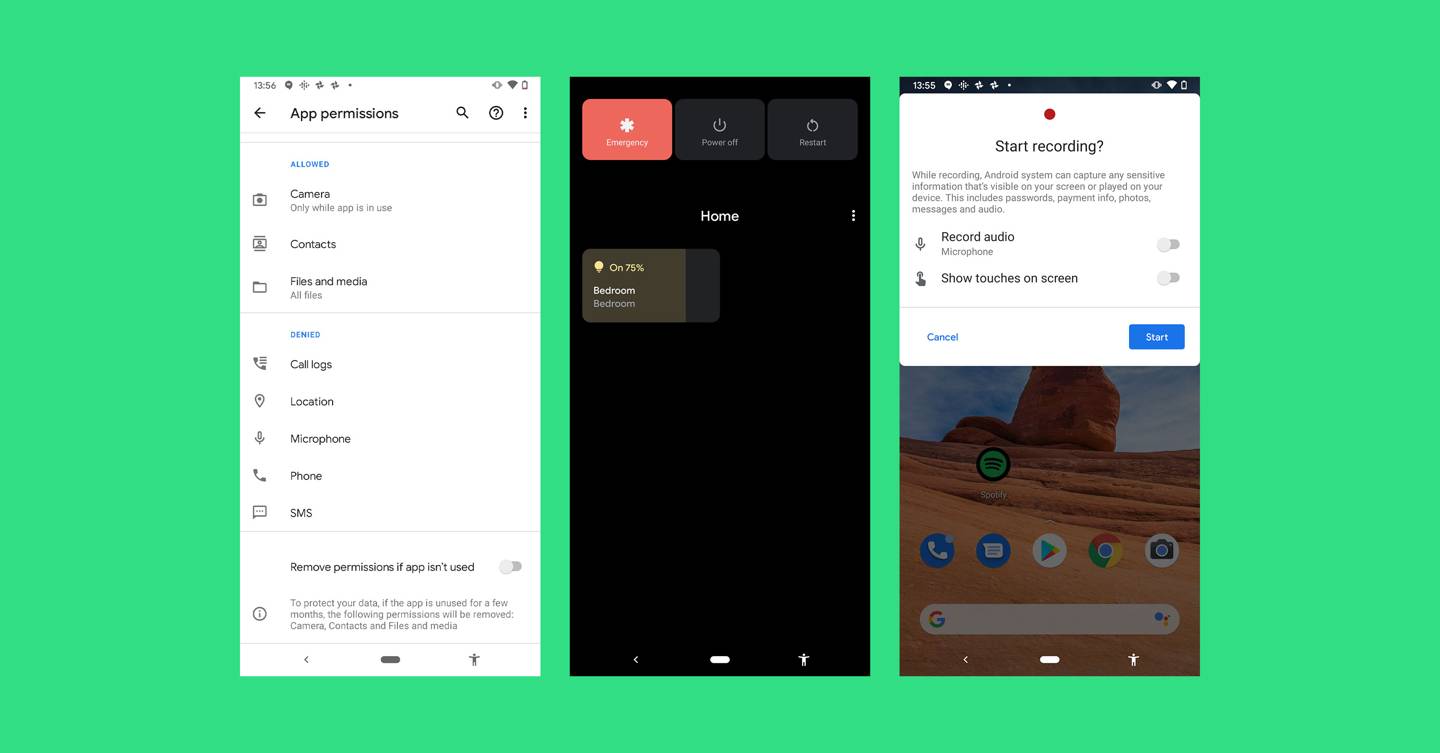 Android 11 will be released later in 2020 like clockwork, but developers and anyone happy to put up with a half-finished operating system – bored much? – can try it out now. A beta of the software is available here for Pixel 2, 3, 3a and Pixel 4s. It has some, but not all, of the features of the final version.

We’ve taken a look at the beta on one of Google’s Pixel smartphones to see what progress has been made. On reflection, some changes are long overdue, the kind of tweaks a 2016 buyer might expected to see in six months rather than four years. But we do get, at least, the addition of some useful changes already in place in Android 11.

The Google Home speaker was released back in 2016, and was a bold sign of intent: Google wants to control your home. That home control should now feel better in Android 11.

Long-press the power button and you’ll see a new control screen. There are the usual buttons to reset and power off your phone, but most of the screen is given over to Home. You can add shortcuts to devices linked to your Google Home app, perhaps for the smart lights in your bedroom.

Want to turn them all off as you leave the house? There are now fewer steps involved. Android 11 does not currently auto-populate this page; you choose the controls that sit in the Home power panel. A little effort is required, then, but it avoids this part of the OS becoming instantly overstuffed and unpalatable.

They may be no more than widgets placed out of the way, but this panel sees smart home tech given greater prominence in Android.

App permissions are a headache that will not go away. Most of us treat them like the Cookies disclaimers and T&Cs documents we carelessly click through.

Android 11 tweaks the system’s approach and this may mean we end up having to validate more app permission requests for the camera, our location and file system access. There will be the option for one-time access, which grants that access while the app is running, and for a “short period of time” after being bumped off-screen into the background.

It will also start pruning the permissions of apps you have not used for “a few months”. However, in the Android 11 Beta at least, this needs to be manually switched on in the Permissions part of Settings.

These techniques are designed to stop apps leeching data they should not have access to, and may stop bad apps impacting your battery life. It’s a genuine security improvement that edges Android closer to the standards of iOS. However, app permissions will continue to be the unavoidable irritant they are today.

A focus on conversations

Google is in the process of redesigning how Android 11 handles chats. The first change is simple. There is now a separate section at the top of your notifications for conversations, from apps like WhatsApp and Google Hangouts. They get higher billing than your emails, missed calls or the step count reminder you’ve only taken 300 steps since breakfast. Android 11 also separates notifications that actually come with an alert and silenced ones.

Chat bubbles will have a more significant effect on how Android 11 feels. Conversations in apps like Facebook Messenger and WhatsApp can hang around as little avatar bubbles on the edge of your phone screen. Tap them and they expand to a text box in which you can reply.

It’s much like the Chat Heads of Facebook Messenger, a feature introduced in 2013. And its tentative implementation in the Android 11 beta build available to the Pixel 3a XL suggests Google is still working out how to make it useful rather than annoying.

It’s only available in the Developer Options part of Android, and in our test phone bubbles still do not appear in Google Hangouts even after switching them on. Bubbles work using an API, so it will be up to developers to implement them with an update.

More clutter for your Android? Perhaps. There is certainly more “stuff” added to Android 11. For example, you can now rifle through your notification history over the last 24 hours by scrolling to the bottom of the drop-down, where a link sits.

Voice Access for Android has been around since 2018. It’s an app that lets you control your phone with your voice, mapping little numbered icons onto each tappable area of the screen.

It’s not completely new then. But Google says Android 11 adds an “on-device visual cortex” that improves the feature. We spent a few hours comparing Voice Access on a Pixel 3a XL with Voice Access on a OnePlus 8 Pro running Android 10 to get to the bottom of the real change involved here.

Initially, the two look the same. On the average view of WIRED’s front page you might see 40 or so labels. You can say that label’s number to “proxy tap” it or, in some cases, you can read out the link’s text to head to it. To launch an app whose icon is on-screen, for example.

Both versions let you head to the home screen wherever you are. And, when Voice Access decides to play along, you can scroll with a voice command.

Android 11’s changes are all to do with context and intelligence. For example, say “wired.co.uk enter” when filling in the address bar on the OnePlus 8 Pro and you end up with exactly those words in the bar. But Android 11 takes “enter” as the command, taking you right where you want to be.

The new version is also a little better at knowing you want to load an app when there’s also some oblique reference to that app on-screen, such as Twitter.

Voice Access is more intelligent than before but there’s still a huge amount of work to be done here. Google’s speech interaction is lauded as the best around but you still can’t, for example, ask to share a page you’re on. And simply asking to scroll down an article refuses to function more often than it works. This is a work-in-progess, but hopefully it will improve further before Android 11 is actually released.

Google has also made it easier for you to become a remote tech teacher for your less savvy friends and family, by cleaning up the screen recorder function added in Android 10.

There are no real new features here. In Android 10 you can already capture a video that shows your screen prods and swipes, and records the feed from the phone’s mic as well as any played audio. But the interface for Screen Record is much cleaner, avoiding a trip to the settings menu to alter what to record. It’s more friendly and will save you time, if not substantively different below the surface.

Android 11’s changes so far are not world-changing, but do at least focus on the ways we use our phones. There are changes to how media controls are displayed, your conversations with friends have greater prominence and we get a little more protection from apps that want to do dodgy things in the background. Smart home fans get a neat control panel too, which could be a major improvement if you have a stack of gadgets in your home.

We’d like to see greater improvements to Android 11’s accessibility features, though. The concept behind voice controls context-aware smarts are great, but in use they just don’t seem quite intelligent enough.