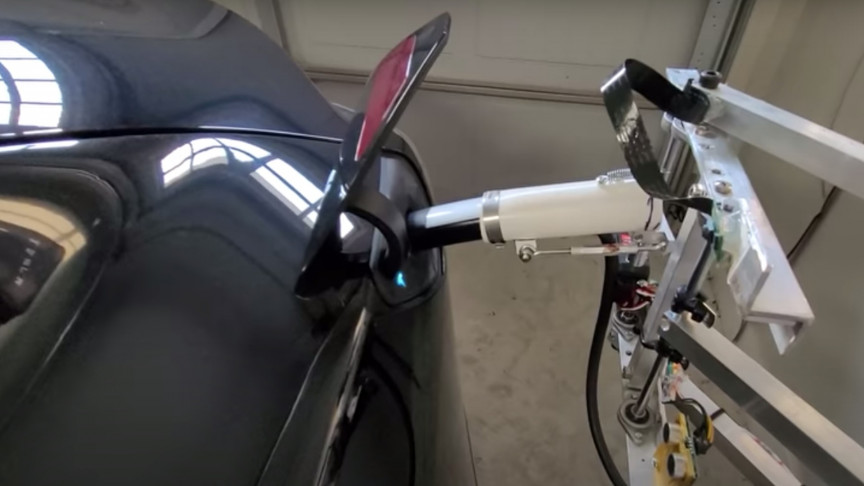 It’s not pretty, it’s not speedy, it’s not yet perfect, but it works, and it’s useful: It’s the homemade Tesla robot charger.

A Tesla owner who simply goes by the initials P L on his YouTube account shared his DIY automated EV charger’s capabilities in a short and fascinating YouTube video. The home garage charger slowly but surely plugs itself all on its own into the Tesla, and works its magic to power up the vehicle overnight.

The system is still a prototype, and its owner is fully aware of its current limitations — mainly speed — but it doesn’t require much space as it nestles along the garage wall, and, when prompted, uses its cameras and systems to connect itself with the Tesla.

The owner explains in his video that he uses a Raspberry Pi 4 as the brain of the robot, which is linked to a camera that can gauge where the charging port is.

The Tesla API is used to open the EV’s charge port door, so no physical human interaction on the car is needed.

All in all, it’s a cool contraption that could prove useful in many circumstances, especially once its spruced up and modernized.

It’s the not the first time robotic Tesla chargers are mentioned, as Tesla itself brought up the subject of metal snake charger robots in the past to power up its EVs. We have yet to see these robotic snake chargers, but they could make the concept of plugging in and charging up you car an even easier process — not that it’s extra hard as it is.

Other non-human charging techniques that automakers are looking into are solar-powered cars, that would simply use the power of the sun gathered from rooftop panels to charge up, like Hyundai’s IONIQ 5.

This technology is still a ways off, but it would be exciting to see it, just as it would be fun to see metal snake robotic chargers power up Teslas, and potentially other EVs.