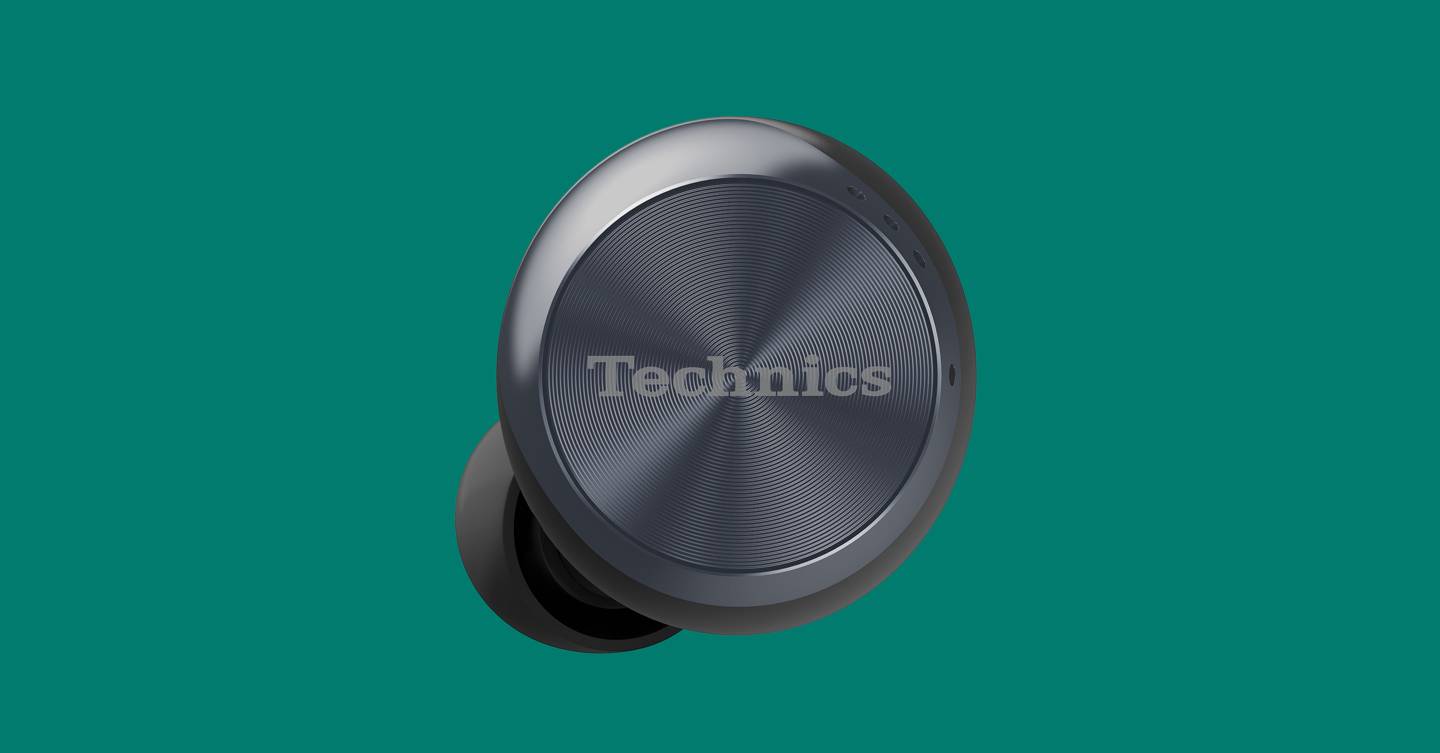 Technics, despite only re-launching in 2014 has the sort of ardent fanbase most brands can only dream of, and while most the product launches of late have been unashamedly high-end, we suspect parent company Panasonic will be – and quite sensibly – squeezing this brand loyalty for all it’s worth.

And while there have been some new headphones, such as the over-ear £200, EAH-F70N Noise Cancelling Wireless, Technics has been slow to jump on the true wireless wagon. Question is, with the EAH-AZ70W are they fashionably late to the party, or just late?

For people who want true wireless convenience, need active noise cancellation and are probably torn between the Apple AirPods Pro, the Sennheiser Momentum 2 and the Sony WF-1000XM3. They’ve got money to spend and appreciate audio quality, but they have over-ear headphones for that, and so when it comes to their commuter ear buds, they need as many functional features as possible.

Tasteful, stylish and therefore typically Technics, the EAH-AZ70W have enough executive polish to turn heads, and very little bling to turn anyone off. The metallic-effect plastic looks good, the lines are clean, the capacitive touch interface slick and the battery case suitably coordinated. They don’t shout, but good design rarely needs to.

The buds come with a range of silicone earpieces for accurate sizing, but there’s no ‘wing’ option, which might put off lug-eared runners and gym goers, which is a shame as they carry IPX4 certification, which means they’re splash and sweat resistant.

Technics has developed its own ANC called “Dual Hybrid Noise-Cancelling”, which blends both digital processing and analogue feedback. With three microphones, the processor analyses and blocks noise both from inside and out the headphones to help reduce unwanted voices and ambient sound. It works impressively, can be toggled off to let in ambient sound, but can’t quite match the peerless Sonys.

They also chose to link each ear bud independently to your phone, to create a more stable connection. This “Left-Right Independent Signalling System” also helps ensure there’s no delay between left and right channels on playback (something the AirPods Pro suffer from on rare occasions).

Being 2020, and costing £200+, the headphones are compatible with the usual voice assistants, and the Technics Audio Connect app give you plenty of options to tweak sound profiles, adjust ambient and ANC levels, check battery life and track down missing buds by revealing their last known location.

It’s also worth noting that Panasonic has also launched a new range of in-ear headphones that uses many of the same technologies as the Technics models, but with a smaller 8mm driver and a slightly less premium finish. The S500W will cost £169, while the S300W will cost £109 but do not come with active noise cancelling.

While the fit doesn’t feel as secure as a pair of AirPods Pro, the EAH-AZ70W are comfortable, and once you find the right sized silicone tip, they are reassuringly stable. We don’t want to go running in them, but for walking the dog and home working (including endless Zoom calls) they performed admirably. If you have especially skinny ear canals, they may be ideal for exercise, but we’re not making any guarantees here, despite the IPX rating.

Given the competition, anything but seamless connectivity would be a big issue, but no such problems for Technics, with simple connectivity and large, easy-to-use on-ear controls. It’s not hard to get it right.

The noise cancellation, while not as eerie as you’ll find with Sony, is also impressive, although to be honest, we’ve not run the risk of public transport to test out the effect it has on engine noise, and Disney+ in the background at home doesn’t really count.

The EAH-AZ70W feature 10mm graphene-coated dynamic drivers, used to improve strength and high and midrange frequency performance, while space has been found in each earbud for a tiny ‘Acoustic Control Chamber’, to manage airflow and optimise balance between frequencies.

It’s typical audio mumbo-jumbo, but whatever they’ve done under the hood works superbly here. The Technics EAH-AZ70W sound fantastic, with depth, presence and detail in glorious abundance. There’s a definite bias towards the low end, but it’s never to the detriment of the track. Rarely has bass sounded so taught and controlled, especially considering the size of these true wireless buds.

The Sennheiser Momentum 2s sound better overall, but there really isn’t much in it, and arguably the Technics fit better, are more comfortable to wear for longer periods, and they’re cheaper.

We’re all ’bout that bass, ’bout that bass. Forget the tasteful, executive looks, the ANC, the app connectivity and the cool Technics branding, because rarely have we heard a pair of headphones that manages to go so low, without muddying the rest of the mix.

For such a premium brand, why is the battery case so poorly designed? Yes, it has a nice logo and fetching metal effect, and holds the earbuds securely, but it’s bulky and uncomfortable in a trouser pocket. The elongated lozenge is a tried and tested design, but the added straight lines and angles means, unlike the AirPods or Jabra ranges, it just doesn’t slide in and out easily.

Also, given the size, we would hope for a bigger battery. Six hours from the buds is standard, but only 12 hours from the USB-C charging case feels a bit light.

The more we listen to the Technics EAH-AZ70W, the more we like them. The active noise cancellation is effective, the features list extensive and the sedate styling should be quietly applauded, but it’s the sound quality from the 10mm drivers that has us hooked.

For roughly the same price, they’re not as easy to use or as comfortable as the AirPods Pro, and they lack a bit of the bling you’ll find with BeoPlay or Beyer & Dynamic, but with true wireless earbuds it seems there’s always some sort of trade-off between the features you want and the compromises you’re willing to make to get them. If you need sound quality signed off ahead of everything else, you’ll not be disappointed.

📖 How coronavirus kills, one organ at a time

🎲 The best board games for adults and families