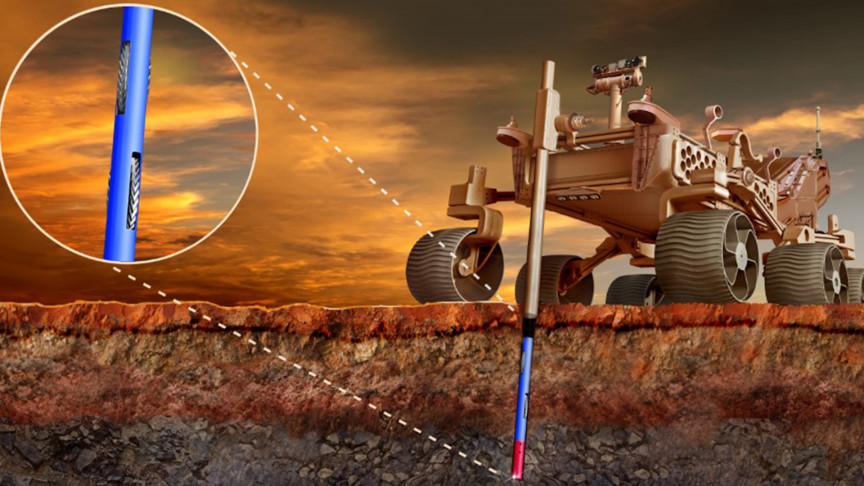 Though scientists know there might be liquid water underneath Mars’s polar ice, there’s one big problem when it comes to proving the hypothesis. No drilling system exists that is capable of drilling down the approximately one mile to reach it.

The pair has received a $125,000 grant from NASA’s Innovative Advanced Concepts (NIAC) program to develop their proposed idea for an autonomous drill for Mars exploration.

The ice on Mars isn’t the same as on Earth, Morley explains in a WSU press release. It includes layers of dust and ice, and might also have rocks or corrosive brines within those layers.

If a future mission tried to use a traditional drilling rig, it would need to transport a mile of steel cable from Earth as well as a replacement or two.

“It is, quite frankly, an engineering nightmare,” Morley said. “I figured a traditional deep drilling approach would be useless.”

The most advanced Mars probe to date has only been able to drill a few inches into the red planet’s surface.

In order to apply for the NASA grant, Morley and Bowen started a space company called Planet Enterprises. Both have extensive engineering experience having worked for Boeing and the U.S. Navy respectively while taking their college degrees.

‘Borebots’ concept is anything but boring

The drilling system the pair propose would use self-contained, one meter-long robots, or “borebots,” to drive up and down a borehole. A Perseverance-type rover would act as as a drill rig and would deploy the robots on the red planet.

About a dozen of the small borebots would be deployed, one at a time, from a tube on the rover deck. Each would drill down about 150 millimeters on a single trip while driving into the borehole, before returning and being replaced by another robot.

The students will spend the next nine months building simple prototypes, and modeling the technology and process, using 3D printing technology.

If the initial results are promising, the team can apply for a larger grant to develop the concept further. All of this could lead to groundbreaking discoveries:

“The first ice core taken could tell us more about the history of Mars than we currently know today,” Morley said. “If we can get to a depth of five or 10 meters, we may be able to cook ancient Martian atmosphere out of the core, which can tell us about Mars’ past in the same way ice cores from Antarctica tell us about Earth’s.”

Though Morley and Bowen are the first to specifically receive a grant from the NIAC program, they are not the first students to collaborate with NASA. This week, we reported on a student-designed 3D-printed rocket pad for future lunar missions — one of many designs devised as part of a NASA-student collaboration.