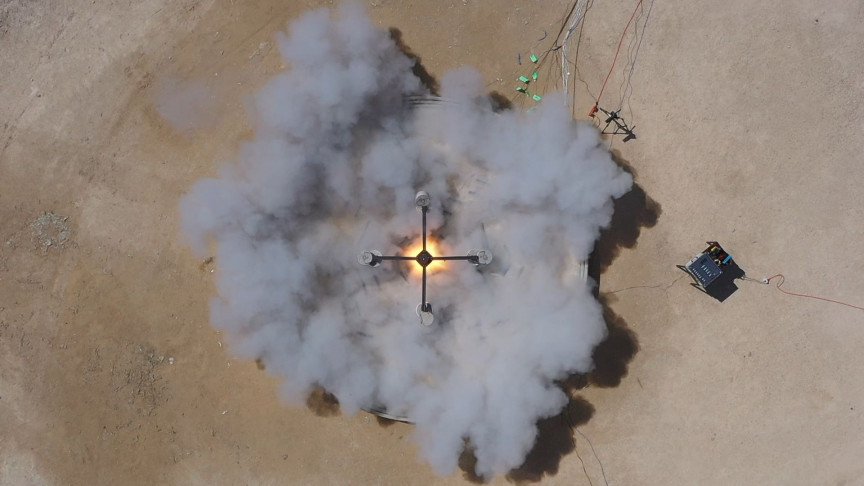 Based at a Texas Military Department location called Camp Swift, just outside of Austin, TX, a scaled-up version of the students’ prototype launch pad could be 3D printed for future NASA missions using materials found on the Moon, an ICON press release explains.

In October 2020, ICON helped the students build their subscale prototype launch pad, using a cement-based material and a gantry print system developed by the 3D printing firm. Last week, the teams reunited at Camp Swift to conduct static fire with a rocket motor on the 3D-printed pad.

“This is the first milestone on the journey to making off-world construction a reality, which will allow humanity to stay – not just visit the stars,” said Michael McDaniel, ICON’s Head of Design.

The rocket pad — dubbed the Lunar Plume Alleviation Device, or Lunar PAD — features a series of petal-like channels that send exhaust upward and outward, minimizing, minimizing the amount of dust propelled into the air by a rocket engine’s powerful exhaust.

The student team proposed their design in a paper on the Lunar PAD concept on Jan. 12 at the American Institute of Aeronautics and Astronautics’ 2021 SciTech Forum.

“The proposal addressed a technology pain point, as the project enables a safe and reusable landing pad required for sustainable lunar exploration,” Dankanich said. “The team worked many hundreds of hours, engaged NASA subject matter experts, and went from concept formulation to a preliminary design. They then turned that design into reality with the subscale construction, all in a few short months.”

The pad is essentially comprised of two layers. A “roof” where the rocket launches or lands, and a series of channels below the upper layer to safely redirect the exhaust.

A wall surrounds the structure, capturing any lunar dust particles that are projected outwards during a launch or landing.

For the prototype pad, instrumentation to measure temperature, strain, and exhaust flow behavior was implemented during printing.

With the help of NASA experts, the team conducted hot fire testing on the pad. Preliminary analysis suggests that the pad performs as it was designed.