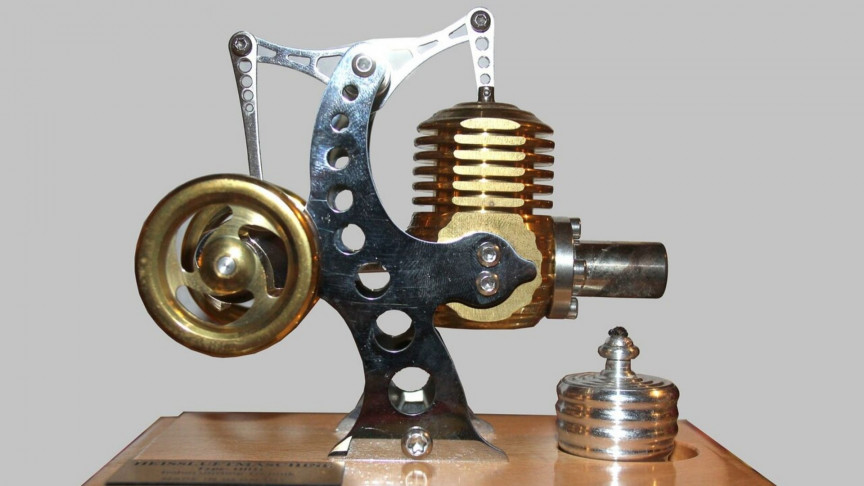 The stirling engine is a closed-cycle reciprocating external heat engine that converts heat into useful mechanical work. It was originally invented to compete with the steam engine, but due to its various limitations, even after many years, the Stirling engine has not seen mass-market adoption and is only used in a few specialized applications.

The gas inside a Stirling engine never leaves the engine. They are heated and cooled down again and again, so are never released in the form of an explosive exhaust. This regenerative engine has the ability to use the same gas repeatedly to generate power; therefore, a Stirling engine can prove to be much more efficient than the internal combustion engine used in modern-day vehicles. Because there are no explosions taking place, Stirling engines are very quiet. There is also no combustion, as the Stirling cycle uses an external heat source, which could be solar energy or even heat produced by decaying plants.

History of the Stirling engine

Robert Stirling filed a patent for the Stirling engine in 1816. His patent application was titled: Improvements for Diminishing the Consumption of Fuel, and in particular an Engine capable of being Applied to the Moving (of) Machinery on a Principle Entirely New.

Stirling’s patent application explained the construction and use of a regenerator (which he called an “economiser”). The patent also incorporated the first-ever description of a closed-cycle hot air engine. Moreover, Stirling described how his engine design could be used for applications such as powering iron smelting and glass furnaces.

For his remarkable invention, Robert Stirling is dubbed the father of the Stirling engine.

In 1827, a second patent for a Stirling engine was filed by Robert Stirling and his brother James Stirling. This patent proposed an inverted design from the original 1816 patent, which included a compressed air pump that was able to increase the internal air pressure for higher efficiency.

The third patent, filed in 1840, led to the invention of the famous Dundee engine that was later used by the Dundee Foundry Company. In a presentation given on the third patent in 1845 at the Institution of Civil Engineers, James Stirling emphasized that the Stirling engine technology was not only aimed at saving fuel but could also serve as a safer alternative to the steam engine. He reminded the attending engineers that the boilers in steam engines often explode and cause numerous deaths and injuries, and that these could be prevented by the use of Stirling engines instead.

However, the claims made by James Stirling couldn’t make up for the engine’s frequent failures when used at higher temperatures. Even the Dundee Foundry Company later replaced its Stirling engines with steam engines, after facing repeated cylinder failures in the years that followed its installation.

Although Stirling’s engines were manufactured until 1922, and used to pump water on farms and to generate electricity attempts to develop the Stirling engine for widespread commercial use proved largely unsuccessful.

The concept of the Stirling engine was all but forgotten for many years. However, the Philips company, in particular, took great interest in the Stirling engine design and licensed numerous patents based on the same technology from 1938 through the 1950s.

By 1952, Philips had developed a power generator with a Stirling engine as a drive. Although this never went into mass production, the research work conducted by Philips later led to the development of cryogenic cooling systems which use a reverse Stirling engine concept.

How does a Stirling engine operate?

A Stirling engine produces mechanical energy from heat energy by the movement of two or more pistons inside cylinders. A set amount of gas is present in the cylinder and the change in pressure of the gas caused by the Stirling cycle enables a Stirling engine to do work.

The Stirling cycle is composed of the following steps:

Energy from an external heat source increases the internal temperature, which further increases the gas pressure inside the cylinder. The rising pressure of the gas forces the piston to move down and work is delivered.

The piston pushes the heated gas into the second cylinder (or regenerator) where the gas is cooled, lowering its pressure so that it can be easily compressed further. The heat absorbed by the regenerator at this step will be used in the last step of the cycle.

The gas is compressed in a space that is maintained at an invariable low temperature, allowing the gas to easily undergo isothermal compression. During the compression, the gas releases heat to the cold sink.

The second piston moves up, forcing the compressed gas into the heated cylinder, where it quickly heats up again. The pressure in the cylinder builds up, undergoing isothermal expansion, forcing the piston to move, and the Stirling cycle continues.

The presence of a regenerative heat exchanger (regenerator) in the Stirling engine makes it much more efficient than other previous hot air engines which did not have this component. The efficiency of a Stirling engine is also directly proportional to the temperature difference between the heat source (step one) and the cooling source (step two).

Why isn’t the Stirling engine used in cars?

It is true that a Stirling engine can save you from the trouble of refilling the tank with gas every now and then, but there are some serious limitations associated with this engine technology that prohibits car manufacturers from utilizing it.

Stirling engines have no explosive exhaust, like that found in traditional internal combustion engines, therefore, they are very quiet and do not create any noise pollution. However, an external heat source is needed to make the engine work, and the time taken by the heat to travel from the source to the internal cylinder makes the Stirling engine less responsive than gasoline-based engines. This also makes it difficult for the engine to change its power output quickly.

Any renewable thermal energy source (such as solar, geothermal, or nuclear energy) can be used to run a Stirling engine, which potentially makes it an eco-friendly alternative. On top of this, it does not require much maintenance and is able to deliver higher efficiency than any modern-day internal combustion engine. Despite these merits, the higher initial investment cost and low specific power prevent automobile companies to employ Stirling engine technology in their cars, because in order to generate even a small amount of work, very large and heavy Stirling engines are required, which are not at all feasible to implement in passenger vehicles.

MOD II delivered exceptional results in the form of a super-efficient automobile engine that achieved a thermal efficiency of 38.5%. Under the Stirling engine program, NASA demonstrated the possibility of highly efficient Stirling engine-based automobiles, but soon the funding was cut down and automakers lose interest in the program. As a result, the projects could never reach the stage of commercial production.

Applications of the Stirling engine

A Stirling engine has the potential to supply almost limitless energy for a long period of time, with minimal harmful emissions and effort. Therefore, many large-scale applications that require continuous power could utilize Stirling engine technology to meet their energy requirements.

Closed-cycle regenerative engines appear to be a promising alternative to the steam turbines used in nuclear reactors. In such a case, liquid sodium could be used as coolant and water may not be required at all, Stirling engines can also increase the output of a nuclear reactor and decrease the amount of radioactive waste generated by the same.

In May 2020, NASA revealed that nuclear reactors equipped with Stirling engines could be used to meet the power requirements of human colonies in space.

Submarines powered by Stirling engines can stay underwater longer and are quieter than conventional submarines. Kocksums Shipyard, a Swedish submarine manufacturer, used Stirling engines for the first time in their Gotland-class submarines, which are now used by the Swedish navy.

When placed at the center of a parabolic mirror, Stirling engines are found to be more efficient in converting solar energy into electric power, as compared to photovoltaic cells.

According to a 2016 research paper, which focused on the role of Stirling engines for solar thermal electric generation, hot air engine technology can play a key role in minimizing the carbon footprint of humans by generating renewable electricity from solar radiation.

The waste heat produced by combined heat and power systems, also known as the cogeneration systems, can be utilized for agricultural and industrial purposes by the means of Stirling engine technology.

In March 2020, the Stirling power converter located in the Stirling Research Laboratory at NASA’s Glenn Research Center completed 14 years of uninterrupted and maintenance-free operation. This groundbreaking technology is a part of NASA’s Dynamic Radioisotope Power Systems (RPS) which the agency hopes may meet the surplus energy demands of its long-duration space missions in the future.

The Stirling engine is a 200-year-old technology, but it is yet to be utilized at its maximum potential. There is a strong possibility that the ongoing experiments and upcoming versions of the Stirling engine may lead us to a future with better, sustainable, and efficient energy solutions.