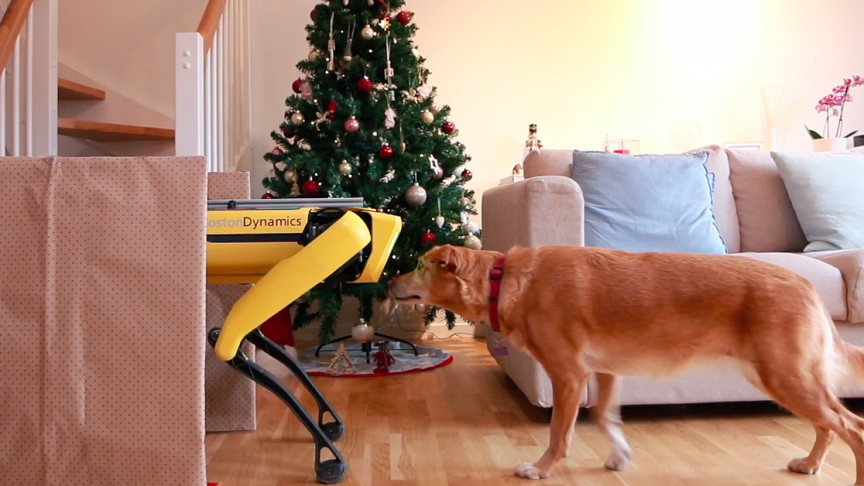 Christmas time, albeit in a socially distant matter, is here. From sipping hot chocolate in festive pajamas and sending letters to Santa to decorating an, preferably, artificial tree and listening to Mariah Carey’s All I Want For Christmas Is You nonstop, it is impossible not to feel giddy with the magic that’s happening all around us.

It is often that we see businesses dipping their feet in the snow and riding the sleigh in December, but one particular company’s brilliant video that mixes humanity’s most advanced technologies with its best friend has definitely taken the cookie this year.

Danish Technological Institute (DTI), which develops advanced robot technology primarily for the manufacturing industry, has an annual tradition of producing a short Christmas video where they try to bring a bit of Christmas cheer into our lives.

This year, after receiving two Spot robots through the Boston Dynamics’ early adopter program, they were inspired to help out a lonely and very sweet dog that wants a friend to hold hands and watch cat videos on YouTube with.

The video’s description box reads, “A dog’s life can be hard and at times lonely. But luckily there is help to be had,” which you can watch below. Prepare the tissues, but don’t worry, your tears will be, thankfully, short-lived:

The short video tells the story of a very lonely dog who had an epiphany one day: If the human is away all day, why not get yourself a robot companion instead?

After typing with its huge paws and ordering itself a Spot, the dog is happy at least and watches kitten videos on Youtube with its newly arrived friend, paw on mechanical hand.

The video is a perfect reminder of the potential of robotics in a way. In their day-to-day work, DTI is “always looking to broadening people’s horizon, inspiring new ideas and making stuff that works in the real world.” wrote Senior Communication Consultant Samuel Brøgger in an email to us. “Even though our holiday seasonal videos are clearly fictional, they help inspire people to the potential of robot technology – and bring some Christmas cheer as an added bonus.”

Brøgger explained that after busying themselves with their Spot robots in many different domains such as helping firefighters and guiding blind people, they decided they could also include one in this year’s plot. They were successful at bringing that Christmas cheer indeed!