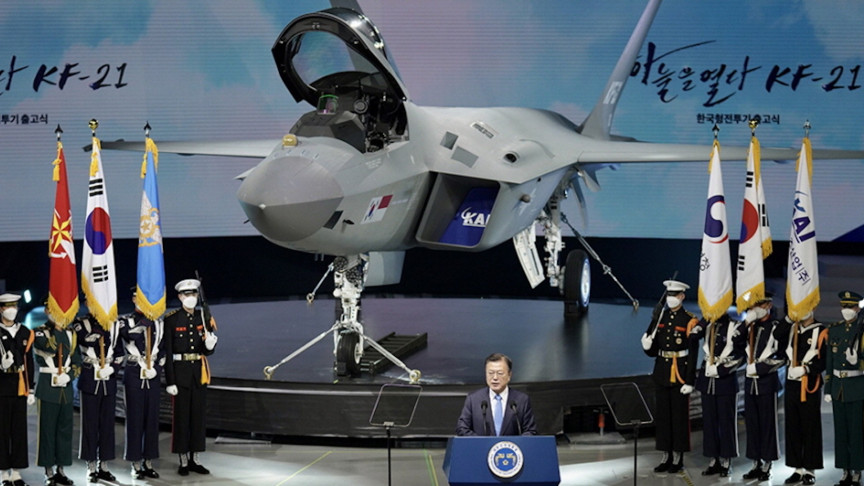 South Korea’s President Moon Jae-in said in an official announcement on April 9, that the nation has become only the eighth country in the world to manufacture a supersonic fighter jet with indigenous technologies. Around 65 percent of the jet’s individual parts are being produced locally.

The jet in question, the KF-21 “Boramae,” meaning Fighting Hawk, is a next-generation combat aircraft prototype built with the country’s own technology, and is part of the KF-X program. It’s set to carry out its first flight next year, and its development will be complete in 2026, said Korea Aerospace Industries.

Developing and using national technologies for such aircraft facilitates faster deployment of prototypes, and means parts are more easily replaced and repaired.

The KF-21 will become the Republic of Korea Air Force’s “backbone,” and is due to replace the country’s aging fleet of F-4 and F-5 fighters, as the announcement said. It’s considered a 4.5-generation aircraft, in line with the F-16 jets but less stealthy than Lockheed Martin’s F-35 Lightning II, says Defense News.

The two-seater fighter jet will be able to fly at approximately 1.8 times the speed of sound and carry 7.7 tons of ordnance.

It’ll be able to assist the Air Force with a number of different missions, from dogfights to neutralizing land and sea enemy attacks and carrying out long-range strikes on enemy air defenses.

In keeping with the times of electronic warfare, the KF-21’s “Integrated Electronic Warfare Equipment” works to disrupt enemy radar. The aircraft are also kitted out with an “AESA radar” and an “Infrared Search and Track System” that work to detect enemy aircraft and missiles. Moreover, the jet will easily detect ground targets with its “Electro-Optical Targeting Pod.”

It’s exciting to see countries locally developing and manufacturing such impressive jets, and it’ll be interesting to keep an eye on how South Korea’s KF-21 supersonic fighter jet goes through its upcoming tests.