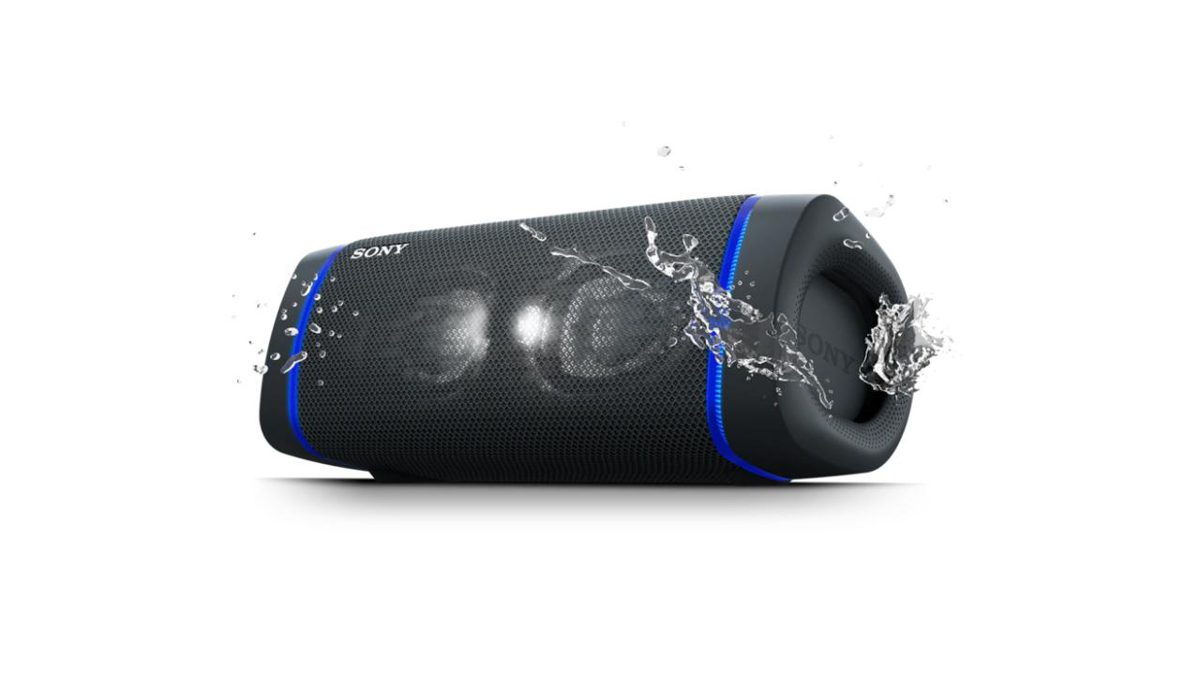 Sony recently updated its SRS series of portable Bluetooth speakers, and the SRS-XB33, at $149.99, is the mid-priced option. While not exactly tiny, the Sony SRS-XB33 is still quite small for the amount of sound it can produce—there’s plenty of bass depth here for the size and price. Thankfully the lows are balanced by sculpted highs, but this is not a speaker for those seeking accurate audio performance. That said, in-app EQ allows for some sound signature tweaking, and built-in LED lights add a fun factor, making the SRS-XB33 a solid outdoor-friendly option for the price.

Measuring 3.8 by 9.7 by 4.2 (HWD) and available in black, blue, red, or taupe, the SRS-XB33 isn’t quite cylindrical—it’s oblong like its less expensive sibling, the Sony SRS-XB23 ($99.99). But unlike that speaker, its front face and top panel are both flat, while the back is rounded. On either end, the Sony SRS-XB33 has a band of LED lights that continually change colors and flash to the beat (they can be controlled or disabled in the app).

Behind the cloth grille, dual full-range drivers, aided by passive bass radiators on both ends of the speaker, deliver a frequency range of 20Hz to 20kHz. The drivers are also lit up by LEDs and resemble glowing eyes from behind the grille. Rubber feet on the bottom panel keep the 2.4-pound speaker stable on flat surfaces.

A rubber strip on the top panel houses the controls, with buttons for power, Bluetooth, play/pause (which also answers/ends phone calls), minus/plus for volume, and Live, which adds an unnecessary spatial effect to the audio. This area is also an NFC pairing zone and houses status LEDs for pairing mode, battery life, and whether Stamina mode is activated, which is a low-power mode that preserves battery life by essentially eliminating bass response. It’s not great for listening to music but it can be helpful when trying to save battery life and using the speaker for calls or podcasts.

A snap-shut cover protects a panel that houses a USB-C port for the charging cable and a USB-A port for charging other devices with the speaker’s battery. There are also buttons here for Party and Stereo Pair modes—both features for linking up with other SRS speakers. You can also turn on battery-saving mode with the Stamina button.

The SRS-XB33’s IP67 rating is excellent for a portable speaker. The 6 indicates a dust-resistant exterior and the 7 means it can withstand splashes, heavy rain, and can be submerged up to a meter for up to 30 minutes. It can therefore also be rinsed off under a faucet, so long as the snap-shut cover for the USB-C charging cable connection is fully closed. Sony also claims the speaker is also saltwater resistant, so you can bring it to the beach without worry.

The Sony Music Center app for Android and iOS opens up various features and control settings. Among the most immediately useful settings—the ability to control the LED light show—there are over a dozen settings to choose from, with names like Chill or Rave, as well as Calm settings that slowly fade between similar colors. Of course, you can also completely disable the lights. The aforementioned Stamina setting can also be accessed here, and there are various EQ presets as well as user-adjustable EQ bands (and a host of sound effects we can recommend leaving off). For the EQ and LED controls alone, the Music Center app is worth downloading.

The SRS-XB33 is compatible with Bluetooth 5.0 and supports AAC and SBC Bluetooth codecs, but not AptX.

Sony estimates battery life to be roughly 24 hours, but your results will vary with your volume levels.

On tracks with intense sub-bass content, like The Knife’s “Silent Shout,” the SRS-XB33 delivers notable low-frequency thump for a speaker this size. At moderate volumes, it really seems to be pumping out some deep lows, while at higher volumes, the bass depth gets thinned out somewhat by the DSP (digital signal processing), but not to an extreme extent. At maxed-out volume levels, there’s no distortion, and still a very healthy sense of bass depth.

See How We Test Speakers

Bill Callahan’s “Drover,” a track with far less deep bass in the mix, gives us a better sense of the SRS-XB33’s general sound signature. The drums on this track can sound overly thunderous on larger, bass-forward systems, but here, they find a nice balance between robust, full bass depth and not overdoing it. Callahan’s baritone vocals are delivered with plenty of added low-mid richness—thankfully, there’s a solid high-mid and high-frequency presence to keep things clear and defined. The acoustic strums and higher-range percussive hits are delivered with plenty of high-frequency presence, as well. Generally speaking, this is a sculpted, scooped sound signature, with lots of rich bass depth and crisp high-frequency contour, but the midrange takes a bit of a vacation. This can be remedied to a degree with the app’s EQ.

On Jay-Z and Kanye West’s “No Church in the Wild,” the kick drum loop receives enough high-mid presence for its attack to retain its punchiness in the mix, while the sub-bass synth hits that punctuate the beat are delivered with a solid amount of bass depth, but nothing approaching what you’d hear on a larger system with subwoofer capabilities. The drum loop does get a little beefed up in the bass department, however, and the vocals are delivered with solid clarity and not much added sibilance.

Orchestral tracks, like the opening scene from John Adams’ The Gospel According to the Other Mary, get more bass presence than purists will want to hear, but it doesn’t throw the entire balance of the mix out of whack. The lower-register instrumentation sounds richer and more powerful, but the highs are still the focus of the mix, bright and clear. Again, this is a scooped sound signature—boosting the mids and cutting the bass slightly in the EQ goes a long way to restoring accuracy. As is, the SRS-XB33 delivers a bass-forward, crisp sound that will still appeal to many listeners without any EQ tweaks.

The mic offers solid intelligibility. Using the Voice Memos app on an iPhone 8, we could clearly understand every word we recorded. There’s still some typical Bluetooth distortion in the mix, but the mic signal is strong and callers on the other end should be able to hear you without issue.

For $150, the Sony SRS-XB33 represents an excellent value, with solid bass depth from a waterproof, fairly compact frame. That the app has user-adjustable EQ only sweetens the deal. Between this model and the $100 SRS-XB23, which we also like, we more strongly suggest this one—the increase in price is not insignificant, but what you get in return (more powerful audio and bass depth) will be worth it to some. We also really like the $180 JBL Charge 4, which can now be regularly found for less than the Sony model. And if you’re willing to spend more, Sony’s SRS-XB43 is the best of the bunch, with the same rugged build and LED lights, but more robust audio performance.