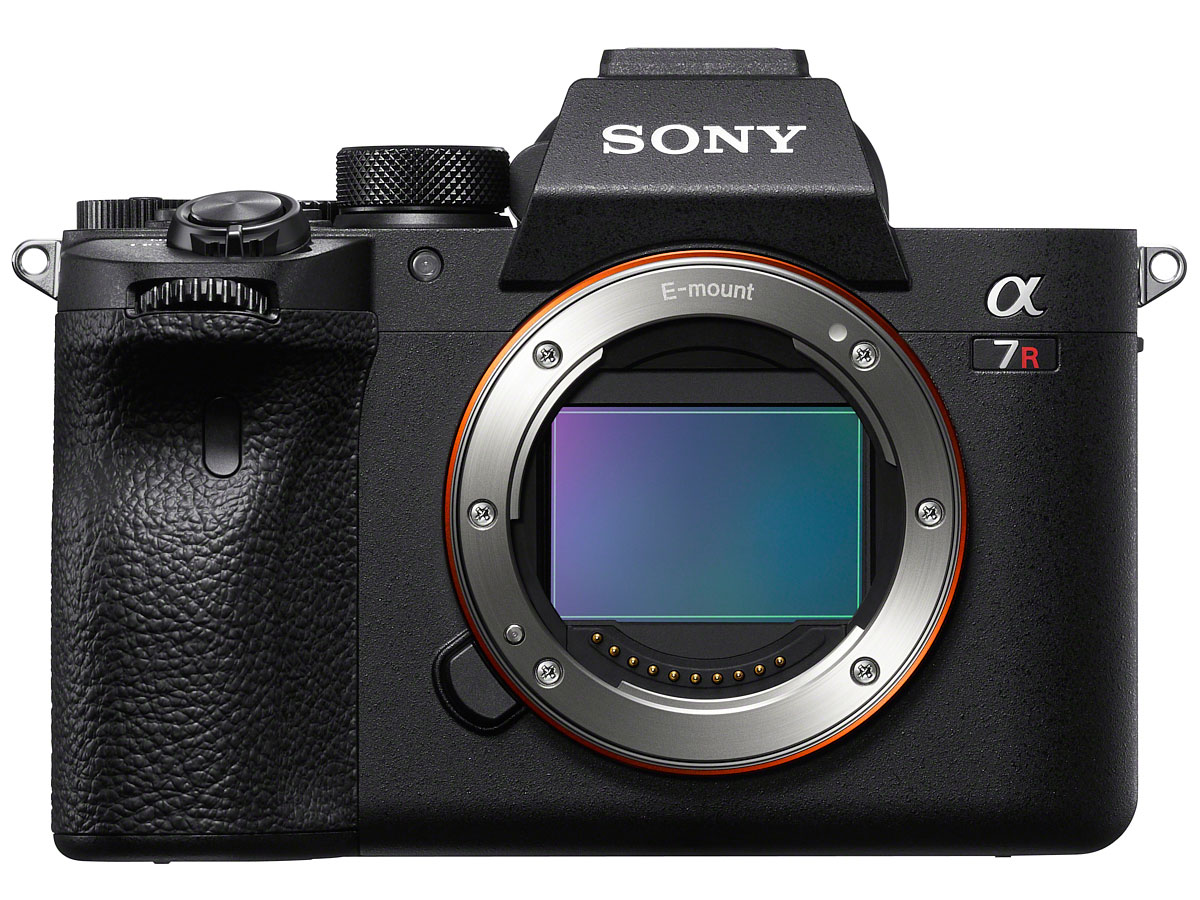 The Sony A7R IV is the successor to the full-frame 42.4MP A7R III and features a newly-developed 61.2MP BSI-CMOS sensor with a native 100-32,000 ISO range (expandable to 50-102,400). Besides the higher pixel count, the A7R IV has an updated hybrid AF system comprising 567 on-sensor phase-detection AF points as well as 425 contrast-detect points, covering 74% of the image frame. It also has human and animal real-time eye (detection) AF, and features continuous shooting at up 10 fps, with full AF/AE tracking for bursts up to 7 seconds.

Although the body shape is familiar, Sony has done some upgrading to the weather-sealing, plus the body itself now features a fuller grip and a larger, reshaped joystick and a larger top-plate control dial and buttons. Inside, it has a high-res 5.76 million-dot OLED viewfinder, dual SD cards with UHS-II support, the latest 802.11ac Wi-Fi, and wireless PC connectivity for tethered control.

Video capture options include 4K recording up to 30 fps from the sensor’s full width, and Full HD at up to 120 fps, both with real-time Eye AF. There’s also a 6K Super 35 (more like APS-C) cropped mode downsampled to 4K.

Click on the score chart above to open the Sony A7R IV product page.

The new Sony A7R IV sensor achieves an overall DXOMARK score of 99, making it one of the best-performing sensors in our database.

A quick look at sub-scores shows that the Sony A7R IV sensor stands out for its dynamic range (Landscape score) and its low-light ISO (Sports) score. The new 61.2MP sensor measures 14.8 EV at base ISO (ISO 100 manufacturer’s setting), which matches that of the best sensors.

Even with an increase in pixel density for a full-frame sensor, the A7R IV still performs exceptionally well in our Low-Light ISO score. With a recorded value of ISO 3344, the new 61.2MP sensor remains on par with the leading high-res full-frame models and makes the Sony A7R IV an exceptionally strong contender in this market.

Sony has selected a 61.2MP BSI-CMOS full-frame sensor for A7R IV over the previous 42.4MP device used in the earlier A7R III and R II models, and the results from the new sensor are remarkably close. Given the technical challenges arising from handling increased noise levels (a direct consequence of using physically smaller photosites required to increase the pixel count by just over 44%), the Sony A7R IV sensor certainly performs well.

As the table shows below, the results put the new Sony A7R IV only a fraction behind the Panasonic Lumix DC-S1R and the Nikon D850, as well as the two cropped (~33 x 44mm) medium-format Pentax 645Z and the more recent Hasselblad X1D-50c.

Even though those models have the slightly better maximum color (Portrait) and noise performance (Sports) scores between them, since the overall performance is so close, it’s necessary to look at the individual measurements to see how the Sony performs so well. 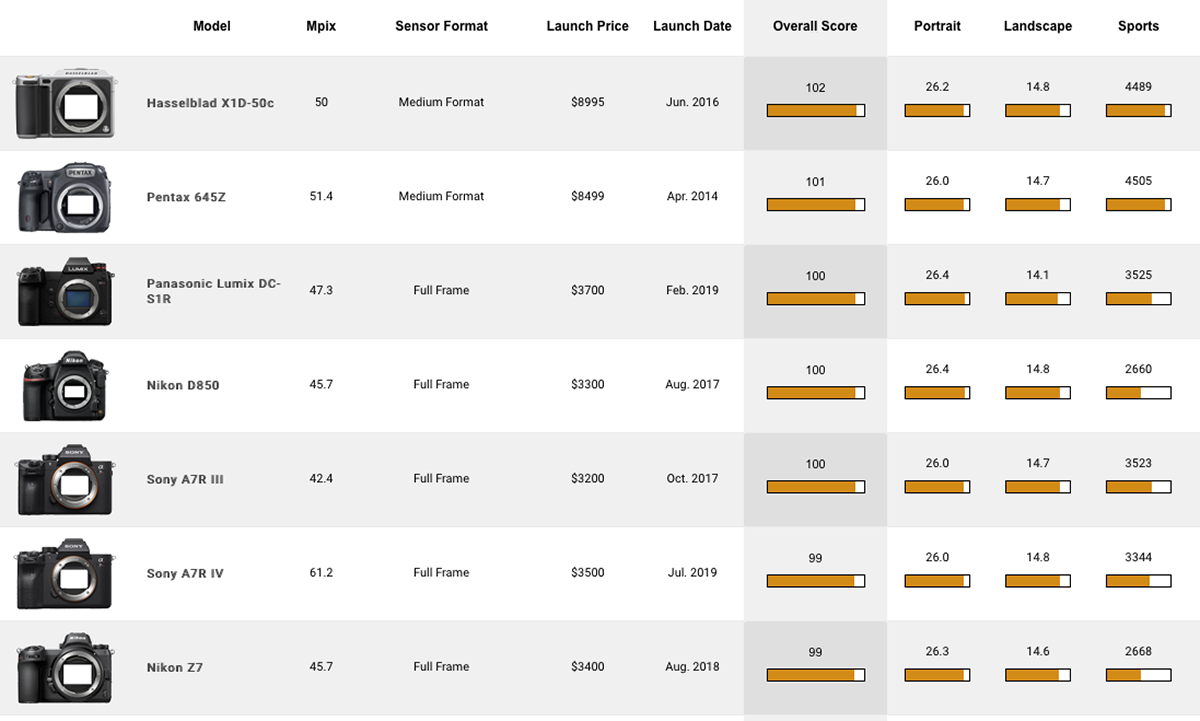 In this section, we’ll take a closer look at how the Sony A7R IV sensor scores in comparison with the Nikon Z 7 and the Panasonic Lumix DC- S1R, its closest mirrorless rivals. You can use our comparison tool to see how it stacks up against other models yourself, however.

Where the ISO sensitivity range overlaps, the Sony A7R IV’s sensor is very close to the Nikon Z 7’s in terms of color depth. However, the lower measured base ISO of the Nikon sensor achieves a slightly better response of 26.3 bits against the Sony’s 26 bits. From a technical viewpoint, this means better color discrimination at base only, but the 0.3-bit difference is unlikely to be noticed. At the other end of the sensitivity range, from the manufacturer’s ISO 25,600 setting onward, the Sony has the upper hand, leading to a 1.7-bit increase at ISO 102,400—which could be noticeable. It is the Panasonic, however, that has the better color response practically throughout its ISO sensitivity range, although again not by a big margin.

All three sensors comfortably pass our good quality benchmark minimum of 20 bits at ISO 1600, and each provides what we would class as acceptable image quality at up to ISO 25,600 before dropping beneath our poor quality threshold of 14 bits.

With nearly 15 stops (14.77 EV) of dynamic range at base (ISO 100), the Sony a7R IV sensor’s response is impressive. If we compare that to the Nikon sensor at base (ISO 64), there’s not only a slight improvement of 0.2 EV in dynamic range for the Sony, but perhaps more importantly, there’s around two-thirds of a stop (~0.67EV) advantage in sensitivity. For the Sony user, this could be beneficial, potentially allowing the selection of either a faster shutter speed or a smaller aperture.

If we compare like for like, where manufacturer ISO settings overlap, the Sony maintains an advantage in dynamic range over the Nikon up to and including ISO 200; but at ISO 400 through ISO 12800, they’re practically identical. Above that, the Sony has a slight uptick from shadow noise reduction applied to RAW files (shown as smoothing on the graphs), which may be noticeable in some cases.

With the Panasonic, the measured dynamic range is a little lower for the most part, especially from base ISO up to ISO 800. The difference here could be noticeable in certain images against the Sony, where some detail in bright areas may be lost, but it’s unlikely to be noticed at ISO 1600 and above.

All three sensors handle noise well, but unsurprisingly, each has slightly different SNR 18% results. While the Sony A7R IV falls mostly in between the slightly better Panasonic figures and the Nikon’s mostly lower measurements, the Sony A7R IV sensor has an advantage at ISO 25,600 and above. At that point it applies some shadow noise reduction to RAW files (shown as smoothing on the graphs), leading to an improved result that could be noticeable, though the two expanded ISO settings of ISO 51,200 and 102,400 are at our “poor quality” threshold of 20 dB. What may be more advantageous is around a one stop (1 EV) advantage in sensitivity at base (ISO 100 manufacturer’s setting) over the Nikon Z 7 (which also applies to the Panasonic). However, it is still worth noting that the Nikon Z7 has the best SNR 18% result of the three, but you’ll have to set the camera to its base ISO setting of ISO 64 to see it.

Despite the challenges posed by the increase in pixel count, Sony’s latest addition to the high-resolution A7R series, the A7R IV, continues to deliver excellent dynamic range, particularly at low ISOs, while also delivering very good color discrimination and control over noise. While the technological advances are impressive, it’s not quite enough to put the sensor’s performance ahead of rival, lower-pixel-count devices overall. However, the increase in pixel count to 61.2MP, making it the highest currently available in 35mm full-frame format, is certainly compelling. When you combine that with the upgraded AF and other refinements, such as its higher-res EVF, robust build, and improved ergonomics, the Sony A7R IV is one of the most—perhaps the most—capable and versatile high-res 35mm full-frame cameras available.

In this review, we have compared the Sony A7R IV to its most relevant rivals from other brands. As usual, you can create your own comparisons and in-depth analyses using our interactive image sensor ranking tool.