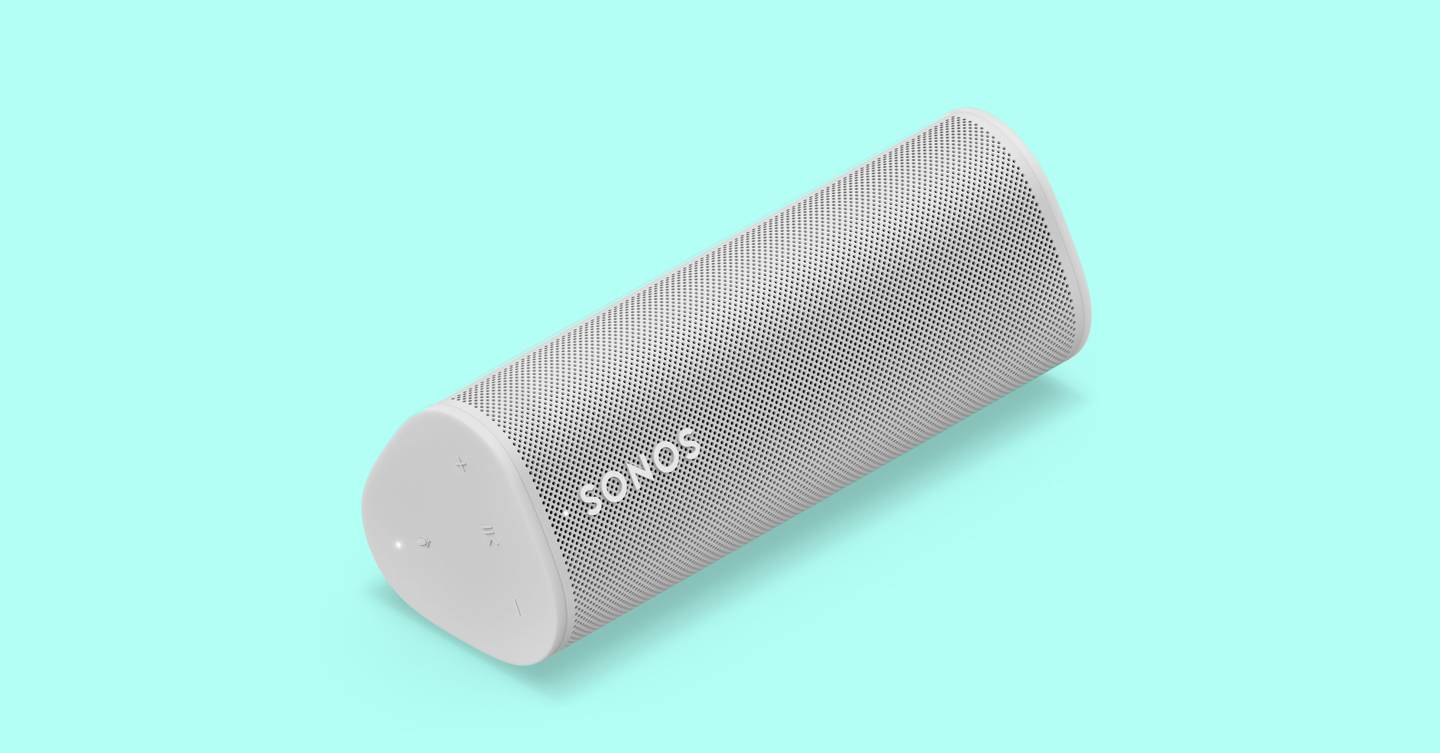 How has it taken until the middle of 2021 for Sonos to deliver a truly portable, decently rugged and battery-powered Bluetooth speaker? Even by the company’s recent ultra-cautious standards, the Roam is overdue.

Presumably the company has been waiting until it was completely satisfied the Roam couldn’t be any better, and presumably it’s been ignoring the sales that the likes of Bose, JBL and Ultimate Ears have been racking up with exactly this sort of product while the Roam has been in development.

Still (as we seem to be saying as a matter of routine at every Sonos launch these days), better late than never. Sonos was hardly first out of the blocks with its Arc Dolby Atmos soundbar or its Move kind-of-portable speaker – but both products turned out to be prodigiously talented alternatives to the market leaders.

So as long as the Roam performs like the full £159-worth (it’s now the least expensive way into the Sonos ecosystem, if you – like everyone else – ignore the Symfonisk collaboration with IKEA), the fact that it should have been on sale years ago will be neither here nor there. Won’t it?

Put the Roam next to the Sonos Move and you’ll immediately understand why the idea of the Move being a ‘portable’ speaker was greeted with some scepticism. This is what a truly portable speaker is meant to be: handily sized (a tidy 168 x 62 x 60mm), decently light (a stripling 430g) and properly durable (its IP67 rating means it’s dust-proof and can survive being in up to a metre of water for up to half an hour). It’s drop-resistant, too. The rubberised end-caps feel especially rugged.

Undoubtedly there’s a word in geometry to describe the Roam’s specific shape, but in the absence of the necessary knowledge we’re going to go with ‘vaguely triangular cylinder’. Certainly the ends of the Roam are rounded-off triangles, and given that there are four little feet along the long ‘bottom’ plane of the speaker it would seem to have been designed to sit with its correctly orientated ‘Sonos’ branding facing the listener.

But it’s also happy to sit upright on one of its rubberised, triangular-ish ends, which puts most of its physical controls at the top rather than at one end of the enclosure.

On the top (or the end – it depends, of course) of the Roam there are controls for ‘mic on/off’, ‘volume up/down’ and ‘play/pause’. This last control doubles, or rather trebles, as the method of adding the Roam to a group of Sonos products or swapping audio between them.

It’s a very worthwhile feature, and one that could be even more useful and convenient if the difference between the length of press-and-hold required to group your speakers or exchange audio between them was a) more than a nanosecond and b) properly reliable.

There’s a power button (which doubles as the ‘Bluetooth pairing’ control) and a USB-C input at the rear of the enclosure. Sonos provides a USB-C cable for charging, but no mains adapter – and the upcoming charging pad will cost you money, too, which seems pretty tight.

The USB-C input is open, which can’t be the wisest idea for a product designed to be slung into a backpack or similar. A little rubber cover on a hinge would be nice – lots of other ‘go anywhere’ wireless speakers include this courtesy.

On the inside, Sonos has fitted a tweeter and a ‘racetrack’ mid/bass driver – each is powered by its own discrete Class H amplifier. As is usual with Sonos, the size and composition of the drivers, as well as the actual amount of power being generated, is an inexplicably closely guarded secret. It’s just specification, Sonos, it’s not the passcode to the corporate bank account.

As it did with the Move, Sonos has fitted the Roam with its Trueplay feature. This uses the Roam’s integrated mic to examine the speaker’s surroundings and automatically tweak EQs accordingly. Naturally enough, you have the ability to deal with EQs yourself in the Sonos S2 control app.

The straightforward brilliance of the Sonos control app is high on the list of reasons the company enjoys such ubiquity, and in its S2 incarnation it remains an admirable device. Apart from some truculence when trying to integrate a voice assistant (the Roam is compatible with both Amazon Alexa and Google Assistant), it’s as simple, stable and straightforward as ever. Which puts it well ahead of almost all its nominal competition.

The inability to integrate the Roam into a Sonos surround-sound system grates, though – a couple of these, along with a Sonos Arc and Sonos Sub, would constitute a simple and pretty formidable cinema system.

The Sonos Roam may be assessing its surroundings and adjusting its sound to suit, but Trueplay seems to think ‘lots of bass’ is the answer in every circumstance. Unless you’re one of those listeners who confuse ‘too much bass’ with ‘excitement’, you’ll be straight into the S2 app to dial down the low frequencies and restore a bit of realism to the sound the Sonos makes.

With bass backed off to a sensible level, the Roam is capable of a pretty even, surprisingly expansive sound. This is a little speaker, let’s not forget, yet it manages to give recordings genuine scale. Eartheater’s remarkable Below the Clavicle sounds bigger and more expansive than the enclosure it’s delivered from – it’s the sort of presentation that can initially be quite startling. The same song allows the Sonos to demonstrate a decent facility with dynamics, too.

Listen a little longer, though, and some fairly fundamental shortcomings are revealed. For all the Roam’s ability to serve up a big sound, it’s hardly the last word in detail or outright clarity. The Eartheater recording is all about the remarkable vocal performance, but the midrange here isn’t all that distinct – and, as a result, a lot of the singer’s character and idiosyncrasy goes astray. The prominent treble attack of the recording is rolled off significantly, too – but while there’s no harm in keeping the top of the frequency range under control, it doesn’t do to undersell it.

Switch to the pummelling Poison Dart by The Bug and, if you let Trueplay run the show, all you get is an absolute stack of low-frequency presence. Back off the bass-happy emphasis in the control app and there’s still plenty of punch – but that lack of fine detail retrieval and incomplete treble frequency presence means the recording ends up sounding quite two-dimensional, and rather bogged down by its own bass.

Most unusually for a Sonos product, the Roam also demonstrates some operational shortcomings. It’s supposed to switch from Bluetooth to wi-fi once it detects a friendly network – which allows the speaker to join in with other Sonos speakers, as well as getting voice-control onto the menu. But (for us, at least) that isn’t always the case.

And when on Wi-Fi, Google Assistant proves far less cognisant than usual: a request for the parent Eartheater album Phoenix: Flames are Dew Upon My Skin is met with a cheery “sure – here’s The Cure on Spotify”. The Sonos Roam is one of the few smart speakers around that can need repeated (and increasingly heated) instructions before it will deliver what you ask for.

Sonos quotes a battery life of ten hours for the Roam. That’s not an especially impressive figure by prevailing standards, and it proves hard to achieve in normal circumstances. Under real-world conditions you’re probably looking at closer to eight hours.

Perhaps most significant, though, is the way the Roam’s performance falls away at lower volumes. In the outdoors, where you may well be enjoying considerable volume levels, all is well (within the parameters described above, anyway). But reduce the volume and performance, as well as output, diminishes – information goes astray at either end of the frequency range and you’re left with quite a narrow, inexpressive presentation.

All of which means the Roam isn’t quite the no-brainer most new Sonos products are. And, unlike most of the company’s recent efforts, it wasn’t especially worth waiting for. You don’t have to look far to do better.

💊 A dying child, a mother’s love and the drug that changed medicine

🎧 Upgrading your headphones on a budget? We tested all of Amazon’s cheapest sets