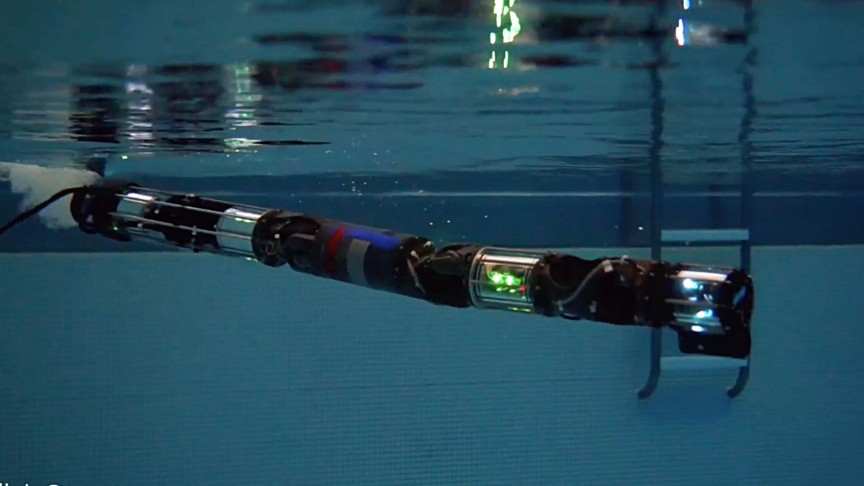 This week, April 13, Carnegie Mellon University (CMU) robotics lab announced it has added swimming to its snake robot’s list of capabilities, “allowing the modular robotics platform to inspect ships, submarines, and infrastructure for damage,” the researchers explained in a press statement.

The Hardened Underwater Modular Robot Snake (HUMRS) is being developed thanks to a grant from the Advanced Robotics for Manufacturing (ARM) Institute.

Work on the snake-like machine began only last July, while testing began last month in one of CMU’s pools after the robot was fitted with a new outer shell that enables underwater operation.

The development follows a recent report by Market Research Future that estimates the burgeoning underwater robotics market will hit the 4.9 million mark by 2025, amidst a slew of new developments in robotics and watercraft that will call for streamlined maintenance.

The CMU researchers say the “secret [to fast R&D on the robot] is the modularity and the people working on this technology at CMU.”

On land, the CMU snake robot is known for its ability to squeeze into very tight spaces, such as oil pipes, that are inaccessible even to similar robot models. At sea, the machine, whose development team includes ex-Navy serviceman Matt Fischer, has great potential for Defense Department usage.

Fischer, who had to crawl into extremely narrow submarine ballast tanks during his service, explained that many sailors would gladly have a robot take over that particular duty.

The new robot is being developed to perform such duties, while also having the capability to inspect submarines and ships while out at sea, sending vital data back to the dock so that any damage repair can be planned accordingly ahead of time.

Potential nonmilitary applications include underwater pipe and oil rig inspections, that would prevent divers from having to get in potentially sticky situations.

Just last month, Eelume Subsea Intervention announced its own snake-like underwater robot specifically designed for pipe inspection. Submergible robotics is coming on in leaps and bounds in recent months and years, as biomimicry boosts the development of small robots that could help monitor our oceans and even prevent people from drowning.