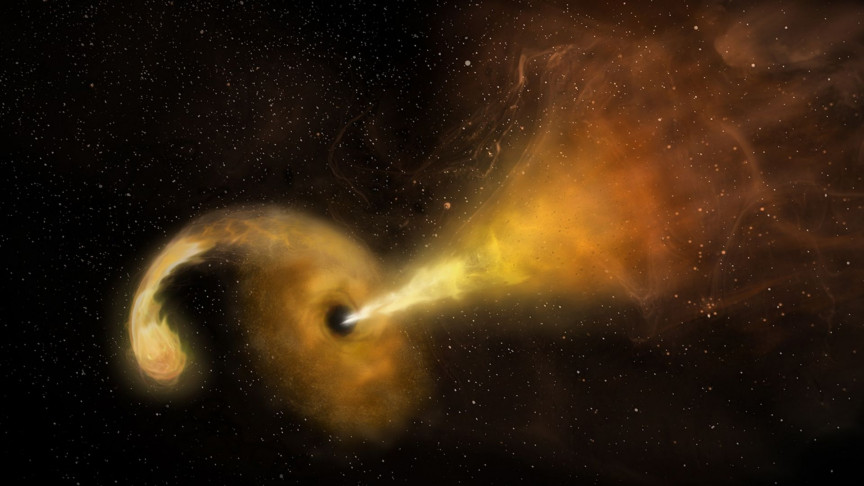 The development of the standard models on the origin of black holes began with Albert Einstein, and his work developing his general theory of relativity—one of the most important discoveries to shape our understanding of physics. In the simplest possible terms, it predicts that there are regions in space with gravitational fields so intense that they warp the fabric of the universe where no matter or radiation can escape.

These regions are called black holes, and the threshold around the black hole where the escape velocity surpasses the speed of light is called the event horizon.

Additionally, it is thought that within the event horizon, is located the black hole’s singularity. Research suggests that this is where the mass of the object that created the black hole has collapsed to an infinitely dense extent. The fabric of space and time around the singularity is theorized to be curved to an infinite degree, so the laws of physics as we know them break down.

However, some researchers believe singularities may actually be impossible, arguing that matter is not capable of collapsing to an infinitely small point. To get around this, some physicists have proposed singularity-free black holes, called “dark stars”. These objects may appear to be black holes, but instead of an infinitely dense core, dark stars contain a core of matter compressed to the tiniest possible scale, what is known as a “Planck core” (named for the incredibly tiny Planck length, a unit of measurement which is 10^-35 meters, around 100 trillion times smaller than a proton).

Researcher Joe Wolfe, at the University of New South Wales expands, “To give you an idea, let’s compare it with the size of an atom, which is already about 100,000 times smaller than anything you can see with your unaided eye (an atom size is about 0.000,000,000,1 meters). Suppose that you measured the diameter of an atom in Planck lengths and that you counted off one Planck length per second. To measure the atomic diameter in Planck lengths would take you 10,000,000 times the current age of the universe.”

Needless to say, the Planck length is extremely tiny, but not infinitely so. Therefore, these “dark stars” may not have a singularity, therefore it’s possible that tiny particles—such as light—can escape its gravitational pull. In doing so, the light would stretch in a quantifiable way: we would be able to observe its redshift (when the light’s wavelength shifts to a reddish color).

Now, a new research paper has shed more light on our understanding of how dark stars would operate.

By removing the singularity from the equation, we get a “black hole” or “dark star” with exotic principles. It just so happens that some physicists believe dark stars can emit a form of exotic matter, perhaps a new massless particle we’ve yet to discover, or they could potentially account for the mysterious dark matter—which accounts for over 85% of the mass in our universe, yet doesn’t interact with light, therefore its origin and purpose remain a mystery physicists are dying to solve.

Physicists discovered the existence of dark matter when they observed the rotation of stars around galaxies was far too fast for the amount of matter they could observe. However, while there is plenty of evidence it exists, it is one of the biggest quandaries in physics.

Physicists have proposed a couple of scenarios for the origin of dark matter. Interestingly, one hypothesis suggests that dark matter may be comprised of known particles, “placed in an unusual condition.” Dark matter could conceivably be composed of particles such as photons that have been redshifted to a wavelength that is too large for modern technology to detect.

In a paper recently published in arXiv by German physicist Igor Nikitin, of the Fraunhofer Institute For Scientific Algorithms and Computing, Nikitin says, “It is an extremely large wavelength, about 4 light days, 16 times the Sun-Pluto distance.” Although the energy of these photons would be extremely small, the particles could be abundant enough to explain why stars sometimes orbit their galaxies in such an unusual manner.

Nikitin believes that this may also explain the mystery of fast radio bursts (FRB). Scientists have detected hundreds of these bursts of radio energy, which pulse in anywhere from a fraction of a millisecond to a few milliseconds, and release as much more energy as the Sun does in three days in a millisecond. There are many theories about the origin of FRBs. Some theories suggest they are generated when black holes collide, or when highly magnetized neutron stars are spinning rapidly. Some even blame them on aliens.

If an object such as an asteroid fell into a Planck core, Nitkin argues, “a burst of high-energy light waves could be released. The dark star’s powerful gravity would redshift the light, creating an apparent FRB detectable on Earth.”

Interestingly, scientists have discovered one fast radio burst that repeats consistently. Called FRB 180916, it appears to pulse precisely every 16.35 days. Located approximately 500 million light-years from Earth, one of the leading theories suggest that it might be a magnetar that’s wobbling on its axis.

“Studies demonstrate that such a magnetar can become deformed by its internal magnetic field, causing it to wobble as it rotates, precessing around its rotational axis. As this hyperactive star releases magnetic flares, we then see those bursts only periodically as the precession of the star brings them into and out of our view.”

The team who is developing the dark star theory have another explanation for fast radio bursts: If an object was consumed by the dark star, it would cause a powerful burst of light and energy—the light would then be redshifted and it would appear as a fast radio burst once the light, which traveled over 500 million light-years to get to Earth—finally arrived.