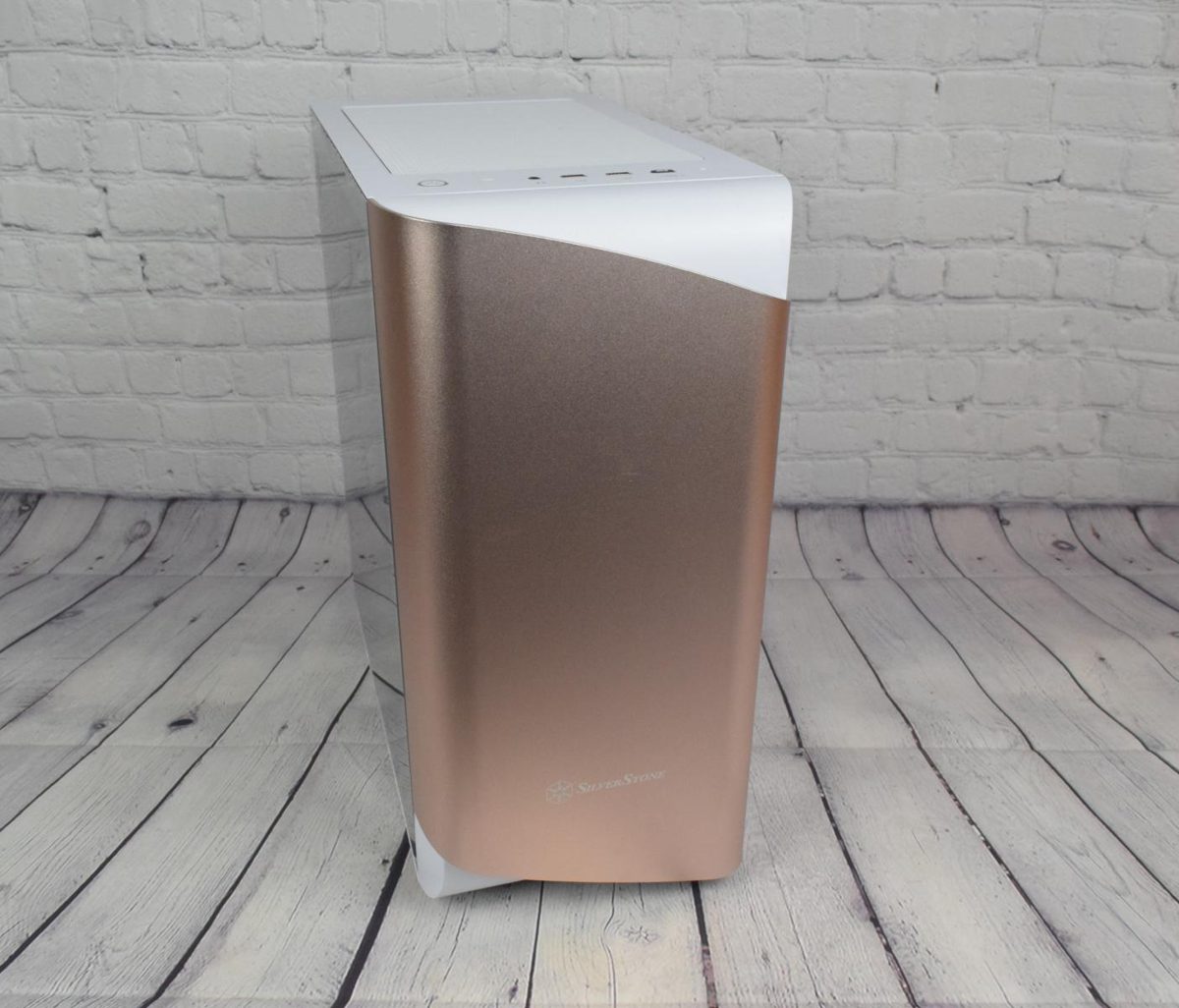 The market for midtower PC cases is a highly competitive place with products from at least a dozen key companies, so it’s a bit surprising how uniform your color choices are. The vast majority of the cases you can buy are white, black, or some shade of silver or gray. SilverStone’s new Seta A1 chassis ($134.99) breaks away from the norm with a contrasting aluminum front bezel offered in silver on black, titanium on black, or our review unit’s instantly eye-catching rose gold on white. Alas, that bit of bling is the main attraction of what’s otherwise a fairly ordinary case that seems pricey for what it is.

In our review sample, the true frame of the case is entirely white, with a tempered-glass window on the left side. But the front panel plate is what really stands out, particularly since it’s backlit by ARGB LEDs. The panel hides a fair bit of the light emitted from these LEDs, but you can still see the lights flashing from behind the plate at the top and bottom of the case. 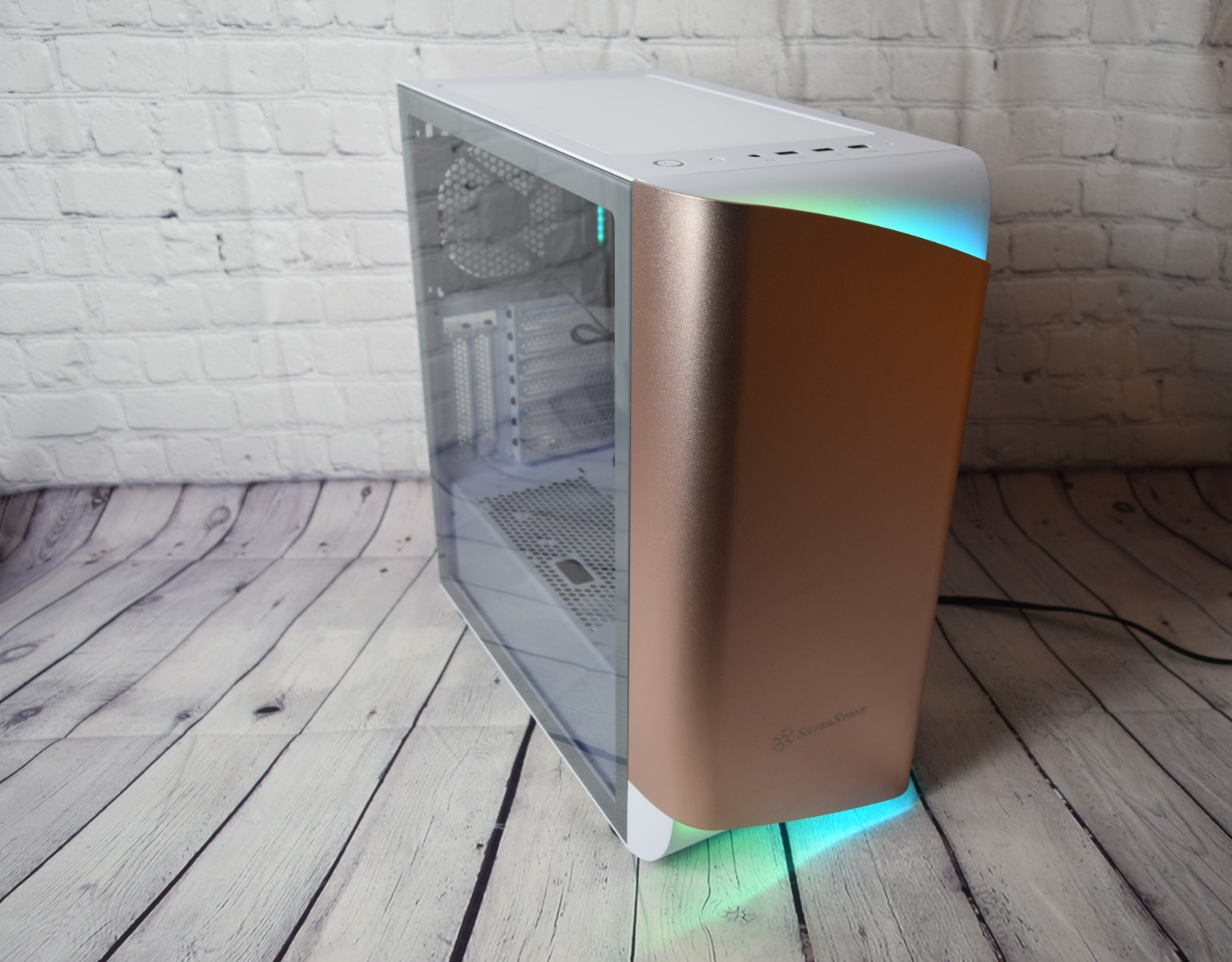 If your motherboard supports a 5050-style LED header, you can connect these lights directly to the motherboard to gain control over the lights and set them to whatever lighting pattern and color you desire. They’re a bit dim when placed under a bright light; with light boxes lit up on the front of the case, I wasn’t able to see the light coming from the top of the case at all, and just a little coming from the bottom. I don’t expect this to be a major problem for most users, however, as the lights showed up fairly well with just my ceiling light on. 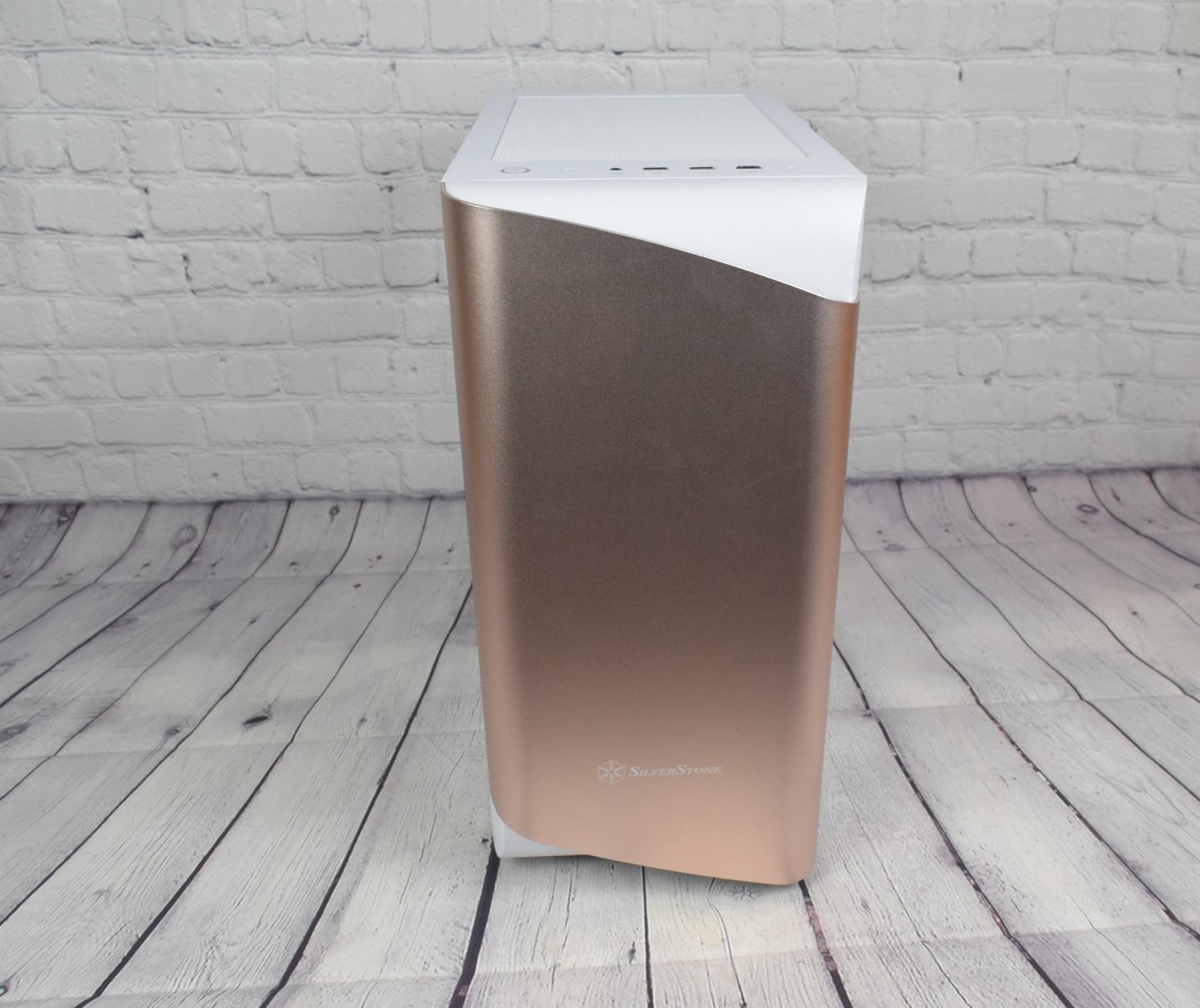 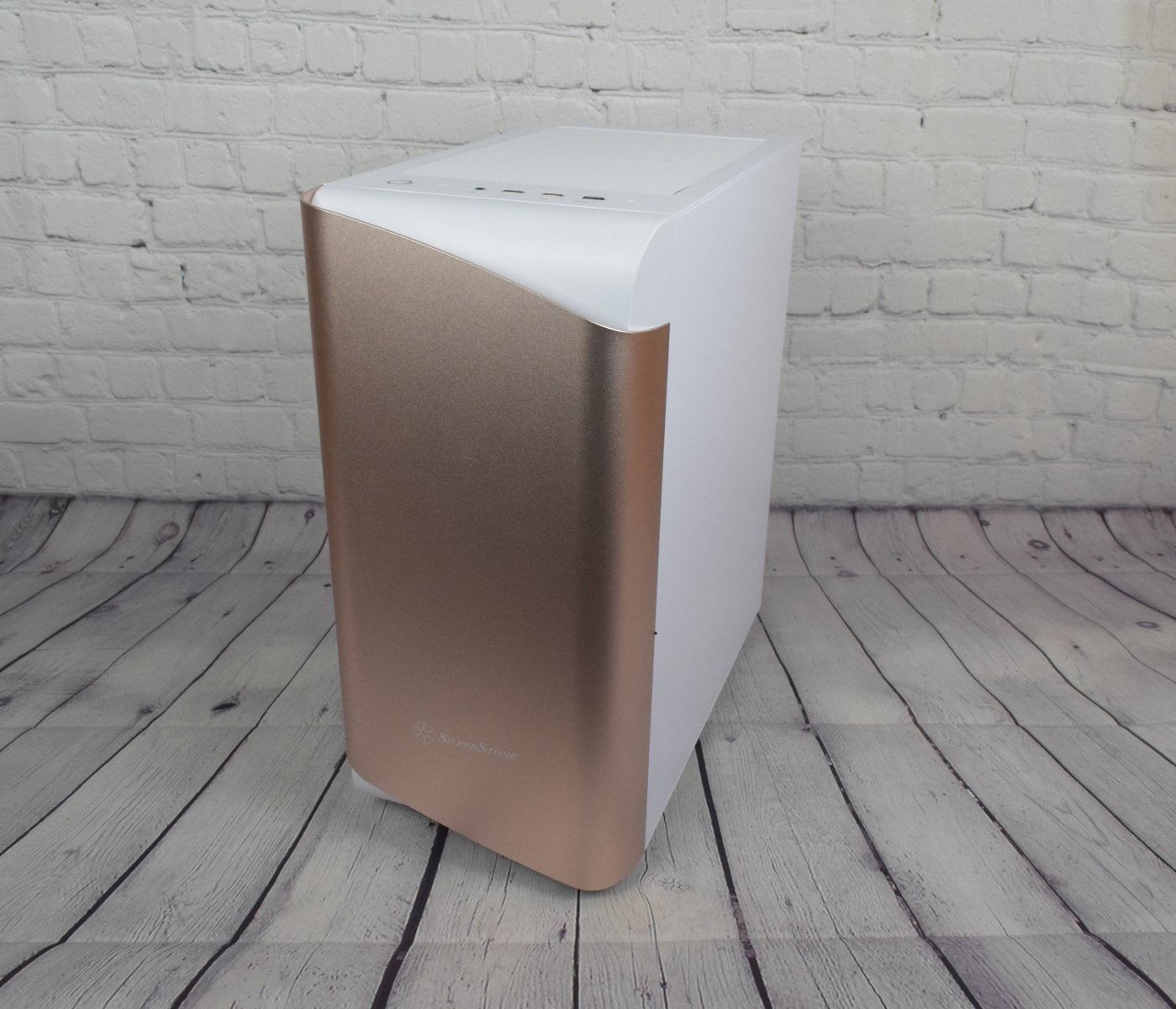 Other than the decorative front panel, the rest of the Seta A1’s exterior is fairly nondescript. The top is heavily perforated to allow air in/out of the case easily, and the case comes with a magnetic dust cover preinstalled over the holes. The bottom of the case is essentially the same, with even more ventilation holes along with another dust cover underneath the rose gold panel. The right panel is simply plain white, with no markings.

The ATX interior will hold a full-size motherboard with little space to spare on three sides. The chassis has six PCI Express slot positions, plus two vertical ones for optional upright video-card mounting, if you want to go that route. No PCIe riser cable or hardware is provided for actually doing the vertical mounting, however. That’s your job to source. 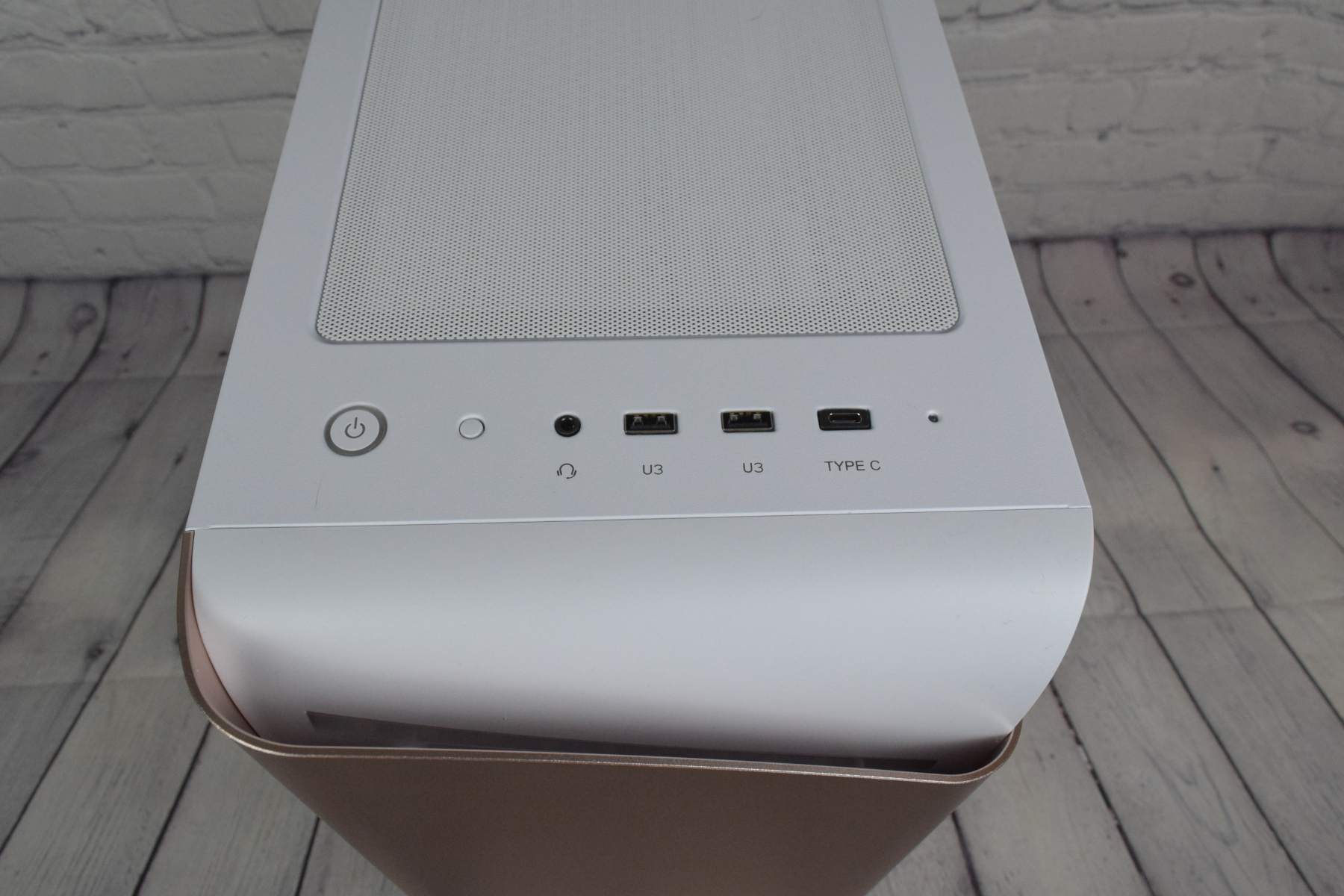 The “front” I/O panel is actually located on the top of the Seta A1 and includes a pair of USB 3.0 Type-A ports, along with a USB-C port and a headphone jack. There are also the usual power and reset buttons here.

For an ATX case, the Seta A1 feels a little on the small side, but it’s not altogether difficult to work in. As with many modern cases, SilverStone set the storage mounts for this case somewhere else instead of beside the motherboard mounting area. This gives you a ton of room horizontally to fit the motherboard in. There isn’t quite as much space vertically, but there’s still plenty for the most part. 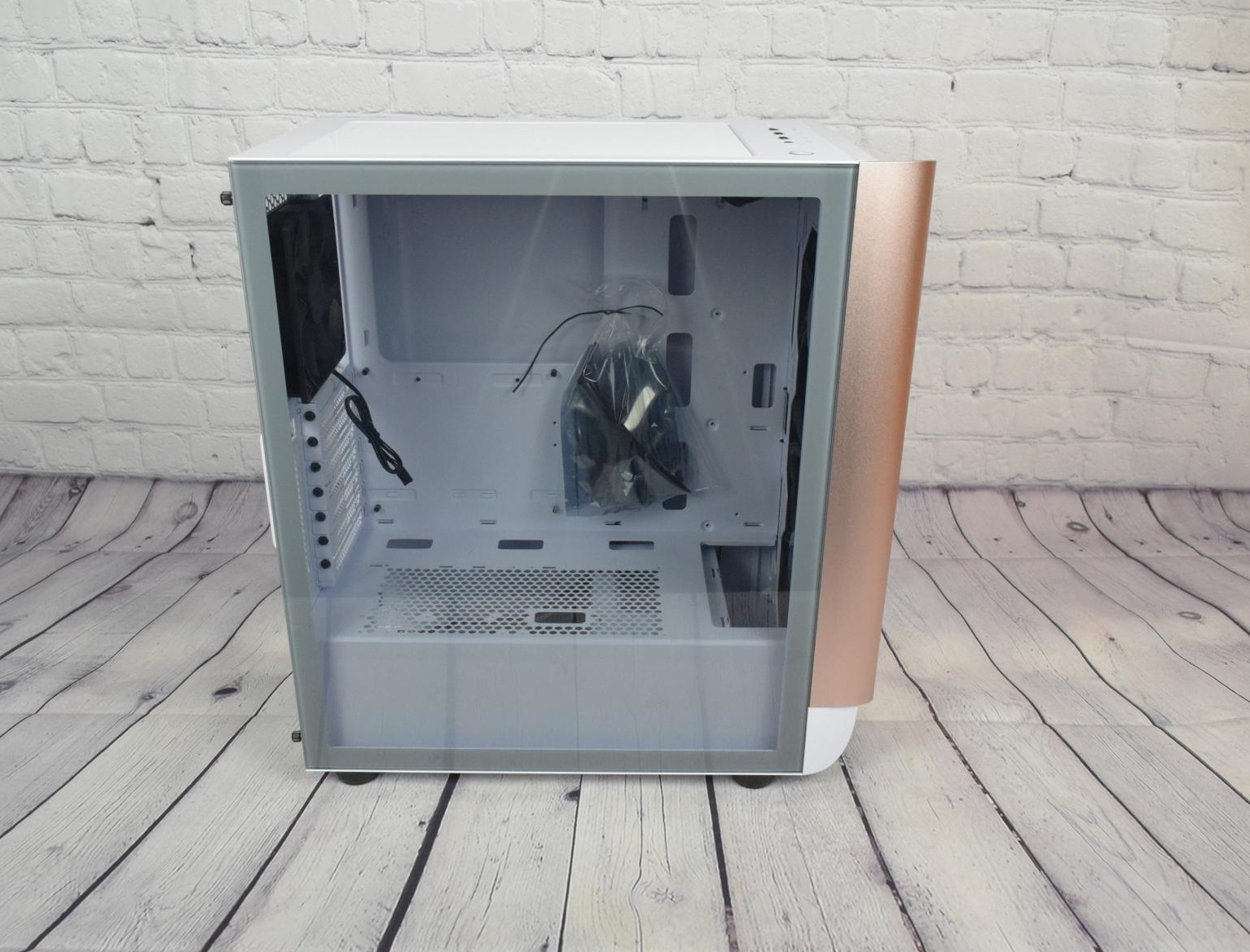 I used a stock AMD cooler on this build, which prevented me from encountering any real problems in terms of space. If you are going to use a water cooler, however, you will want to make sure you plug in the CPU power cable and install the system’s RAM before installing the cooler, as any radiator mounted at the top of this case will restrict access to the top of the board. 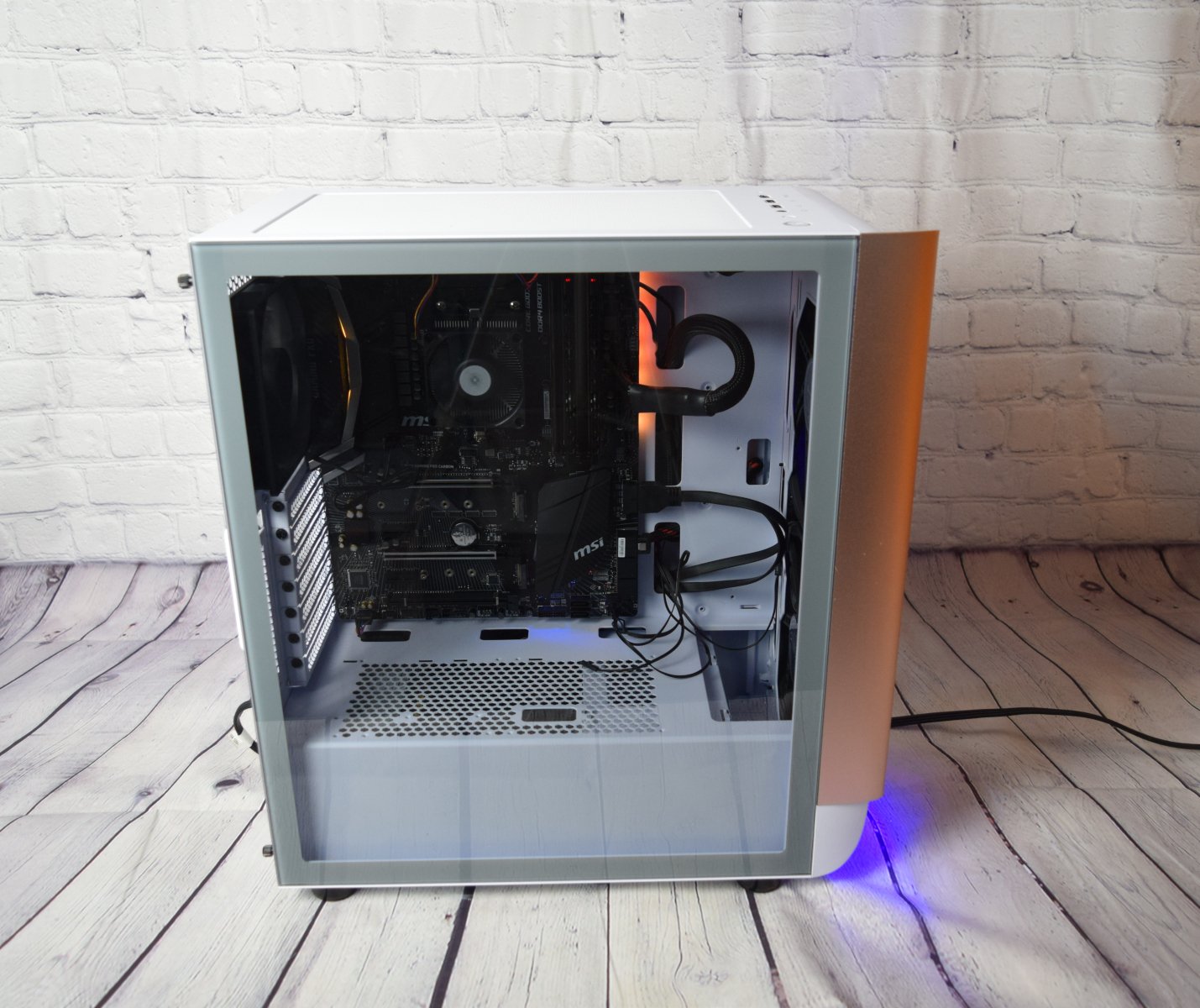 The case can hold up to four 2.5-inch and two 3.5-inch drives, most of which fit into a cage that resides at the bottom of the case. This cage is the only place you can mount 3.5-inch drives in the Seta A1, but there is also room above each 3.5-inch drive bay to slide in a 2.5-inch drive. This cage can also be removed if you need room for an extra-large power supply, leaving two 2.5-inch drive mounts that rest on the back of the motherboard mounting tray. 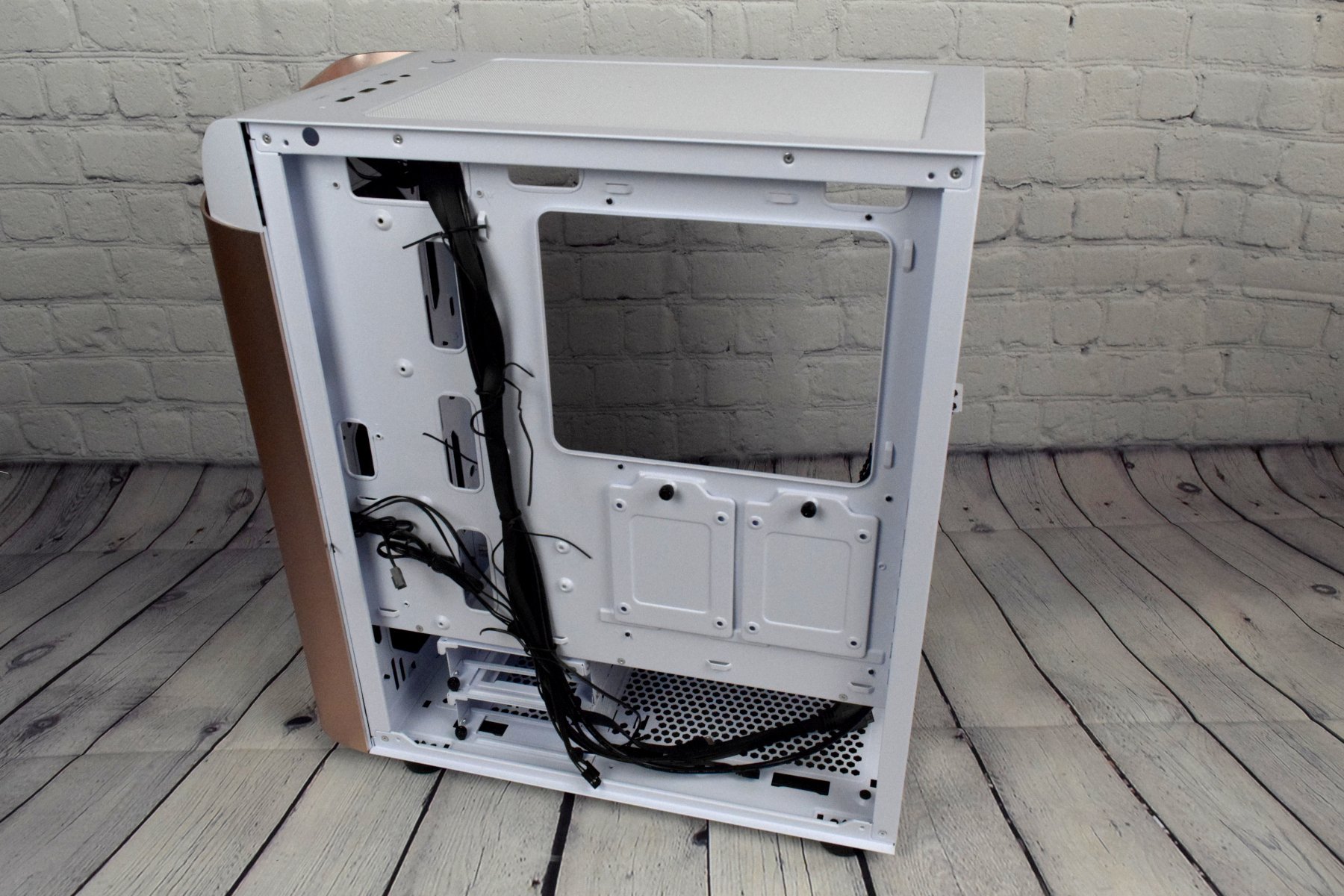 None of these storage mounting locations is toolless, and you will want to screw in your storage devices to keep them securely attached to the case. Other than that, though, the storage options on this case are fairly standard today for a case of its dimensions. The Seta A1 may not use a convenient toolless mounting system, but what is here is no worse than what I’ve seen on dozens of other cases.

Beside the hard drive cage in the bottom right-hand corner of the case is space to mount a power supply, under a grilled shroud. This location is another common feature of many modern cases, but how well it works varies from one case to another. First, let’s just say up front that this mounting location is not ideal if you tend to tinker with cabling. It keeps the PSU hidden out of the way, but accessing it in this confined space to swap out modular cables is a nightmare. It can also be quite difficult to mount a PSU in this spot at times, and the SilverStone is one of these cases. Long story short, it was tough to get the screw holes on the PSU to line up with the ones on the back of the case. 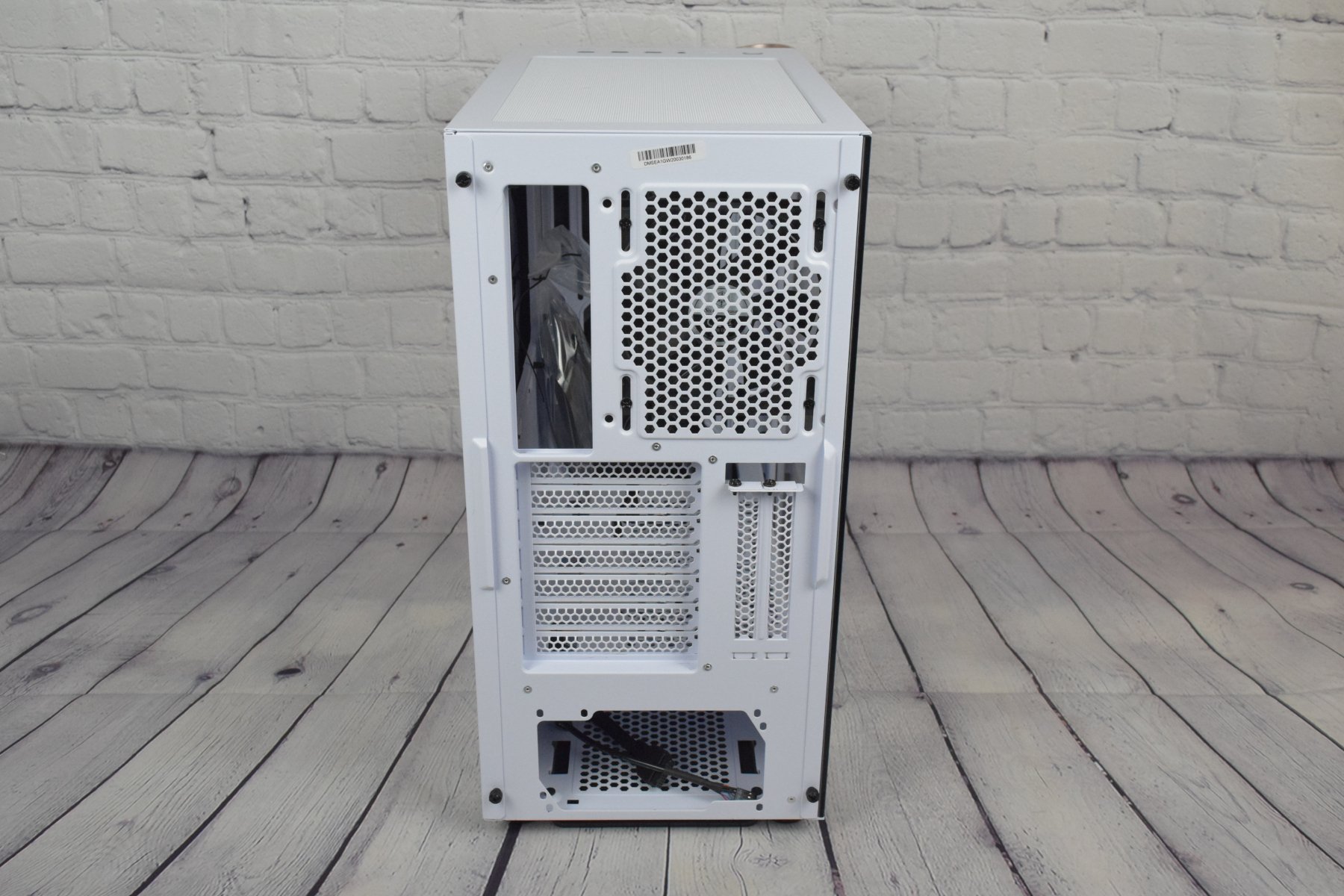 If you opt to use a water cooler, there’s room at the top and front of the case to mount radiators up to 280mm in size. The front actually has a bit more space and can hold a 360mm radiator, but the case comes with two large 200mm fans preinstalled here, so it’s best to leave these where they are if you can. A third fan, this one 120mm, is installed at the rear of the case to exhaust air out the back. These fans are fairly quiet and should provide plenty of airflow for an average system. 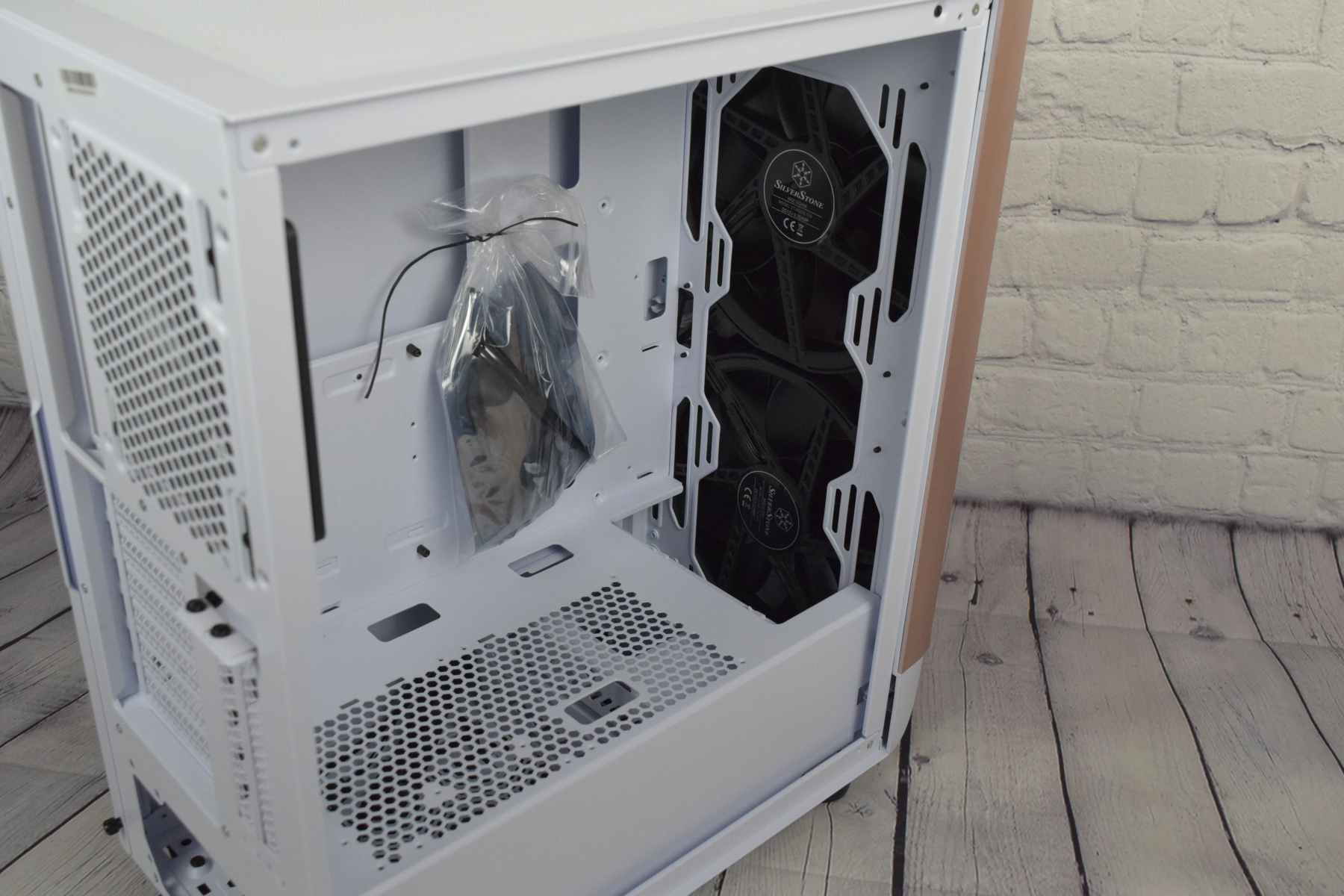 The Price of Gold Needs to Fall

Overall, the Seta A1 chassis is designed reasonably well and it’s not a labor to work in—not great, perhaps, and I’ve certainly seen better, but, all in all, neither bad nor problematic. But what is problematic is that $134.99 list price (which, at this writing, was hiked up to $166.49 on Amazon for the titanium/black variant). This is high for the feature set, and it’s enough for me to say that you should consider other options before investing in a Seta A1 case, at least until it sees some price reductions.

I’d argue that Deepcool’s GamerStorm Macube 310P WH and Be Quiet’s Pure Base 500 are both better cases for the money. They are certainly better priced than the Seta A1, selling for $79.99 and $84.99, respectively. On the flip side, for slightly more than the Seta A1, you could get Thermaltake’s Level 20 RS ARGB for $149.99, which arguably isn’t as pretty, but in terms of features and building experience is way ahead of the Seta A1.

The Seta A1 is simply fighting above its weight class. I honestly wouldn’t expect a case like this to cost more than about $90, and I would even think that a tad pricey, if not outlandishly so. Still, there is something to be said for the rose gold and white model. There are so few gold cases on the market that it holds a certain charm. You can find decidedly more economical options, but if you really want a rose gold case, or if you’re planning to build a system for someone with tastes that sheer away from the typical black and white, the Seta A1 stands apart.