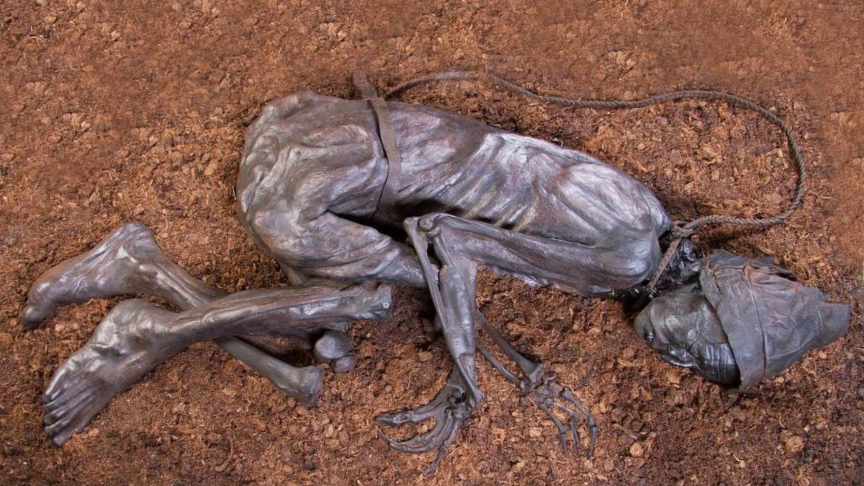 Archaeological remains provide great insights into the past and help us visualize how the Earth was when dinosaurs roamed freely or times even before that. We are also interested in understanding how our ancestors lived and who our close relatives were. To glimpse into our past, there are few remains that are as well preserved as the Tollund Man and a recently published study tells us more about the last meal he ate.

On May 6, 1950, while digging peat in Bjældskovdal near Silkeborg, Denmark, the diggers found a body of a man buried eight feet (two and a half meters) below the ground. They notified the local police, who, after preliminary analysis, transferred the remains to the Silkeborg Museum. After the scientific study, the Museum declared that the well-preserved body was actually over 2,400 years old and the legend of the Tollund Man was born. Housed in the Silkeborg Manor ever since, the accidentally found remains have attracted thousands of visitors from around the globe.

Since the remains were found, scientists have been trying to answer questions about the man himself and what life was during his time, the Early Iron Age in Denmark. After years of study, scientists have agreed that the Tollund Man was hanged to his death and then placed in a bog as part of a ritual aimed to please the gods. Unlike the British style hanging, which breaks the cervical vertebrae and suffocates a person to death, the Tollund Man was suffocated with a rope but his cervical vertebrae remain intact. Experts also believe that he was gently laid to rest in the bog after his eyes and mouth were closed.

When the remains were found in 1950, contents from his stomach, small and large intestines were carefully removed and stored separately. An analysis conducted back then showed that the man ate porridge made up of barley and flax which contained seeds of wild plants pale persicaria and gold-of-pleasure, as his last meal.

In the recent study, researchers at the Silkeborg Museum along with those at The National Museum and Aarhus University in Denmark have reanalyzed these contents using modern technologies.

The researchers found that while barley and flax were used, the seeds of wild plant pale persicaria were also deliberately mixed and were not accidental since threshing and cleaning of grains was in practice at that time. The researchers suggest that this deliberate addition could have been part of the ‘sacrifice’ ritual or even added to improve the nutritional value of the meal.

Comparing the energy value of the meal to modern-day foods, the researchers arrived at the conclusion that the meal was not frugal and there is no evidence of a food shortage. The major ingredients, barley, and flax are cultivated in separate seasons which suggests that the yields were good leading up to the event.

By analyzing cholesterol content, the researchers also concluded that a fatty fish was also part of the meal. Charred contents in the stomach suggest that the meal was cooked in a clay pot but did not contain any ‘intoxicating’ ingredient.

Additionally, the researchers found the Tollund Man to be infected with three different parasites, whipworm, mawworm, and tapeworm. This is the first occasion where a tapeworm infection has been reported in a bog body and suggests that Tollund Man likely consumed raw or undercooked meat prior to this death.

Apart from the Tollund Man, there are over 100 bog bodies that have been discovered but only 12 that are as well preserved, CNBC reported.