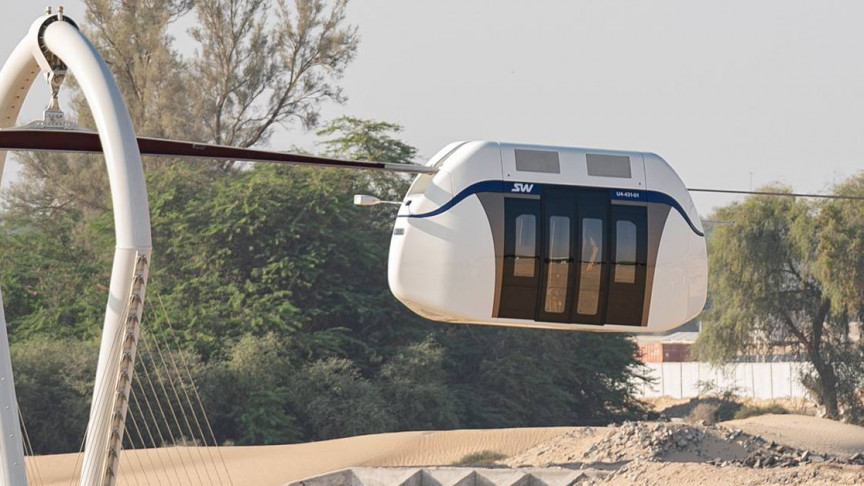 The UAE’s first high-speed electric sky pod network has arrived in Sharjah and it is a sight to behold. The 1.24 miles (2 km) suspended track at the Sharjah Research, Technology and Innovation Park is being built by Unitsky String Technologies of Belarus and it is estimated that the sky pod could be carrying its first passengers within weeks.

The pods come with many advantages. They are cost-efficient as building them is cheaper than laying new roads and they require much less maintenance.

And since the pods are aerial, the surrounding land can also be used for green open spaces or the development of retail and residential real estate. “We don’t need to build roads or demolish houses like when developing other infrastructure, so we can bring this transport system very close to people’s homes,” said in a statement Oleg Zaretskiy, SkyWay Green Tech’s chief executive.

“From a distance, it may look like a cable car – but it is light-years away,” he added. Zaretskiy explained that the new pods are actually energy-saving.

“Ropes and rolling wheels restrict that format to low speeds because of friction and load. This Unitsky String Technology is more like a railroad, with wheels rolling on a rail. There is steel-to-steel friction so it means it consumes much less energy than cars. It is a power-saving solution, with an electrical motor that can be operated partly by solar or wind energy.”

Unitsky String Technologies is seeking to build even more pods. A 1.24 miles (2 km) test track is due to open in May and an 81 mile (130 km) sky track from Sharjah to Khor Fakkan port could be operational to transport freight within three years.

The new type of rail is also built to be very durable, it’s expected to last for over 100 years.

The pods can carry up to 14 passengers at speeds of 93 mph (150 km/h) while larger carriages can carry up to 48 or 75 passengers at 310 mph (500 km/h). It is estimated that if a pod track was built between Abu Dhabi and Dubai, the ride would last less than 20 minutes. Who wouldn’t want to take a ride on these electric sky pods?