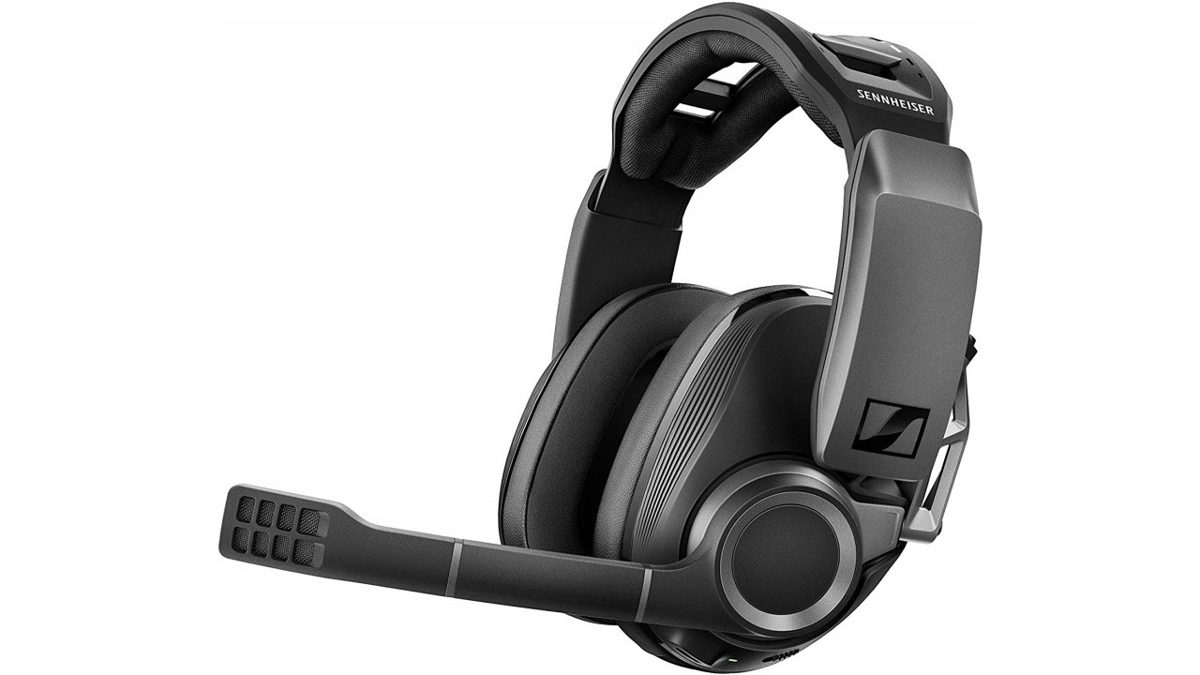 Sennheiser has proven that it’s very capable of making headphones, but it isn’t quite as established when it comes to gaming headsets. We like the $200 GSP 370, which shows the company can offer quality audio in a wireless, gamer-friendly package with a capable boom mic. The GSP 670 is Sennheiser’s top-of-the-line gaming headset, with a $319 price and a beefier build than the GSP 370. It also offers Bluetooth connectivity, so you can use it with your phone as well as your PC and PlayStation 4. The GSP 670 sounds excellent and feels comfortable, if you can get past the steep price.

The GSP 670 is distinctly larger and bulkier than the GSP 370, building on that headset’s design with a more rugged, sci-fi military aesthetic. Large gray earcups attach to the headband with skeletal metal arms that provide some pivot and flex thanks to two hinges. The oval earpads are big and filled with soft memory foam, wrapped along the sides with faux leather and across the top with a softer, suede-like material. The underside of the headband is more lightly padded and covered with a mesh fabric.

Two plastic sliders across the top of the headband let you adjust how the headset sits on your scalp by distributing the weight more toward the sides or the center. While the GSP 670 seems bulky at first, the generous ear padding and clever weight sliders ensure a comfortable fit that lets you wear the headset for long gaming and listening sessions.

The back of each earcup is dominated by some form of plastic circle; the left cup has a smooth plastic circle on which the large, chunky boom microphone is mounted to easily flip up and down, while the right cup has a ridged circle that serves as a combination power switch and volume dial. Turning the dial slightly from its leftmost position powers on the headset, after which you can keep turning it to increase the volume. It’s much stiffer than the GSP 370’s volume dial, and offers little feedback as to whether you’re about to turn the headset off, or just turn the volume down.

The GSP 670 can work through three different types of connections. The included wireless USB dongle lets you listen and talk through your PC or PlayStation 4. You can also connect the headset directly to either device with the included USB-to-micro-USB cable (which is fine for PCs, but might be a bit short to reach your PS4 from the couch). Finally, you can use Bluetooth to connect the headset to your phone or any other Bluetooth device. The headset doesn’t have a 3.5mm connection option.

The headset comes with the aforementioned USB dongle and a charging cable, but that’s it. No case or stand is included. Like the GSP 370, the GSP 670 has no place to store the tiny dongle when it’s not in use.

The boom microphone is sensitive, and more than capable of cleanly capturing your voice. After a few tweaks to the settings, test recordings sounded clear and crisp, with no noticeable sibilance. The noise-canceling microphone also successfully blocked out minor background chatter in PC Labs during recordings.

If your voice sounds off at first, check the Sennheiser app’s microphone functions; it defaulted to a Warm Voice Enhancer setting that made test recordings sound a bit compressed, but disabling the feature fixed the problem. With some experimentation, it’s a quality microphone for streaming and recording, though if you’re really serious about capturing your voice you might want to consider getting a dedicated USB microphone.

The GSP 670 is quite capable at playing music, which is unsurprising considering its Sennheiser pedigree. The bass drum hits in our bass test track, The Knife’s “Silent Shout,” come through with palpable force that doesn’t quite reach head-rattling subwoofer levels, but still makes itself known in the lower frequencies. The bass sounds particularly powerful if you set the EQ to the highs- and lows-sculpted Music preset in the Sennheiser app, and turn up the Reverberation setting. Even at these settings and maximum volume levels, the bass doesn’t distort.

Yes’ “Roundabout” sounds excellent on the GSP 670. The opening acoustic guitar plucks have plenty of string texture thanks to strong high-frequency finesse, and when the electric bass kicks in it sounds punchy and forceful without overwhelming the rest of the busy mix. The guitar strums, vocals, and drums come through clearly, with every element getting attention.

The Crystal Method’s “Born Too Slow” also shines on the headset. The screeching vocals and guitar riffs stand in the forefront, but the drums bring out the bass power to balance the track. Every element of the driving backbeat gets plenty of presence across the lows and mids, making sure no element is neglected.

The roar of engines in Forza Horizon 4 comes through with plenty of power on the GSP 670. The whine of supercars and the growl of off-road vehicles sound forceful, with strong presence in the mids and highs to make each engine distinctive. Smashing into obstacles and splashing in water sounds thunderous, while the plastic clatter of Lego pieces in the Lego Speed Champions map are full of fine, clacky texture.

Gears 5 sounds powerful on the GSP 670. The different weapons pack plenty of thunder, particularly the shotguns and heavy assault rifles. The sounds of combat are punchy, with strong low-frequency response to drive the action. Higher frequencies get enough attention that I could clearly hear the skittering of Pouncers as they approached me. The simulated surround sound of the headset doesn’t provide particularly strong directional imaging, but it still produces plenty of detail and solid stereo panning to get a sense of who’s fighting where.

The Sennheiser GSP 670 is an excellent wireless gaming headset that works with your PC, PlayStation 4, and smartphone thanks to Bluetooth support. It’s flexible and functional, though the heavy-duty gaming aesthetic might put you off from using it in public. It’s pricey for a headset without a dock or even a compartment for its USB dongle, but the build quality and audio performance justify the price.

For full-featured, powerful wireless sound, we’re also fans of the Steelseries Arctis Pro Wireless, which is $10 more than the GSP 670 but features a base station with plenty of onboard controls and two swappable batteries, as well as 3.5mm and Bluetooth connectivity. For less expensive wireless audio, the $150 Turtle Beach Elite Atlas Aero is a strong performer for less than half the price of the GSP 670, while the Razer Nari Essential is a very capable budget option at just $100.

Bottom Line: Sennheiser’s GSP 670 wireless gaming headset feels comfortable, sounds terrific, and features Bluetooth so you can use it with your phone.