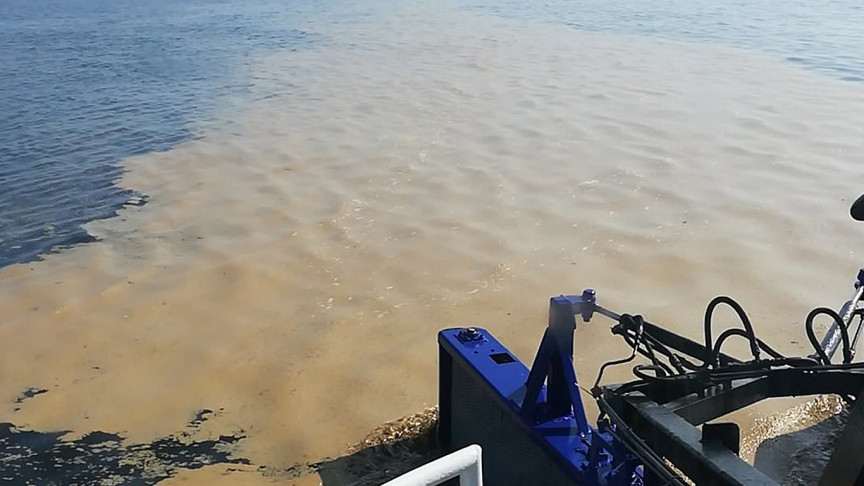 A potential environmental disaster is unfolding on the shores of Turkey as a thick layer of viscous fluid that has been spreading across the Sea of Marmara for months has now started endangering marine ecology.

If you decided to take a walk across İstanbul’s shoreline, which is the longest strip of land that views the Sea of Marmara, a pungent smell and a nasty view of mucilage covering the once-blue sea would accompany you on every step.

The problem, which has been prevalent for months, can be seen on the surface off the coastlines of many other cities in Turkey, and it’s also visible in deep waters, according to reports by divers, suggesting the sea is experiencing the largest invasion of sea snot in its history.

When the problem first emerged in late December, it was only the fishermen that were affected since they couldn’t cast their nets. Now, the situation has exacerbated, with fish dying on the southern banks of Marmara.

Many residents on the coasts rely on fishing and tourism, so the sea snot is having a major impact. “Our work reduced up to 70 percent,” one sea snail hunter told Daily Sabah.

But what is it and why the Sea of Marmara?

The Sea of Marmara has been hard at work for these past decades thanks to the fact that it receives approximately 20 million people’s and industrial wastewater.

There are five metropolitan municipalities and two provincial municipalities surrounding it, and in these areas, municipalities treat their domestic wastewater with physical treatment — the cleaning of only coarse materials —, and get rid of these waters through deep-sea discharge — a liquid waste disposal technology which is put into practice to prevent coastal pollution in regions without treatment facilities. There also plants that decarbonize the water and advanced biological treatment plants; however, they are a minority.

These waters are discharged to the seabed at depths of 40 to 50 meters, and this technique is used since officials say the undercurrent coming from the Mediterranean Sea is going to the Black Sea will enable the sea to “breath” and clean itself.

However, that hasn’t been the case. The intense pressures, domestic, industrial, and agricultural and animal husbandry wastewater, on the sea, have started to slowly kill the life beneath the waves. While these are discharged into the sea, they are often not treated and the purification levels required in the first place are not up to standards.

The biggest evidence of the poor wastewater management in Marmara can now be seen by anyone who fancies a walk on its white-stricken shores. This substance is marine mucilage, widely known as ‘sea snot,’ which is a collection of mucus-like organic matter found in the sea. It arises as a result of prolonged warm temperatures and calm weather in regions where the water has an abundance of nutrients.

When nutrients such as nitrogen and phosphorus are widely available in the seawater, the phytoplankton grows out of control; and while they are necessary for a healthy sea, their abundance creates the opposite effect, hence the mucus-like matter that now plagues the shores of Turkey.

There is also the problem of filling the shores with soil to make more land. There’ve been many instances of such practices on the shores of Marmara, and the disturbance of the natural shoreline exacerbates the creation of mucilage. When coastal areas are destroyed, biodiversity decreases and habitat loss occurs, causing a further increase in phytoplankton. Moreover, the destruction of natural coastal structures also eliminates the possibility of the sea cleaning itself by hitting the shore with waves. The silicon in filled areas also has been found to trigger sea snot, in many researchers.

Global warming also exacerbates the issue since warmer, slower-moving waters increase the generation of sea snot, allowing them to gather in massive blobs where they can harbor bacteria that endanger marine flora and wildlife.

Overall, though, the main culprit is the untreated wastewater. “If we manage these three main sources of pollution correctly, we can achieve a cleaner and healthier Marmara,” Prof. Mustafa Öztürk told Interesting Engineering, who has studied both chemical engineering and environmental engineering. “These three polluting sources increase the nitrogen phosphorus nutrient element of Marmara excessively and makes phytoplankton formation inevitable.”

What is at stake?

“We can’t ignore the negative impact of deep-sea discharge,” Prof. Yelda Aktan Turan from Istanbul University’s Faculty of Aquatic Sciences told Interesting Engineering. She has previously studied another outbreak of marine mucilage in Marmara in 2007. “With the effect of the hydrographic conditions of the region, a certain percentage of the deep discharge causes an increase in the upper layer nutrient load by returning to the upper water layer, especially in certain periods.”

The most obvious effect of mucilage is that it reduces visibility, thus limiting photosynthesis by preventing sunlight from reaching deep regions. “This leads to the lack of oxygen in deeper regions,” said Aktan Turan. “Oxygen concentration, which is already at critical numbers, ​ decreases further with the collapse of the material to the bottom, and this result especially poses a serious threat to living things.”

This is how mucilage destroys life: By covering the gills of sea animals immersed in it, shutting off their oxygen supply, and suffocating them to death. Immobile organisms such as corals are particularly vulnerable since sea snot gets wrapped around them, impairing their ability to feed or breathe. If this trend continues, Marmara, which was once home to many fishes and aquamarine waters, could end up having a sea of dead marine flora and wildlife blanketed by the viscous, greyish substance.

What should be done?

This is something all scientists agree on: The waters have to be further purified to reduce wastewater pressures since it is crucial for decreasing nutrient levels. So what should be done on an engineering level to fix this decades-old problem?

There are about 100 deep-sea discharge points in Marmara, Öztürk says. “Inspections should be increased at these points and the water should be brought to sensitive area levels. Treatment plants should be upgraded with immediate projects,” he explains.

These projects can be carried out in a maximum of three months because they are based on already known techniques and are known by environmental engineers. According to Öztürk, if one would build on a carbon removal facility, it would add an additional 5 to 10 percent cost to the facility. “However, if the project is done on a physical treatment, the conversion of the plant requires a big investment.”

In order to minimize the excess nitrogen and phosphorus, Turkey needs to implement advanced purification technologies, and the Sea of ​​​​Marmara should be declared a sensitive area, Öztürk says. “While some areas had already been declared as vulnerable in 2016, we know that even in those sensitive areas, municipalities don’t treat the waters according to the sensitive area limit.”

This is especially important for gulf regions. Öztürk says that the wastewater in the gulf regions should be disinfected with UV rays, not with chlorine or other disinfectants since this could cause the water to develop carcinogenic substances, and should be used as irrigation water in agricultural areas or in industry.

All these projects can be done in two years, according to Öztürk, and Marmara’s water would be renewed in the next year since water entering from the surface, which comes from the Black Sea, leaves the Marmara in 5 to 6 months and goes to the Mediterranean. “If we manage to renew Marmara’s water, it will be 10 times cleaner, healthier, and of higher quality in just two years,” Öztürk says.

While some governors say waiting out the problem could solve the issue, it is definitely not the way to go since unless a more direct approach is taken against the sea snot, the problem will surely resurface in the years to come, as climate change worsens and the seas become hotter.

“The main trigger is warming related to climate change, as phytoplankton grow during higher temperatures,” explained Neslihan Özdelice, a marine biologist at Istanbul University, to the Guardian. “This is also an outcome of overfishing because as filter feeders which consume phytoplankton are excessively hunted, it allows room for [phytoplankton and sea snot] to breed.”

The ministry is now inspecting 91 different sites of the Sea of Marmara, as well as all wastewater refining and solid waste facilities on land, with a team of 300 people, to determine the cause of the contamination.

Murat Kurum, Turkey’s environment minister, stated that he intends to make the whole Sea of Marmara a protected area, minimize pollution, and enhance wastewater treatment from coastal settlements and ships.

He also invited local citizens, artists, and non-governmental organizations to participate in what he described as Turkey’s largest ocean clean-up effort, which began on Tuesday. “We will take all the necessary steps within three years and realize the projects that will save not only the present but also the future together,” he said, per Daily Sabah.

One of the plans seems to be reducing nitrogen levels by 40 percent, which could help restore the waters to some degree.

The Turkish president, Recep Tayyip Erdoğan, also commented on the issue by blaming the outbreak on untreated water from cities, and vowed to “clear our seas from the mucilage scourge.” He stated that the problem could get much better if it spread to the Black Sea, and that they have to act before it is too late.

Erdoğan also noted that the problem could spread to the Black Sea, too, and that they would act before it is too late.

The seawater has warmed by 35.6-37.4°F (2-3 °C) since preindustrial times; however, since Turkey can’t reverse global warming on its own, controlling overfishing and wastewater discharges seems to be the only way out.

“June is especially important,” Öztürk says. “Because we generally see that the pollution decreases in June. If it decreases in this month, the problem will be delayed for a while and in the meantime, we can start the projects. The Sea of Marmara is alarming us, saying ‘you have to invest before it’s too late.'”