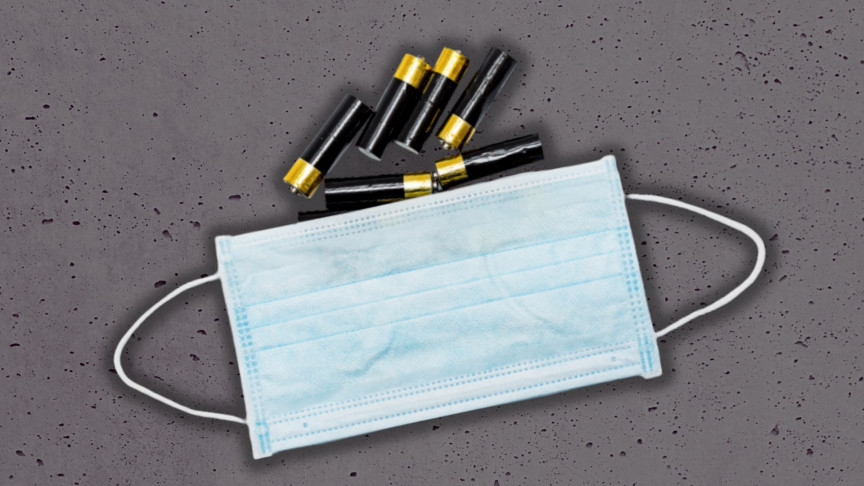 With the emergence of the COVID-19 pandemic, humans have become reliant on personal protection equipment, or PPE, more and more with each wave of infection. While single-use face masks make up a large portion of PPE around the world, not much thought has been given to the proper disposal of these products.

While these products are crucial in our fight against COVID-19, they undoubtedly take a toll on the environment, ending up in landfills and oceans, giving off toxic gases. In only 2020, 52 billion face masks were made and 1.56 billion of them ended up in our oceans.

Recycling used face masks into road material and sanitizing face masks with electric cookers are just some of the ways we’ve previously tried to deal with the worrying issue. Now, a team of scientists from the National University of Science and Technology “MISIS” along with colleagues from the U.S. and Mexico has come up with a novel method of turning used masks into low-cost, flexible, disposable, and efficient batteries. The study is published in the Journal of Energy Storage.

In order to recycle the masks, the team first disinfected the masks using ultrasound and dip them into ink made of graphene. The masks were then compressed and heated up to 284°F (140°C) to form pellets to work as the electrodes of the battery. These pellets are separated by an insulating layer that’s also made out of used masks. The final step is soaking the whole thing in an electrolyte and wrapping it in shells made of waste drug blister packs. This way, medical waste created the basis for the batteries, with the only thing needed to finish the equation being graphene.

To explain the process, professor Anvar Zakhidov, scientific director of the infrastructure project “High-Performance, Flexible, Photovoltaic Devices Based in Hybrid Perovskites” at NUST MISiS, said “To create a battery of the supercapacitor type, the following algorithm is used: first the masks are disinfected with ultrasound, then dipped in ‘ink’ made of graphene, which saturates the mask. Then the material is pressed under pressure and heated to 140°C (conventional supercapacitor batteries require very high temperatures for pyrolysis-carbonation, up to 1000-1300°C, while the new technology reduces energy consumption by a factor of 10). A separator (also made of mask material) with insulating properties is then placed between the two electrodes made of the new material. It is saturated with a special electrolyte, and then a protective shell is created from the material of medical blister packs (such as paracetamol),” in the university article.

While the process is inspiring in itself, the team found the batteries to be quite effective. Researchers claim that they achieved an energy density of 99.7 watt-hours per kilogram (Wh/kg). That’s approaching the energy density of the ubiquitous lithium-ion battery, which ranges between 100 and 265 Wh/kg.

According to the article, the researchers improved the battery by adding nanoparticles of a calcium-cobalt oxide perovskite to the electrodes. This increased the energy density by more than double, bringing it up to 208 Wh/kg. The best-performing version of the battery retained 82 percent of its capacity after 1,500 cycles and could deliver energy for more than 10 hours at a voltage up to 0.54 V.

The new method could pave the way for the production of superior batteries in several ways to heavier, metal-coated conventional batteries, which require more manufacturing costs. The thin, flexible, low-cost batteries are also disposable and can be used in household appliances from clocks to lamps in the future.