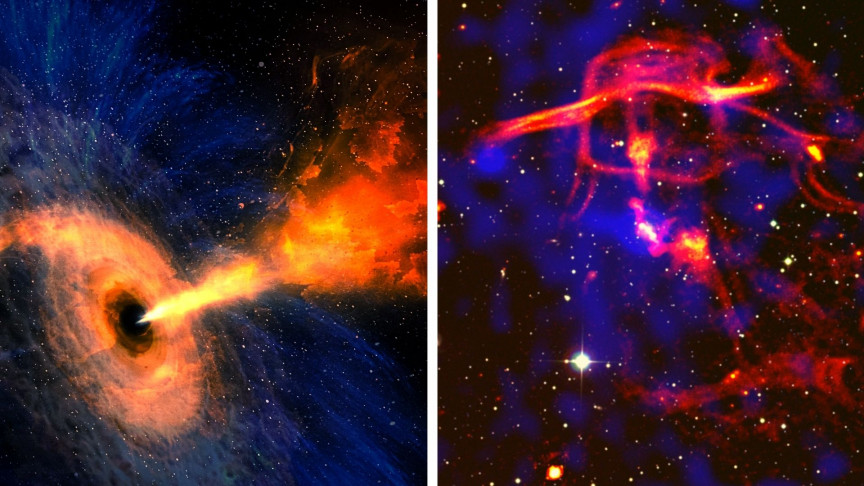 An international team of researchers successfully observed warm gas emitting from an active black hole for the first time, according to a recent study published in the journal Nature Astronomy.

And the team witnessed bizarre structures that looked like the smoke streams seen on Earth during volcanic eruptions, which have grown to unimaginable scales over one hundred million years.

The study honed in on a galactic system called Nest200047, which is a group of roughly 20 galaxies at a distance of roughly 200 million light-years. The central galaxy of this distant system contains an active black hole, and, surrounding it are many pairs of gas bubbles of varying ages, some unexplained magnetic field filaments, and, most crucially, relativistic particles in special relativity that can span and an unconscionable distance of thousands of light-years. The novel observations happened thanks to the LOw Frequency ARray (LOFAR), which is the largest low-frequency radio telescope in the world. LOFAR can pick up radiation generated by the oldest electrons present-day technology can detect.

The LOFAR was engineered via a collaborative effort of nine European countries, and enabled researchers to peer “back in time” to a comparably recent era on cosmological scales: 100 million years ago. This allowed the researchers to check out what this colossal black hole at the center of NEST200047 was doing long ago. “Our investigation shows how these gas bubbles accelerated by the black hole are expanding and transforming in real time,” said Marisa Brienza, a researcher at the University of Bologna who was also first author of the study. “Indeed, they create spectacular mushroom-shaped structures, rings and filaments that are similar to those originating from a powerful volcanic eruption on planet Earth.”

Supermassive black holes have more impact than their host galaxies

A supermassive black hole is churning within the center of every galaxy. And the activity of this central black hole directly determines the evolution of the galaxy, and by necessity, the intergalactic region surrounding it. Researchers have tried for years to determine how and at what rate the behavior of these central black holes creates intergalactic effects. While in an active phase, these black holes consume whatever strays too close to the galactic center, and when that happens, a gigantic amount of energy is released. Sometimes this energy takes the form of streams that shoot out at nearly the speed of light, generating radio waves. These streams can also lead to the creation of particle bubbles, in addition to gigantic magnetic fields that can heat and shuffle the intergalactic medium of the surrounding environment.

Such expanding heat bubbles have a heavy influence on how the intergalactic medium and, in turn, the rate of star formation. This recent study suggests that active black holes can affect these processes on scaled 100 times larger than the hosting galaxy itself, and that this enormous impact can last for hundreds of millions of years. “LOFAR gave us a unique view of the activity of black holes and their effects on their surrounding environment,” said Professor Annalisa Bonafede of the University of Bologna, who is also an author of the study and an INAF member. “Our observations of Nest200047 crucially show how magnetic fields and the very old particles accelerated by black holes and consequently aged play a role in transferring energy to the outer regions of groups of galaxies.” Someday, because of this data, we might reveal the nature of the magnetic filaments by combining data from international LOFAR stations with the angular resolution from the same radio telescope. And this will bring us one step closer to a better understanding of some of the most powerful forces in the universe.