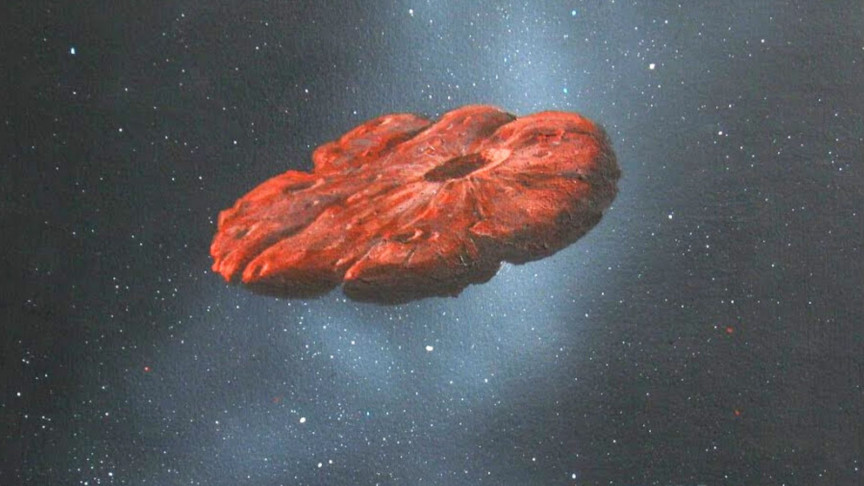 Back in 2017, the first interstellar object detected from beyond our solar system swooped into our cosmic neighborhood and showed up on the Pan-STARRS astronomical observatory’s screens in Hawaii. Called ‘Oumuamua — which means “scout” or “messenger” in Hawaiian — the interstellar visitor was similar to a comet in size, but showed features a little too strange for easy classification.

Renowned astrophysicists like Harvard Professor Avi Loeb suspected the object was actually the refuse of alien technology — perhaps a space buoy or alien probe, or even wreckage of a spaceship from another world. But two Arizona State University astrophysicists discovered the object’s most likely origin: A Pluto-sized planet in another solar system, according to a pair of studies recently published in the AGU Journal of Geophysical Research: Planets.

“In many ways ‘Oumuamua resembled a comet, but it was peculiar enough in several ways that mystery surrounded its nature, and speculation ran rampant about what it was,” said Steven Desch, a co-author of the studies and professor in the School of Earth and Space Exploration, in a Phys.org report. Desch and Alan Jackson — also a professor of the same department at Arizona State — identified several characteristics of the object that differed from what one normally expects from a comet.

The object entered the solar system at a lower velocity than scientists would expect, which suggests it hadn’t traveled in interstellar space for more than a billion years. And its shape was also strange — shaped like a pancake, it appeared more flattened than any known object in our solar system.

The scientists also noticed the object’s apparent “push” away from the sun (also called the “rocket effect” common in comets while sunlight vaporizes inherent ice) was much stronger than typical explanations for interstellar objects could explain. Last but not least, the object didn’t show signs of a detectable gas escaping due to solar vaporization — which typically gives comets their trademark tail.

In short, the object appeared similar to a comet, but if it was one, it wasn’t one like any ever seen in our solar system before.

Compiling and analyzing all available data on ‘Oumuamua, Desch and Jackson hypothesized that the object was composed of various ices. Calculating the rocket effect from the object’s mass and shape — in addition to the reflectivity of the ices — the researchers realized a new solution for ‘Oumuamua’s outsized “rocket effect.”

“That was an exciting moment for us,” said Desche, according to the Phys.org report. “We realized that a chunk of ice would be much more reflective than people were assuming, which meant it could be smaller.”

“The same rocket effect would then give ‘Oumuamua a bigger push, bigger than comets usually experience,” added Desch.

Both researchers found one form of ice — solid nitrogen — that provided data that was an exact match to all of the object’s strange features. All of them, at once. Solid nitrogen ice was also seen on the surface of Pluto, which means the comet-like object was likely made from the same material, with a similar origin.

“We knew we had hit the right idea when we completed the calculation for what albedo (how reflective the body is) would make the motion of ‘Oumuamua match the observations,” said Jackson — who is also an Exploration Fellow at ASU. “That value came out as being the same as we observe on the surface of Pluto or Triton, bodies covered in nitrogen ice.”

“It was likely knocked off the surface by an impact about half a billion years ago and thrown out of its parent system,” added Jackson in the Phys.org report. “Being made of frozen nitrogen also explains the unusual shape of ‘Oumuamua. As the outer layers of nitrogen ice evaporated, the shape of the body would have become progressively more flattened, just like a bar of soap does as the outer layers get rubbed off through use.”

The strange and ambiguous behavior of the interstellar object led some to speculate whether the object was a piece of alien technology — namely, in the recently published book “Extraterrestrial: The First Signs of Intelligent Life Beyond Earth” by Harvard University’s Professor Avi Loeb.

“Everybody is interested in aliens, and it was inevitable that this first object outside the solar system would make people think of aliens,” said Desch. “But it’s important in science not to jump to conclusions.”

“It took two or three years to figure out a natural explanation — a chunk of nitrogen ice — that matches everything we know about ‘Oumuamua. That’s not that long in science, and far too soon to say we had exhausted all natural explanations.”

There remains no available evidence definitively suggesting the presence of alien technology during the object’s 2017 passage through our solar system, but the study from Jackson and Desch is the latest in a series of analyses of an extra-solar object — a rare opportunity that expands our scientific grasp of what other planetary systems are like, and how different and alike they are to our own.