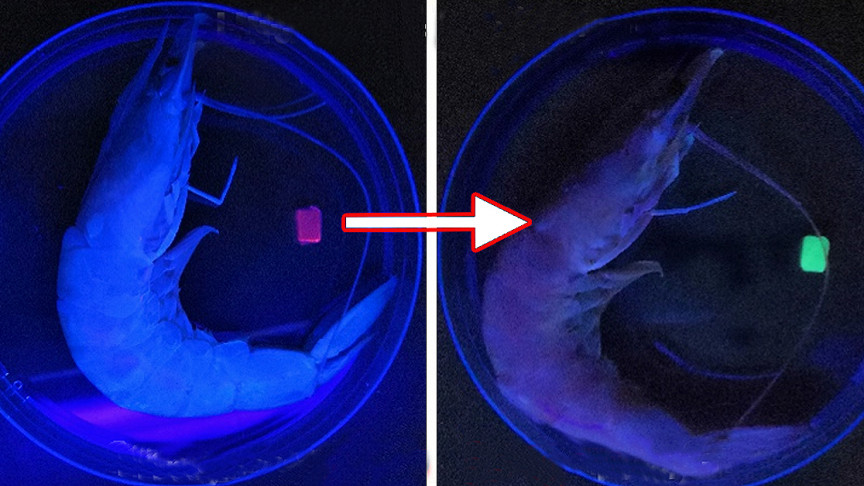 Biomimetic soft camouflaging skins can one day be used to replicate the color-changing functions of living organisms’ skins and aid in achieving active camouflage and paving the way for revolutionary changes in robotics. An international team of scientists From China and Germany has taken a step toward that goal — all the while establishing a novel technology that can detect seafood freshness.

Scientists created an artificial color-changing material that mimics chameleon skin by organizing luminogens (molecules that make crystals glow) into various core and shell hydrogel layers rather than one uniform matrix, according to a study published in the journal Cell Reports Physical Science.

Thanks to this new design, a two-luminogen hydrogel chemosensor can be used to detect seafood freshness by changing color according to the amine  — an organic compound formed by replacing one or more hydrogen atoms in ammonia with organic groups — vapors emitted by microbes as fish goes bad.

Taking inspiration from the future

This concept goes back a couple of decades since scientists have already envisioned developing soft materials that can change color with ease. However, it is rare for synthetic materials to change hue as artfully as chameleons do — nature has had millions of years to perfect the art, after all.

“Most artificial color-changing soft materials have been prepared by simultaneously incorporating two or more responsive luminogens into one single elastomer or hydrogel matrix,” explains author Tao Chen, a professor at the Ningbo Institute of Materials Technology and Engineering at the Chinese Academy of Sciences. “On the other hand, the organization of different iridophores into two superposed core-shell structured layers constitutes an evolutionary novelty for panther chameleons that allows their skins to display complex structural colors.”

But how do you achieve ‘colors’?

Scientists created the multi-luminogen layered hydrogen device by first synthesizing a red fluorescent core hydrogel to see if artificial color-changing materials could be imbued with the normal core-shell structure of chameleon skin. This served as a template for the other layers. This core hydrogel was then incubated in various aqueous Europium solutions, and in a growth solution containing sodium alginate and receptive blue/green fluorescent polymers.

The creation of blue and green hydrogel layers was caused by the spontaneous diffusion of Europium ions from the central hydrogel into the surrounding solution. Thanks to the way the core and shell layers of the hydrogels overlapped, they could change from red to blue or green in response to changes in temperature or pH.

Furthermore, the emission color of the blue and green fluorescent layers could be changed, enabling the material to show colors from nearly the entire visible spectrum.

“The proposed diffusion-induced interfacial polymerization to prepare core-shell materials proves to be general,” suggests Chen. “It is thus highly expected that the proposed synthetic strategy could be expanded to produce other soft color-changing materials, such as smart hydrogels or elastomers with stimuli-responsive structural color or pigment color change.”

During experiments, the chemosensor was used to detect seafood freshness by sealing test strips made from the material in boxes with fresh shrimp or fish for 50 hours. It was seen that the test strip stored with seafood at less than 14°F (-10°C) didn’t really change its original red fluorescent color — this means the food was still fresh — while the other one which was stored at 86°F (30°C) took a vivid green hue. This meant “Don’t eat the fish nor smell it — just throw it away” in a way, because it was spoiled.

While detecting spoiled fish might not seem that related, this has numerous potential applications in robotics.

“In the near future, we plan to utilize the developed chameleon skin-like core-shell hydrogels to prepare biomimetic soft camouflaging skins, which can be used to mimic the diverse color-changing functions of living organisms’ skins and to help achieve desirable active camouflage, display, and alarm functions in robots,” says Chen.