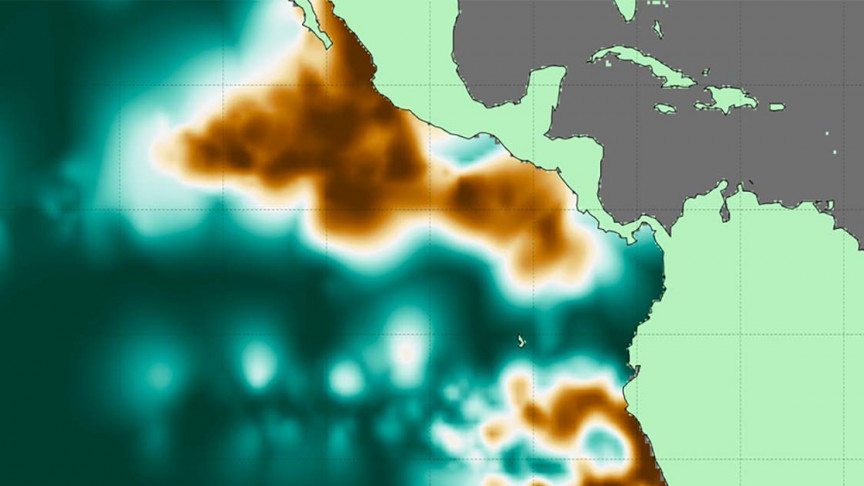 Oxygen-deficient water in the ocean is one of the biggest threats to marine species there is, driven in large part by human activity. Now, a team at the Massachusetts Institute of Technology (MIT) has created a 3D atlas of oxygen-starved regions of the tropical Pacific Ocean that they hope will help predict the marine impact of climate change.

“It’s broadly expected that the oceans will lose oxygen as the climate gets warmer. But the situation is more complicated in the tropics where there are large oxygen-deficient zones,” said Jarek Kwiecinski, who developed the atlas along with Andrew Babbin, the Cecil and Ida Green Career Development Professor in MIT’s Department of Earth, Atmospheric and Planetary Sciences. “It’s important to create a detailed map of these zones so we have a point of comparison for future change.”

So far, the map covers two major ODZs in the Pacific, the first stretching out from the coast of South America is calculated to be about 600,000 cubic kilometers in volume, enough water to fill 240 billion Olympic-sized swimming pools. The second zone, off the coast of Central America, is even bigger, at about three times the size of the first.

The 3D maps were built using four decades worth of oceanic data, or about 15 million measurements. They compiled this data and analyzed oxygen levels at different depths and coordinates, similar to the way you can generate slices of 3D scans.

The measurements are important for two major reasons. First, it will allow us to see the potential boundaries of major fisheries and marine ecosystems, helping fishery management and conservation efforts, as well as better directing environmental protection efforts.

It’s also important since ODZs are a major source of nitrous oxide, which is a powerful greenhouse gas.

The new atlas and the technique for creating it will hopefully lead to more maps for other parts of the world threatened by ODZs. The MIT researchers published their work in the journal Global Biogeochemical Cycles this week.

How Does Climate Change Cause Ocean Deoxygenation?

According to the International Union for Conservation of Nature, the world’s oceans have lost about 2% of their oxygen since the 1950s, and they are expected to lose 3% to 4% on average by 2100.

This is because as the oceans warm, they are less able to hold onto their oxygen, which leaves less oxygen to circulate deeper into the darker, less oxygen saturated regions of the oceans.

The other major problem is algal blooms, which result from fertilizer run-off along coastal regions and not only increases toxicity in the ocean but also help deplete the local region’s oxygen, leading to dead zones where marine life can be suddenly killed off.

All of this has a massively detrimental impact on marine life, causing migration disruptions, biodiversity loss, and threats up and down the aquatic food chain. That is what makes understanding where and how these ODZs develop so critical.

“How the borders of these ODZs are shaped, and how far they extend, could not be previously resolved,” Babbin said. “Now we have a better idea of how these two zones compare in terms of areal extent and depth.”

“This gives you a sketch of what could be happening,” Kwiecinski added. “There’s a lot more one can do with this data compilation to understand how the ocean’s oxygen supply is controlled.”