Samsung Sero review: The rotating TV no one asked for 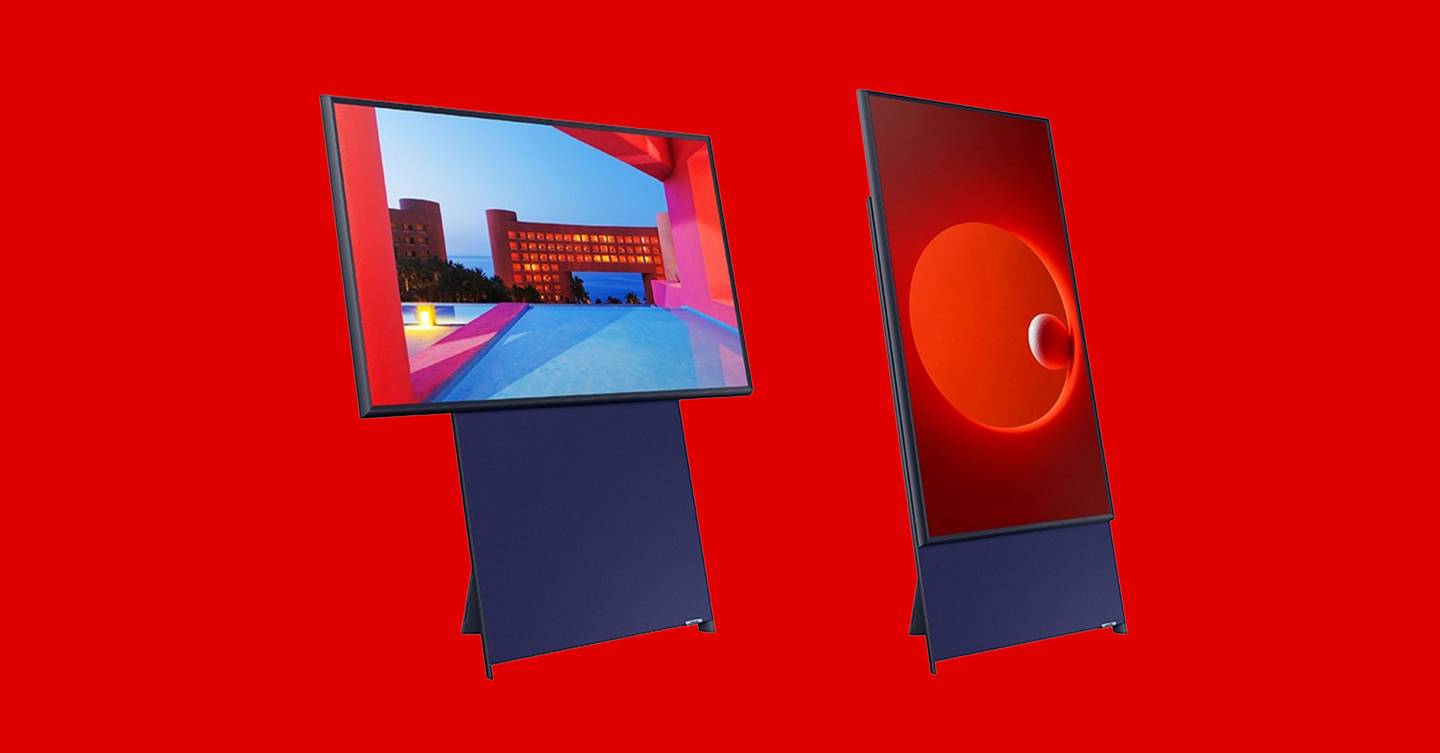 As you’re reading this, countless designers and marketers around the world are rifling through our attributes and sorting us accordingly. From boomers to zoomers, to millennials and Gen Zs, our needs and desires are being meticulously catalogued and predicted.

Enter the Samsung Sero. Or Samsung, The Sero, if you’d rather be technical. Aimed at the millennial-laden social-media crowd, it wants to change the way you consume Instagram, TikTok, Snapchat and more, with an eye-catching party trick – the ability to rotate from horizontal to vertical at the touch of a button. The fact that Samsung provides instructions to turn the Sero’s box into a house for your cat, is merely an added bonus.

At £1,600 for just 43 inches of screen, however, you’re definitely paying a premium for that fancy swivelling action. As an older millennial and heavily addicted TikTok user, I approached the Sero with a mix of trepidation and cautious optimism. Let’s find out if it’s worth extra cost.

If you hate being forced to live with a giant black rectangle in your living room, then the Sero’s unusual form could be considered a welcome alternative – if you can get on board with its aesthetic.

Angled back, with soft-touch material at its base covering the speakers, Samsung is clearly going for something resembling a futuristic easel. You might think they have nailed it. Others might think it looks like a conference-booth display welcoming you to browse the latest innovations in garden furniture. It is certainly polarising.

The Sero’s default state is in this vertical form which, coupled with its in-built screensavers consisting of picturesque scenes, posters or various clock faces, aims to make it appear to be anything other than a spinning telly.

Press the all-important rotate button, and the screen smoothly spins around, presenting you with a more traditional landscape view of a TV – albeit one mounted on a thick stand. It wouldn’t look out of place in a Bang & Olufsen showroom, considering B&O also has its own shape-shifting TV, the Beovision Harmony.

It’s worth pointing out that you’ll want to set up the Sero with plenty of room on each side at first, just to get a better idea of how much real estate the screen needs. The last thing you want is an expensive bit of kit colliding with your sideboard.

We’ll get to the usual TV review gubbins in a bit, but it would be madness not to focus mostly on the Sero’s smartphone mirroring – it’s the entire reason for its existence, after all. While the Sero’s 43in display is on the small side for a TV, its vertical orientation means that your handset’s screen is blown up to gargantuan proportions. The equivalent size of mirroring to a regular 55- or even 65-inch TV would still be far, far smaller, as you’re limited by a traditional screen’s height.

During lockdown, my girlfriend and I have taken to shielding our brains from the copious amounts of negativity in the world by watching TikTok videos together in the evening. Pre-Sero, we’d just hunch over my phone, which doesn’t lend itself to a comfortable experience. I’ve tried mirroring my phone to our regular landscape TV of course, but from across the living room, the tiny size of the mirrored screen makes it a pointless exercise. You can’t read captions or comments, and you miss out on details. The Sero changes that.

Now, we sit comfortably laughing (mostly at cats – maybe this explains the box/cat-home design?) at a size of display that’s not only comfortable, but far more immersive. The TikTok-browsing experience is much improved, and there’s nothing else out there currently that can match what the Sero offers for this (very particular) scenario.

Outside of TikTok, though, I haven’t found much use for the Sero’s vertical powers. The only other social media app that gets any heavy use from me is Instagram. While stories and shots look glorious on the Sero’s larger display, Instagram itself is, by its nature, a more cluttered app, with comments beneath every photo or video, ruining the immersion somewhat. Unlike TikTok, I don’t whittle hours away browsing through my Instagram feed either, and after ten minutes of being plastered with product ads and seeing people’s selfies, I’m done.

After a weekend of heavy testing, I found myself using the Sero purely for TikTok, for a couple of hours each evening, which, given the fact that I haven’t got out much for the past few months, is quite a small chunk of time in the grand scheme of a day.

As a regular TV, the Sero’s 4K QLED display performs well. Bright, punchy colours, combined with decent black levels and contrast make for a pleasant viewing experience. Its smaller size, coupled with that resolution ensures that content is pin-sharp, too.

However, this isn’t a TV for cinephiles, (nor is it trying to be the centrepiece of an elaborate home theatre setup). While the Sero’s screen performance doesn’t disappoint, it does fall flat in one key area. Many people are used to viewing content on screens that are 50 inches and above, and even in a small apartment, the Sero left me wanting for more when watching regular content.

Granted, a larger screen size would have resulted in an even taller, more expensive design with a heavier swivel mechanism, but with the average global screen size hovering at around 47 inches, there’s simply no denying that landscape content on the Sero feels small.

Size aside, things on the audio front are positive, thanks to the Sero’s 60W, 4.1ch front-firing speakers, hidden beneath the material of the base. I’m probably the only person in the world that doesn’t like Hamilton (disliking musicals in general probably didn’t do me any favours), but even I managed to enjoy the first 30 minutes or so, thanks to the speaker setup that Samsung has managed to cram into the Sero. Clear mids and highs project across the room with ease, balanced well by the hefty bass performance.

While the Sero naturally doesn’t offer the same depth and room-filling loudness of a dedicated soundbar or speaker setup, its out-of-the-box performance is more than formidable in its own right.

Without getting bogged down too much in menu descriptions, the Sero’s remotes and menus will be familiar to anyone that’s bought a Samsung TV over the past few years, with a few exceptions.

The screen orientation button is obviously one of the major differences, alongside the portrait mode menu which allows you to set different pictures and posters as a screensaver. If you’re using the Sero as a Bluetooth speaker, you can also select from a few different equaliser screensavers that react to the music, which is a nice touch.

Beyond that, it’s all rather straightforward, save an extra feature which appears to be limited to Samsung handsets – namely the ability for the Sero to rotate automatically when you change the orientation of your phone. For non-Samsung phone owners, this just means you’ll have to press a button on the remote.

You could quite convincingly argue that the Sero is a product that simply doesn’t need to exist. As far as I’m aware, no one was crying out for a vertical TV, and its reveal was met with articles focusing on ‘crazy millennials’ and their love for avocado toast, TikTok dances and job-hopping.

The Sero fills a very specific niche. At its best, it can transform the way you browse and interact with certain apps, creating a more immersive experience that you can enjoy with others – especially considering that so many photos and videos are also taken vertically.

That it does this while offering the flexibility to watch regular content at the touch of a button is testament to its clever design. Having said that, there’s no sugarcoating the fact that you’re paying a heck of a lot of money for a 43in TV – especially when you can pick up something like the excellent 55in Philips 55OLED754 for under a grand.

If you’re the type of person who buys one TV at a time and expects it to last at least seven years, then the size:cost ratio of the Sero is impossible to justify – unless you spend considerable parts of your day consuming vertical content.

For now, the Sero is an impressive feat of design and engineering that not many people will buy, and in a tech landscape bursting with uninspiring cookie-cutter designs, that’s OK. Though maybe not for Samsung.