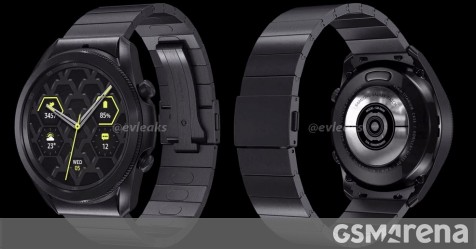 The Samsung Galaxy Watch3 has leaked yet again, this time it’s photos of the smartwatch taken as part of the certification process by the NCC. They show the watch with a silver exterior and a black leather band.

Based on previous rumors, the watch body will be made out of stainless steel and will come in several color options: Silver (pictured), Black and Bronze. There should be titanium option painted in Black too. Also, the watch will come in two sizes – 41 mm and 45 mm, with 1.2” and 1.4” screens, 247 mAh and 340 mAh batteries, respectively.

You can also see the included wireless charger, which outputs power at 5 W (the charger itself seems to be powered by a regular USB-A to microUSB cable).

Aas you can see in the photos, the rotating bezel is back. The watch should be available in LTE and Wi-Fi only flavors and will have an ECG sensor (though that feature may be region-locked) as well as tracking your blood pressure.

Meanwhile, the latest tweet from leakster Evan Blass demos various watch faces and their widgets. The video also goes over some key features like checking messages, answering calls and a music player (Spotify will allegedly be pre-installed in the US).

The current info is that the Galaxy Watch3 will be unveiled at the Samsung Unpacked event on August 5 that will bring the new Galaxy Note20 phones as well as the two new foldables.