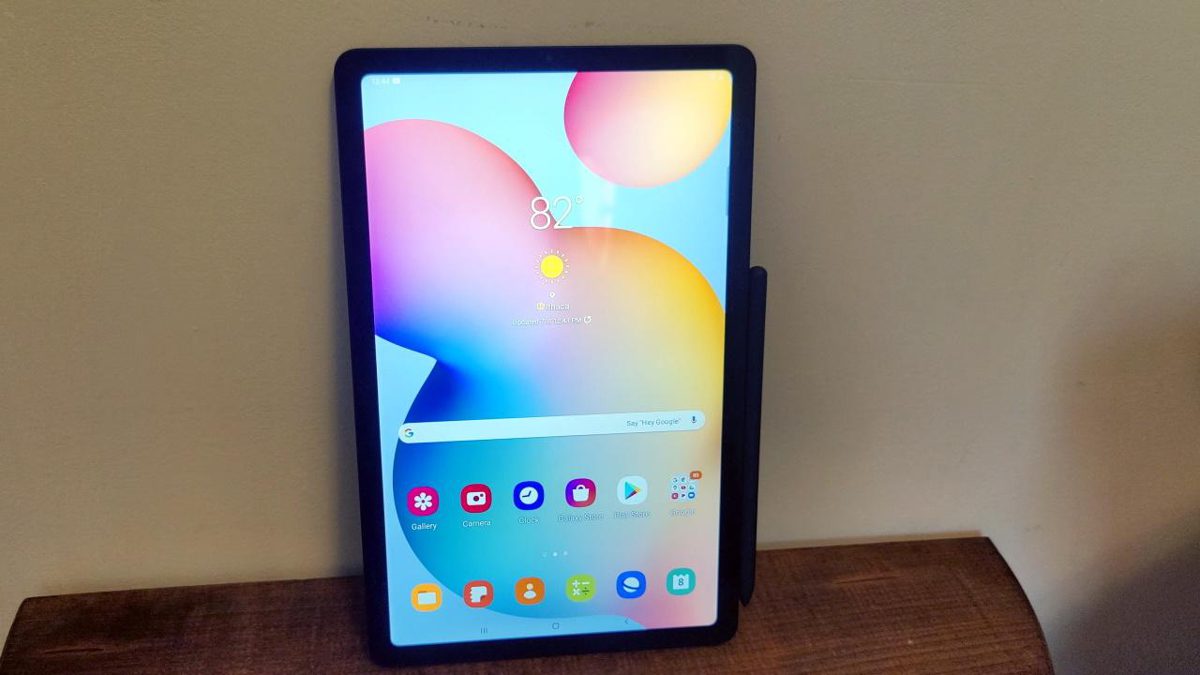 Creativity comes easy with the $349.99 Samsung Galaxy Tab S6 Lite, the best way to get an active stylus tablet at a relatively low cost. The S6 Lite’s included S Pen stylus gives you a pen experience for $80 less than the base iPad plus Apple Pencil, making this tablet a good choice for people doing note-taking or art on a budget. The base iPad remains our Editor’s Choice because there’s so much more creative software available for that platform, though.

The Android tablet world is a little odd. There’s a vibrant range of sub-$200 media tablets such as the Amazon Fire line and Walmart’s Onn. tablets, but above that, the market is so dominated by various iPads that Android tablets get relatively little air. Samsung is still out there swinging, though, with its low-midrange Tab A line, its high-end Tab S6, and now the 64GB S6 Lite, which competes with the 32GB base model iPad ($329).

The tablet doesn’t feel low-end. It’s made of a classy, matte gray material, measuring 9.6 by 6.1 by 0.27 inches (HWD) and weighing 16.4 ounces. There’s a mid-sized, even bezel around the screen, which means no home button or fingerprint sensor, so you’ll have to get used to Samsung’s relatively insecure face unlock or typing in a passcode. A USB-C port sits on the bottom, with a standard 3.5mm headphone jack on top. That last is especially welcome.

The S6 Lite has dual speakers on the sides, which give surprisingly good stereo separation. You can really tell the channels when you’re listening to music or watching videos.

The 10.4-inch, 2,000-by-1,200-pixel TFT LCD screen has 224 pixels per inch. It’s fine, but if you’re used to AMOLED screens, the LCD will seem a bit washed out. Similarly, if you’re used to higher-pixel-density displays such as 2,560-by-1,600 screens, you’ll notice some jaggedness and pixelation in text. It all depends on what you compare this to. The base-model iPad has a 264ppi display, which isn’t much different; less expensive tablets are usually 1,280-by-800, which is significantly worse than the Tab S6 Lite.

The S6 Lite’s star feature is its S Pen stylus, included in the box. The S Pen clips to the side of the tablet magnetically; it doesn’t fall off when you’re carrying it around. The pen is gray, with one flat side, and is both pressure- and tilt-sensitive. The screen is smooth glass, and the S Pen doesn’t have a very grippy feel; it definitely slides a bit.

The S Pen clips to the side of the tablet.

Writing and drawing with the S Pen are excellent. The stylus isn’t ever laggy or misaligned, and the pressure sensitivity works smoothly in a wide range of applications. Samsung has been perfecting pen input for years, and it shows.

The stylus doesn’t come with any replacement nibs, and some user reviews have complained about nibs fraying after a few weeks; it works with Galaxy Tab S6 nibs, though, and you can get a 5-pack of those on Amazon for $6.

The Tab S6 Lite uses a Samsung Exynos 9611 processor with four 2.31GHz cores and four 1.74GHz cores. In benchmarks, that means really mediocre performance. We got a mere 5,502 in the PCMark Work benchmark, 284/1,136 in Geekbench, and 198.36 in Basemark Web. In PCMark Work, that put the Tab S6 Lite on par with less expensive tablets like the Samsung Galaxy Tab A 8.4 and LG G Pad 5, although the S6 Lite did considerably better in the Web browsing benchmark.

The tablet runs Samsung’s version of Android 10. Samsung has updated its earlier Galaxy Tab S4 and S5e as far as Android 10, although not promptly, so you should expect upgrades to arrive here…eventually. The most notable added app is Samsung Kids+, a subscription content service with age-appropriate, branded video and apps from brands like Toca Boca, Crayola, Peppa Pig, and Thomas the Tank Engine. Parental controls here are the standard Android 10 controls based on the Google Family Link app, which lets you monitor usage time and block specific apps.

Using the tablet, I did get the sense that it’s very much optimized for S Pen applications. I never felt a slowdown in Adobe Sketch, Photoshop Express, Autodesk Sketchbook, Bamboo Paper, or even Microsoft OneNote, which is sometimes a hideous beast when you’re working with ink on a tablet. Samsung’s built-in Notes app has surprisingly good handwriting recognition.

The S Pen makes it easy to create artwork.

Like all Android tablets, the Tab S6 Lite works with Bluetooth mice and keyboards. There’s no counterpart to the iPad Air’s hardware port for a dedicated magnetic keyboard case, so by and large you need to go with universal Bluetooth keyboard cases like the Logitech Universal Folio ($59.99) if you want to use this as a primary computing device. The S6 Lite doesn’t work with DeX, which gives some Samsung products a desktop-like interface, and it doesn’t link up to PCs with Samsung Flow, which would let you see notifications and smoothly handle files between your tablet and your PC.

The tablet isn’t good for gaming,either. The Exynos 9611 delivers 9.6fps in the GFXBench Car Chase onscreen test and 26 fps in the T-Rex onscreen test, similar scores to the low-end Amazon Fire HD 8 and well below the LG G Pad 5. In actual gaming, this resulted in poor performance. Fortnite was basically unplayable, with huge jumps between frames. I had problems with Asphalt 8 and Asphalt 9 as well; they didn’t actually stutter, but low frame rates led to a less satisfying play experience than on smoother devices. While the tablet is fine for games that don’t rely on high frame rates—like kids’ dress-up games, card games, and Mini Metro—you just can’t play anything graphically complex on this processor.

Fortnite is pretty, but too jerky to work.

I’m rarely impressed by tablet cameras, with iPad cameras being the perpetual exceptions, and the Tab S6 Lite’s 8MP main camera and 5MP front-facing camera are no different. Both cameras capture 1080p video, and have HDR capability. If you’re using the front-facing camera for video chat in good light, you’ll be fine; outdoors, I found the camera to have rich color. Indoors, though, especially with lower light, it didn’t measure up. Indoor shots were also pale and noisy, with heavy JPEG artifacting.

The matte back features an 8-megapixel camera.

The main camera takes decent outdoor shots, although it had a little bit of trouble with the highlights of a white flower. Once again, issues come up in low light: The color drains out of images and artifacting appears. I wouldn’t make too much of this issue, as tablet cameras are rarely great, but it’s another area where the iPad (which generally uses slightly older iPhone cameras) tends to come out ahead.

The base model has 64GB of storage, with 52.2GB available, and a MicroSD card slot for additional storage. There’s also a 128GB unit priced at $429.99. Battery life was better than the base iPad, at 7 hours, 16 minutes of video playback with the screen at full brightness.

The U.S. model of the S6 Lite is Wi-Fi only, connecting via 802.11ac on both 2.4GHz and 5GHz bands. Compared to a Snapdragon 865-based, high-end phone, I got slightly lower Wi-Fi speeds from the tablet, with an average of around 52Mbps down versus about 60Mbps with the phone. The tablet had greater range from an Eero Wi-Fi access point, grabbing signal more than 100 feet away.

Why Not an iPad?

At $349.99, the Galaxy Tab S6 Lite is clearly positioned as the Android alternative to the base iPad. And considering that the price includes the S Pen (Apple’s Pencil is a $99 add-on), this becomes a better buy for people whose primary use is drawing or note-taking and who don’t have other Apple gear. The problem is software. Android tablet apps form a relatively quiet eddy of the software world, and while Samsung has done a good job making sure that Android software is generally S Pen compatible, it’s safe to assume that the iPad will continue to have a broader array of professional creative apps. It’s the default platform.

Android is easier to work with in some ways, such as with its file system; it’s much easier to download arbitrary files and work on them in Android’s open filesystem than in Apple’s sandboxed one. But in my mind ultimately that doesn’t balance out the fact that if you’re in the creative trades, the word “tablet” probably means “iPad.”

There aren’t many midrange Android tablets for this to compete with. Most Android slates nowadays tend to focus on the low-end, media-consumption market. Samsung’s own Galaxy Tab S5e has a livelier, higher-resolution screen. Huawei’s Mediapad M5 Lite is also a decent tablet, but it has an older version of Android and the pen isn’t as well supported. The full-scale Galaxy Tab S6, meanwhile, is powerful but expensive.

That leaves the Galaxy Tab S6 Lite as the right tablet for a very specific niche: people who want a stylus but for some reason don’t want an iPad. As a reading, sketching, and note-taking tool with a flexible, open file system, the S6 Lite hits the spot.