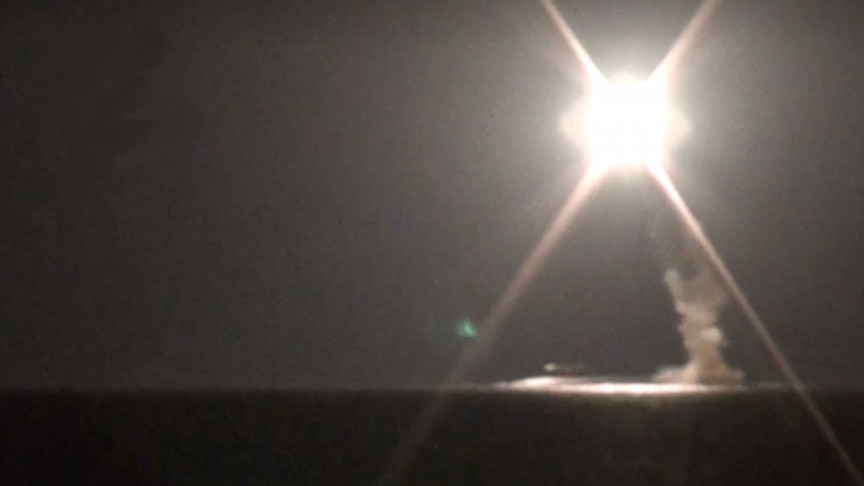 As we reported last week, Russia recently announced that it had successfully launched its new 3M22 Zircon, or Tsirkon, (NATO designation SS-N-33) hypersonic missile from a nuclear submarine. The term hypersonic typically refers to craft that travel at speeds of Mach 5 or greater, that is, five times the speed of sound, which is 1,125 feet per second (343 meters per second) at sea level and temperatures of 20 °C (68 °F).

Zircon is part of what Russia is calling its “new generation” of hypersonic weapons. According to an article on AINonline, in an address to the Russian Federal Assembly on February 20, 2019, Russian President Vladimir Putin said that Zircon was, “able to accelerate to about Mach 9.” That’s nine times the speed of sound, or around 6,850 miles per hour (11,024 km/h).

That same article described Zircon’s body length at an estimated 32 to 36 feet (10 – 11 m), and its warhead weight at 660 to 880 pounds (300 to 400 kg). Whatever the size of its warhead, any object traveling at speeds upwards of Mach 6 will impart a devastating amount of kinetic energy to its target.

Zircon was designed to strike both naval and ground targets, and it is estimated to have a range of 620 miles (1,000 km). It is thought that Zircon has a booster stage containing solid-fuel engines that accelerates it to supersonic speeds and a scramjet engine in its second stage.

That means that scramjets must fly suborbitally, within Earth’s atmosphere, where there is sufficient oxygen content to maintain combustion.

Conventional jet engines use rotating, fan-like components to compress the air before combustion, while scramjets use the speed of the craft moving through the atmosphere, along with internal geometry, to compress the air and as such, require no moving parts.

A scramjet is comprised of a converging air inlet where the incoming air is compressed, a combustor where the gaseous fuel, along with atmospheric oxygen, ignites, and a diverging nozzle where the heated air is accelerated to produce thrust.

To compress the air sufficiently, an aircraft containing a scramjet engine must first be accelerated to hypersonic velocities, usually around Mach 4 or 3,096 miles per hour (4,982 km/h), by some other means of propulsion. This can be a turbojet or rocket engine, or a railgun.

Experts have noted similarities between Zircon and BrahMos-II, which is a hypersonic cruise missile currently under development by India’s Defence Research and Development Organization and Russia’s NPO Mashinostroyenia. Together, they have formed BrahMos Aerospace Private Limited.

During his 2019 annual address to the Russian Federal Assembly, Vladimir Putin said that Zircon was intended to deploy from surface ships and submarines that use the 3S-14 universal shipborne launcher, which is capable of launching both Zircon and Kalibr cruise missiles.

The 3S-14 vertical launchers are currently operational on a number of Russian Navy vessels and are used to fire Kalibr cruise missiles and 3M-55 anti-ship missiles (codename Onix). They are expected to be used on Russia’s new Lider-class destroyers, which was once thought to be canceled, but is now reported to be beginning construction in 2023.

Putin has described Zircon as being “truly unparalleled anywhere in the world,” and that it is “unstoppable” by Western defenses. Hypersonic weapons may be able to evade the U.S.’ missile defense shield because they fly so fast that the air pressure in front of them forms a plasma cloud which absorbs radio waves, making the weapon practically invisible to active radar systems.

According to an article on Military.com, U.S. Aegis missile interceptor systems need between 8 and 10 seconds of reaction time in order to intercept an incoming missile. But, in those 8 to 10 seconds, the Zircon will have traveled over 12 miles (20 km), and the interceptor missiles can’t fly fast enough to catch up with it.

Even more incredible is a statement made by Kremlin deputy premier Yury Borisov who said, “We have broken forward, specifically, in the sphere of hypersonic weapons and (those) based on new physical principles.” Was Borisov implying that Zircon’s incredible performance is due to new physics?

Does the U.S. have a response?

During the same week that Russia announced Zircon’s successful launch from a submarine, we reported on an announcement from the U.S. Defense Advanced Research Projects Agency (DARPA) that it had successfully tested its Hypersonic Air-breathing Weapon Concept (HAWC), which is capable of achieving Mach 5, or 3,836 mph (6,173 km/h).

During the 2000s, Boeing developed the hypersonic X-51 Waverider, which was flight-tested during the 2010s. Its fourth, and only fully successful test flight, took place on May 1, 2013 where it achieved Mach 5. Last month’s test flight is the first time since 2013 that a U.S.-designed, air-launched, air-breathing missile has achieved speeds in excess of Mach 5.

According to The Drive, DARPA will end the HAWC program sometime during the Fiscal Year 2022, which started on October 1, 2021, and hypersonic development will move to the Air Force’s Hypersonic Attack Cruise Missile (HACM) project.

Besides Russia, as we reported last month, North Korea recently announced that in September, it had successfully launched a new hypersonic missile, the fourth such missile launch in a month. That the U.S. is concerned about a possible hypersonic gap between it and other countries can be deduced from a a report that accompanied the Senate Armed Services Committee’s markup of a draft of the National Defense Authorization Act (NDAA), which was released last month. It included the phrase, “The committee is concerned that there is a lack of focus on air-launched and airbreathing hypersonic capability.”

This may be one of the few times that the U.S. finds itself on the back foot when it comes to defense technology, and it will be interesting to see how it responds.