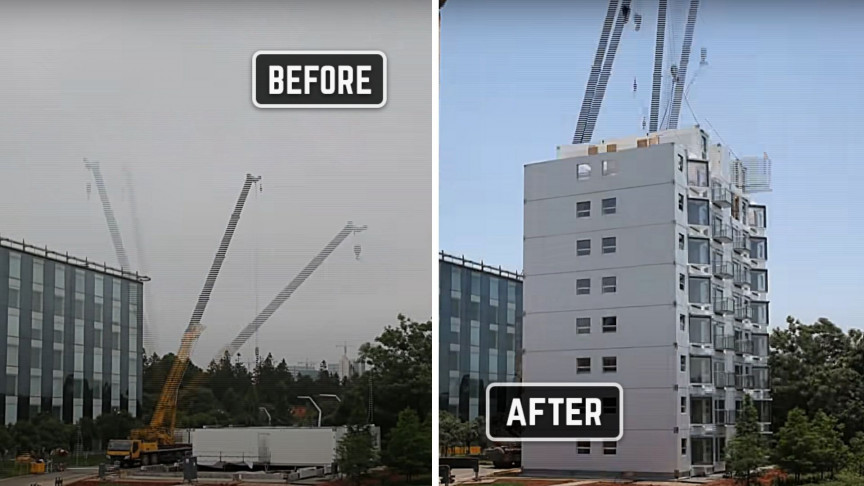 As the number of reported cases of flu-like respiratory syndrome spread in China in January of 2020, the Chinese government responded by building a dedicated hospital in just over a week. Built by using some prefabricated elements, the 270,000 square feet (25,000 square meters) hospital was regarded as an engineering marvel in the face of a health emergency. Now, a building company in China is taking fast construction to another level by building living spaces in almost one day.

The company behind the fast construction, Broad Group, is a private manufacturing enterprise based out of Changsa in Hunan province in China. Since its establishment in 1988, the company has largely focused on air-conditioning and clean air systems. In 2009, the company claimed to have innovated a revolutionary construction material called “B-CORE Slab.” The material is made out of stainless steel that offers a modular, sustainable, and cost-effective way of making buildings.

According to the company, its B-CORE Slab that goes through a copper brazing process at 1,100 degrees Celsius (2,012 Fahrenheit) is ultra-light in weight yet super strong just like the honeycomb panels used on spacecraft.

With the B-Core at the heart of its building process, the company set out to manufacture prefabricated structures that could be assembled on-site for rapid construction. All pre-fabrication is done within the strict dimensions of 40 feet (12.19m) for length, 8 feet (2.44m) width, and 10 feet (3m) height. This allows each module to fold up and assume the shape of a standard container that can be transported on a truck or on ships to any global destination.

Once on-site, the modules simply need to be unpacked and assembled using bolts.

As seen in the video, the internal spaces in the building are columnless and come with all components of good living spaces including wide windows and sit-out balconies. Interestingly, the positions of these fittings can be changed even after the building is assembled, the company claims.

The assembly carried out with three cranes took over 28 hours to complete but needed very little work beyond that since the internal flooring, walls, electrical fittings, were all completed beforehand. Once water and electricity got running, the building became an instant living space. The company also claims that its construction technology and high-quality materials make the building up to 20 times efficient than conventional buildings, making them more economical and sustainable.

The building is earthquake- and typhoon-proof and the concept can be applied to office spaces as well as residential buildings up to 200 stories high, the company says.

Prefabricated constructions are not a new concept altogether. The concept helped countries rebuild after the devastation of the Second World War. Now, it seems to be making a comeback as a sustainable and fast option.