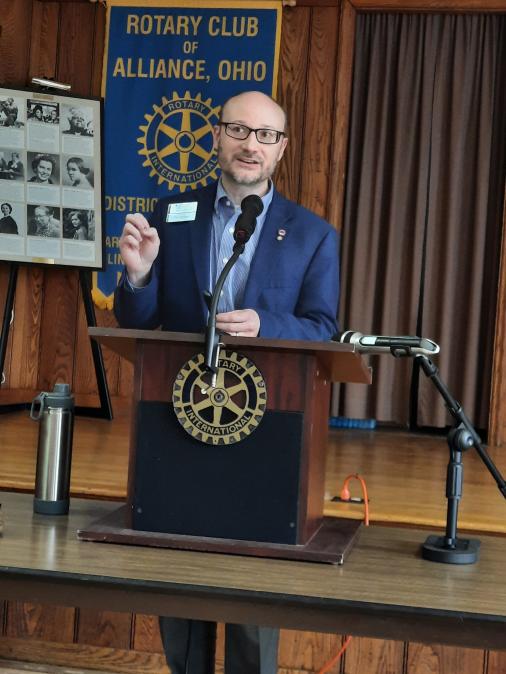 Eric Taggart is happy that he was born in Ohio.

The director of Rodman Public Library explained just why to his fellow Rotarians when he spoke March 23 during the Alliance Rotary Club’s weekly meeting at the YWCA.

It’s mainly because of the way Ohio libraries operate and the way that Ohioans use their libraries.

“When it comes to libraries, I wouldn’t want to work anywhere else,” said Taggart. “Ohio is the best state for public libraries.”

That’s because every public library in Ohio receives state funding. And that means if you are an Ohio resident, you can get a library card from any library in the state.

“We share in Ohio and that’s because of the way we are funded,” said Taggart.

Perhaps that is why Ohio has the highest per capita use of its libraries in the nation.

Taggart shared some statistics about Rodman Library and its programs.

He noted that 427,254 materials were checked out from RPL in 2021, which proves that people in the Alliance community still use and value their library. In addition, 122,281 materials were borrowed from Rodman Library last year by other libraires in the Serving Every Ohioan (SEO) consortium, which includes 98 libraries across the state.

Taggart explained that book circulation has remained steady at 55% over the past several years. Meanwhile, circulation of DVDs has waned due to people having greater access to streaming services. At the same time, circulation of digital materials has increased to 16%.

“Our app really does put all of our best features at your fingertips,” said Taggart. “You can get it from any app store on your device for free and then use it to check out our catalog, see our calendar, place holds on materials, and much more.”

Taggart also invited Rotary members and the public to visit the library on April 22-23 for a silent auction and used book sale sponsored by the Friends of Rodman Public Library. Items up for auction will be surplus furniture and equipment. Those with winning bids will be notified April 25 and will have until April 28 to get their items. Payment will be accepted in cash or check only. The book sale will be by donation.

One Book One Community

Taggart reminded Rotary members that Arshay Cooper, author of the 2022 One Book One Community selection “A Most Beautiful Thing,” will visit Alliance on Thursday. Cooper, whose book is a memoir about growing up on the west side of Chicago in the 1990s and being part of the first all-Black high school rowing team as a student at Manley High School, will speak publicly at 7 p.m. at Union Avenue United Methodist Church, 1843 S. Union Ave. His remarks will be followed by a question-and-answer period, and he will sign books.

“It’s really a good book, and we are excited to have Arshay here and meet him,” said Taggart. “The book is a quick read and I suggest that everyone read it. But even if you haven’t read the book, you will want to come out and hear Arshay talk.”

Taggart gave Rotary members an update on the Dolly Parton Imagination Library, a longtime national program that Rodman launched locally in September 2019 with the help of a $2,500 donation from Alliance Rotary.

The collaborative endeavor between Rodman Library, the Greater Alliance Foundation, and the Early Childhood Education Alliance has nearly 900 children enrolled in the program, which provides a new book every month in the mail for children from birth through age 5.

The idea behind the Dolly Parton Imagination Library is that studies show that having a good home library leads to reading success at an earlier age. That leads to success in school and then in life.

“People always ask me, don’t you want people to come to the library for books,” said Taggart. “Of course I do. But having a good home library is a key to growing a love of reading, which will eventually get those children to the public library as they grow.”

Taggart said that it takes most libraries in the Dolly Parton Imagination Library program five years to reach the 60% plateau, and Rodman Library was able to do it in just two.

He said the program was launched with about $7,500, which included the donation from Rotary and money from the Greater Alliance Foundation. Taggart said thanks to the fundraising efforts of the GAF, the program now has $31,000.

The cost to operate the program has been about $25 per child each year, but that is now decreasing as the state of Ohio is matching dollars spent by local libraries through an initiative backed by Fran DeWine, wife of Ohio Gov. Mike DeWine.

“That really helps us,” said Taggart. “Now the cost is only $12 to $13 each year per child. It helps us really develop a foundation of funds so that we make sure this program remains sustainable locally.”

Those wishing to learn more about the Dolly Parton Imagination Library, or who would like to enroll a child, can call the Rodman Library Children’s Department at 330-821-2665, ext. 223.

While people continue to be drawn to the library to borrow materials and attend the varied numerous programs held at the facility, RPL is always looking for ways to reach out to the community.

As a result, RPL staff has adapted some of its programming and have taken it on the road, including a one-on-one effort at Copeland Oaks in which library reference department staff meet with residents helping to teach them how to use their devices such as phones and tablets, and in return showing them how they can use those devices to access materials from Rodman Library.

Sixteen residents were helped during a visit in February, and Taggart said the program could be extended to other facilities in the future.

Also, now that the pandemic has seemed to slow, children’s librarians have been invited back to schools for storytime sessions. In recent visits to the Alliance Early Learning School, RPL librarians visited 21 classrooms, reaching more than 360 children.

“These kinds of programs are why our librarians became librarians,” said Taggart. “They want to provide these types of interactions with our patrons.”

Of course, Rodman Library’s primary outreach program is its Bookmobile, one of only 671 nationwide, and it is operating just as it was pre-pandemic, according to Taggart.

“The Bookmobile service remains incredibly important to our community,” said Taggart. “We know there are kids who are never going to come to the library. This provides a way for us to make sure they have access to reading materials by taking the library to them.”

During the 2021-2022 school year, the RPL Bookmobile has been making regular stops every two weeks at every school in the Alliance and Marlington districts, Regina Coeli, the Union Avenue Preschool, First Baptist Preschool, and the West Branch Early Learning School.

This summer, the Bookmobile will return to the Alliance Farmers’ Market.

“Our staff is really excited about that,” said Taggart, explaining that in addition to checking out materials, the Bookmobile staff also provides crafts or other activities for children on those Saturday mornings. “Even though it means working on the weekend. And they want to work because they are passionate about the services they provide.”

Taggart noted that positive attitude resonates throughout the RPL staff.

“Our staff members really believe in what we do,” said Taggart. “It’s awesome to go to work every day. That’s what really keeps me going, the fact that that I have a good staff. They feel passionate about what they do, and that makes me more passionate, too.”