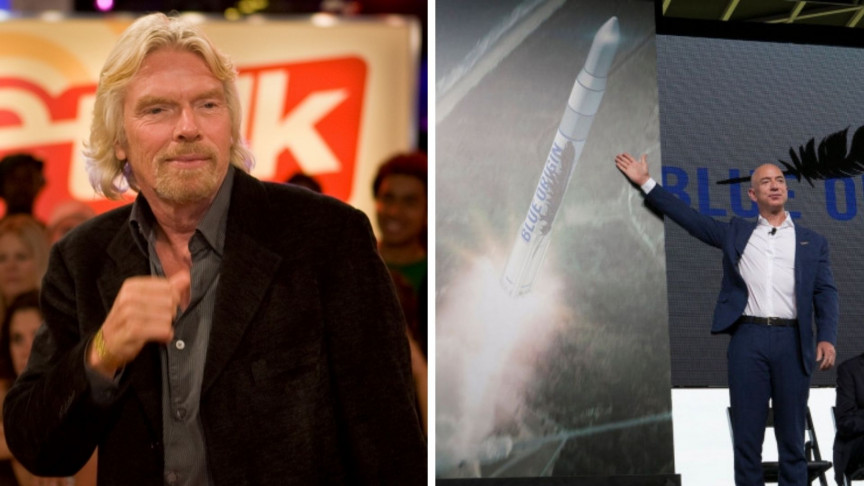 The space tourism race is heating up to the extreme with two famous billionaire space enterprise founders seemingly racing to use their own spacecraft to get to space next month.

Amazon and Blue Origin founder Jeff Bezos had announced earlier on Monday that he plans to fly into space aboard his private space enterprise’s New Shepard rocket on July 20.

Messier wrote that a “source who requested anonymity” told him Virgin Galactic plans to fly Branson on a test flight of its SpaceShipTwo rocket over the weekend starting on July 2. If that is indeed the case, it would make Branson the first-ever private space enterprise founder to fly up to space on his own company’s technology by a narrow margin of about two weeks.

Many congratulations to @JeffBezos & his brother Mark on announcing spaceflight plans. Jeff started building @blueorigin in 2000, we started building @virgingalactic in 2004 & now both are opening up access to Space – how extraordinary! Watch this space…

According to the Parabolic Arc blog’s source, Virgin Galactic actually began making plans in response to Blue Origin’s own announcement of its first crewed flight on May 5 — two days before Bezos shared that he would be part of the crew.

In a separate report about the Bezos’ and Branson’s race to get to space, Business Insider wrote that it had reached out to Virgin Galactic, who did not deny the reports of Sir Richard Branson going into space.

The company also did not respond to a question about whether Branson’s flight, which had already been planned, had been moved forward to the new dates — they only offered the vague assertion that Branson’s flight is “expected in the summer months.”

Though space travel would undeniably top the list, Branson does have a history of taking on risky endeavors, including crossing the Atlantic in a hot air balloon. He experienced zero gravity during a training flight in 2014, so that aspect of the SpaceShipTwo rocket flight wouldn’t be new to him.

There is, of course, the question of whether Virgin Galactic might be rushing to get their boss up to space to the detriment of safety procedures — the company has only completed one crewed test flight thus far, and it occurred as recently as May 22.

That is most likely why Virgin Galactic has remained tight-lipped on the proposition of Sir Richard Branson going to space on the fast-approaching first weekend of July.

How about Elon Musk you might ask? While the SpaceX CEO will no doubt keep a keen eye on proceedings over the coming weeks, it seems his current plans are somewhat more focused on the long term. Last year, Musk said he hopes he might die on Mars — “not on impact,” he made sure to emphasize.