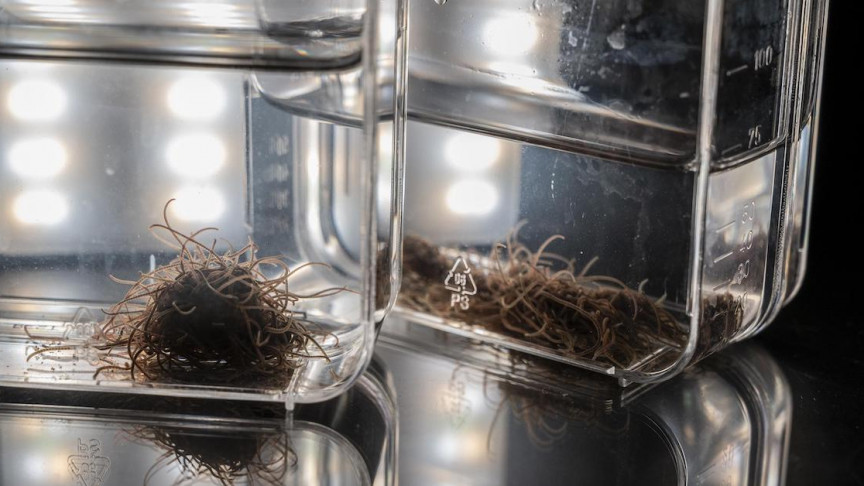 Researchers from the Georgia Institute of Technology created robots that mimic blackworm “worm blobs” in a development that could help roboticists build swarm robots that carry out functions via a complex teamwork process.

A new study by Georgia Tech scientists describes how the worms self-organize to act as entangled “active matter.” The researchers applied the surprising collective behaviors of blobs to simple robots, enabling them to evolve their own locomotion.

Blackworms are known to collaborate to form “worm blobs” that resemble a liquid, shape-shifting mass that resembles a tentacled creature from another planet.

Despite their appearance, the formation of these blobs collectively protects the individual worms from threats such as excessive heat and drying out, researchers found.

“We have now shown through mathematical models and biological experiments that forming the blobs confers a kind of collective decision-making that enables worms in a larger blob to survive longer against desiccation,” Saad Bhamla, an assistant professor in Georgia Tech’s School of Chemical and Biomolecular Engineering, explained in a press release.

“We also showed that they can move together, a collective behavior that’s not done by any other organisms we know of at the macro scale,” Bhamla continued.

In order to achieve this protective “blob” state, the researchers found that the worms braid themselves together, allowing them to accomplish tasks that an individual worm would not be able to achieve.

A mesh enclosure and pins allowed the “smart active particles” to entangle like worms, allowing the researchers to test several collective behaviors and movements.

“Depending on the intensity, the robots try to move away from the light,” Yasemin Ozkan-Aydin, a research associate at Georgia Tech, said. “They generate emergent behavior that is similar to what we saw in the worms.”

She noted that there was no communication among the robots. “Each robot is doing its own thing in a decentralized way,” she said. “Using just the mechanical interaction and the attraction each robot had for light intensity, we could control the robot blob.”

The work is a new example of how the natural world can inspire and enhance robotics, as well as another showcase of the way that swarms of robots might one day be used to tackle real-world problems with greater energy efficiency.