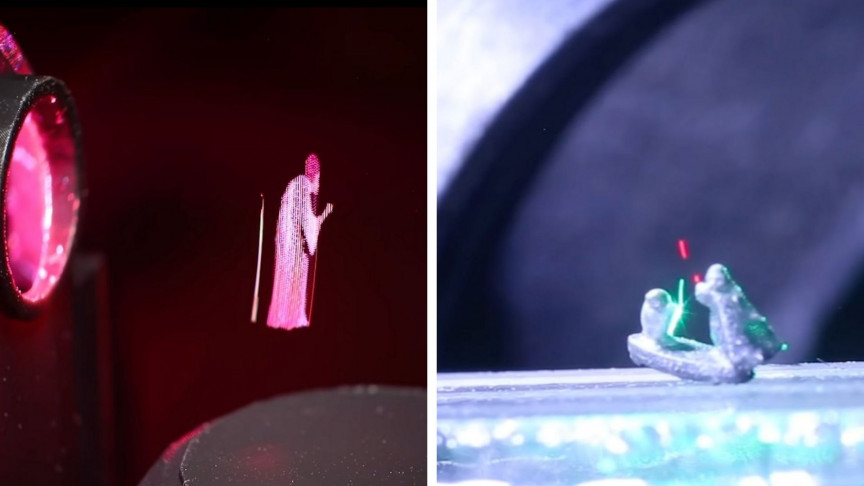 Researchers from the holography research group at Brigham Young University (BYU) say they figured out how to make “lightsabers” and “photon torpedoes” with real luminous laser beams, the group explained in a press release.

Inspired by holograms and laser weapons from giant sci-fi franchises Star Wars and Star Trek, the researchers set out to use their renowned optical trap display method to re-enact famous scenes. Their latest research is detailed in a paper published in Nature Scientific Report this month.

“What you’re seeing in the scenes we create is real; there is nothing computer-generated about them,” said lead researcher Dan Smalley, a professor of electrical engineering at BYU. “This is not like the movies, where the lightsabers or the photon torpedoes never really existed in physical space. These are real, and if you look at them from any angle, you will see them existing in that space.”

The researchers gained national acclaim three years ago when they announced their method for drawing screenless free-floating objects. The method, called optical trap displays, suspends a single particle with a laser beam before rapidly moving it around to create an illusion of a laser-illuminated floating object.

In 2019, a University of Sussex team employed a similar method to create “tactile” holograms by suspending particles in mid-air using ultrasound waves and then illuminating them with a laser.

For their latest research, funded by a National Science Foundation CAREER grant, the BYU team made simple animations using their technology. One example, shown in the video below, sees physical miniature versions of the Starship Enterprise and a Klingon Battle Cruiser from Star Trek zap one another with laser beams.

“This technology can make it possible to create vibrant animated content that orbits around or crawls on or explodes out of everyday physical objects,” Smalley said.

In their paper, the researchers also detailed how they used “fancy tricks with motion parallax” to overcome a limitation of optical trap displays — the fact that the technology lacks the ability to show virtual images.

By employing a time-varying perspective projection backdrop, the researchers showed that it is, in fact, possible to simulate virtual images, such as a moon crescent moving behind a physical 3D-printed house as if it were on the horizon.

Recently, holograms have garnered attention, and controversy, due to the fact that several companies are claiming to bring dead celebrities “back to life” in hologram form. However, the method used by these companies is really an advanced form of a 200-year-old parlor trick called “Pepper’s Ghost,” rather than a real-life hologram.

The real technology may be used to create holographic displays that allow for contact-free public interfaces in our post-pandemic world. For more on BYU’s latest developments on optical trap displays, take a look at the video below.