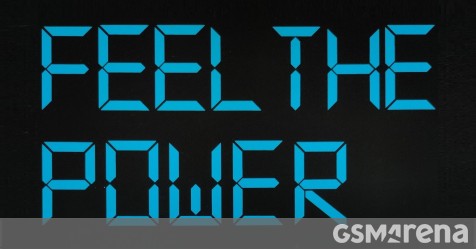 Realme introduced the Narzo 10 and Narzo 10A back in May, and the company is now set to unveil the Narzo 20 lineup on September 21 at 12:30PM IST (7AM UTC). The launch event will be likely streamed on the company’s official YouTube channel and social media accounts.

Realme sent us a cool-looking special media invite package for the launch of the Narzo 20 series, which includes energy bars and a handheld gaming console loaded with retro games like Super Mario and Contra. The former might have something to do with the battery on the Narzo 20 lineup, while the latter could be a hint at its gaming performance or its target audience – the young online users who play games. 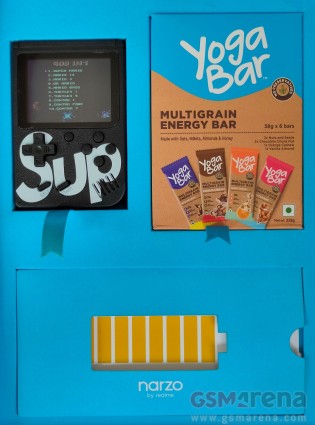 The package also includes a card which hints at a big battery and reveals the Narzo 20 lineup consists of three smartphones.

Two of them are quite obvious – Narzo 20 and Narzo 20A – and the third one might be a Pro model. The card also reveals the rear design of these smartphones and confirms they will come with multi-camera setups, with two models featuring rear-mounted fingerprint scanners.

The third one, on the right side of the image, doesn’t have a fingerprint reader on the back, which means there are three possibilities: first, it is on the front under the display, meaning an OLED panel; second, it will be embedded to the power button; third, Realme decided not to include one. The second scenario looks more plausible, but we’ll have to wait for more information to surface to be sure. 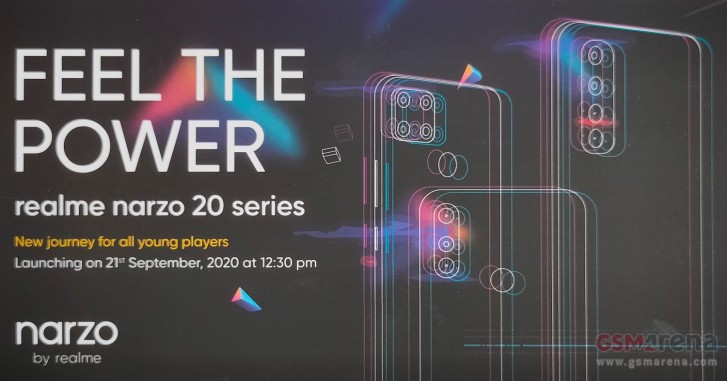 The Narzo 20 lineup will include three smartphones

That said, it’s not only the contents of the package which tease the features of the Narzo 20 lineup. The box also has a few lines written on its sides, one of which reads “Feel the Speed of Dart”, which confirms the Narzo 20 lineup will support Dart Charging. At least the Pro version will.

With the unveiling just a week away, you can expect Realme to tease more features of the Narzo 20 series in the days leading to the official announcement.