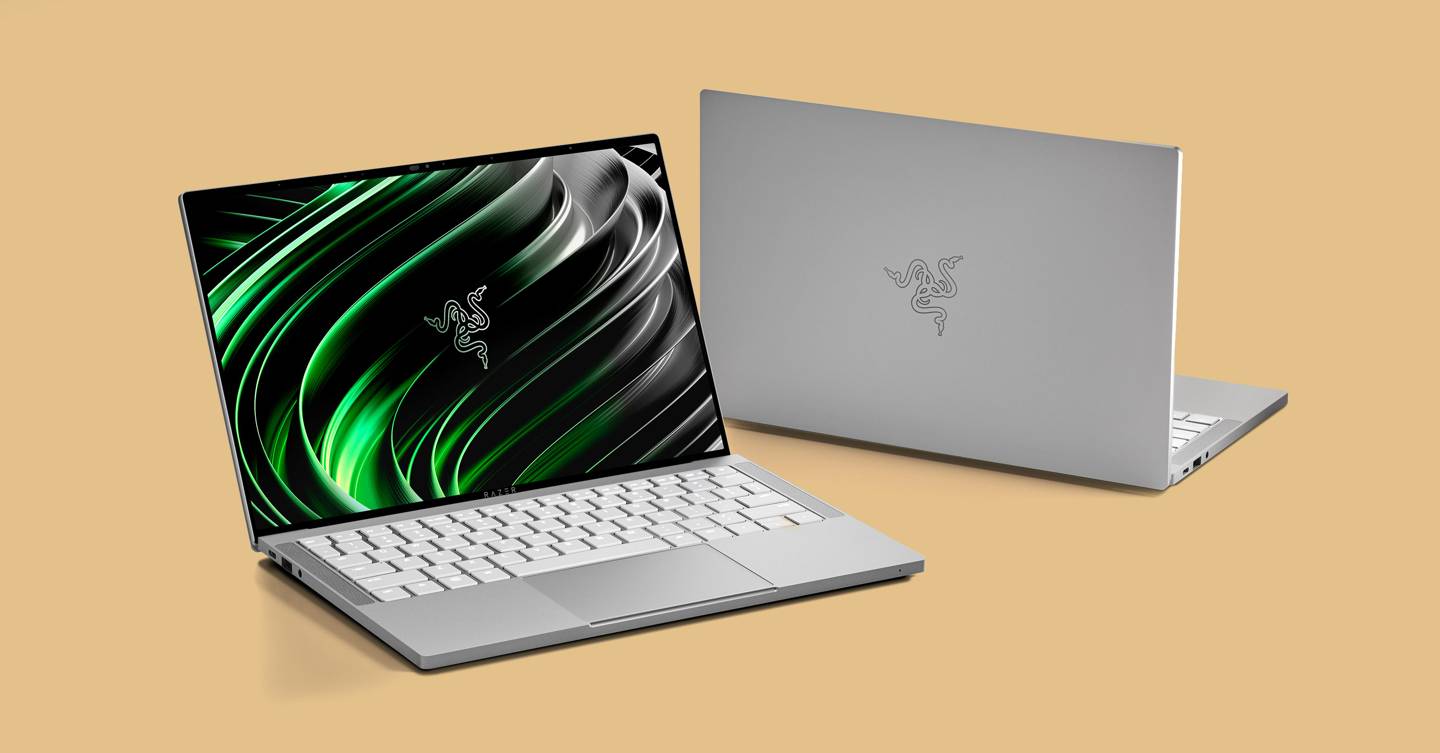 Scouting around for a laptop? It’s important to know what you’re after. Impressive design? Lightweight portability? A clamshell powerhouse? These are just three key points to consider when making your decision. It’s rare, if not nigh on impossible to find all three of these features in one device – and the Razer Book 13 is no different. However, this may not matter to some as it sets a new benchmark in the design department.

The Razer Book is billed as a new foray into the productivity market by a manufacturer that is very much defined by its gaming offering. As such, this may be Razer’s first laptop that is plainly not for gamers – at least not as a primary vehicle for all your favourite video games.

With the new ultrabook, Razer is butting heads with some premium laptop titans, like the Dell XPS 13, HP Spectre x360 13, MacBook Air and Surface Laptop – all impressive in their own right. With that in mind, along with its starting price of £1,200, it’s fair to say that the Razer Book 13 is for the productivity user who can stump up for the higher price that affords a high-quality design and modern specs.

A work laptop made by a gaming brand – a sentence that won’t immediately lead you to think of crisp and stylish design. It isn’t all that surprising though, as Razer has made some of the best-looking gaming machines around for many a year. Indeed, it’s Razer’s signature style that makes this new laptop a hardware triumph. The anodised aluminum gives off a similar refined and premium vibe to the likes of the MacBook Air and Surface Laptop.

But the Razer Book 13 manages to surpass rivals by showcasing modern design when you open the lid, too. A 16:10, 13.4-inch display with razor-thin bezels mean you get a panel that covers almost the whole top half of the laptop. The immersive screen is complemented by white, brightly back-lit keys on the bottom (Razer, of course, couldn’t resist adding its signature customisable RGB lighting, even on this productivity machine). There’s little room for excess around the keyboard, but the white keys, slim speaker grills and slightly adjusted tone of the trackpad makes the most of the space. It’s clear the mission here design-wise for the Razer Book 13 has been one of focused subtlety – and it’s a success.

When it comes to getting work done on the Razer Book 13, it really is a joy to use. Equipped with the latest Intel 11th Gen (Tiger Lake) processors and a minimum of 8GB RAM, this device won’t be troubled by intensively browsing the web, tackling Microsoft Office tasks, jumping on those Zoom calls and, even, some light photo editing.

If you’re planning on using the Razer Book 13 across a full working day, you’ll get no hassle in the battery life department either. Even with the 4K model I tested, you’ll be able to get close to the advertised up to 10 hours of battery life.

The performance and longevity is matched by a keyboard that you’ll find a dream to use throughout any long working sessions – it’s got a strong amount of travel for a small ultrabook as well as a depth of feedback that’s rare in this category. If you’re thinking of using this device in any kind of WFH-like capacity, you won’t be disappointed.

If ports are a pivotal part of your day-to-day laptoppingtm, the Razer’s size might lead you to think it would not be a viable option. Refreshingly, that’s not the case. The clincher is the inclusion of two Thunderbolt 4 ports, that enable USB-C charging from either side – solving an annoying quirk of ultrabooks like the MacBook Air. Slowly tailing this delightful inclusion is a solitary HDMI 2.0 port, a rarity on modern 13-inch machines. And, that’s not all, with a USB-A, MicroSD slot and headphone jack also included.

For those looking beyond productivity, like video game enthusiasts, there may be some disappointment. Intel’s Tiger Lake processors do offer a step up on the gaming that sleek ultrabooks can do, but you won’t often venture beyond medium settings even on less demanding titles such as Fortnite or Apex Legends. Nevertheless, it’s a great device for those looking for a strong productivity experience with the option to dip into the odd game.

The Dell XPS 13 sits atop the ultrabook mountain currently, and one of its best features is its 16:10 aspect ratio along with the practically bezel-less display it affords. Smartly, the Razer Book 13 has jumped on this train and it’s all the better for it. The squarer aspect ratio allows for far more space when it comes to working in productivity apps, and is also great for taking in more information when browsing the web. Both the £1,580 and £2,000 models also come with a touchscreen, a helpful option for scrolling through this extra display-filling content.

Despite having a slightly less cinematic aspect ratio (16:10 will introduce slightly thicker black bars above and below your video than you may be used to), the 4K display on the high-end Razer Book is stunning. From watching YouTube and Netflix to just going about your everyday, this display is crisp and punchy. Unless you’re a stickler for a 16:9 aspect ratio to get those slimmer black bars, you’ll likely never go back once you’ve tried a 16:10 or 3:2 aspect ratio on a laptop.

The Razer Book 13 is a stunning first try at a productivity laptop from the renowned gaming brand – and it’s not far off from swooping in and taking Dell’s crown. However, a couple of flaws prevent this triumph of design being a complete ultrabook masterpiece. The key stumbling point relates to heat – the underside of the Razer Book 13 gets surprisingly warm, surprisingly fast. The heat isn’t enough to be a cause for concern, but for lap use or just how it feels when you pick it up it is certainly bothersome.

The added heat is joined by some seemingly premature fan noise. When in use, the Razer Book 13 smashes any productivity tasks you throw at it, with nary a stutter. However, the fans do not act accordingly, often springing willfully into life well below this device’s peak performance. Now, the fan noise doesn’t get all that loud, but it’s a disappointing hang-up for a machine with an otherwise refined footprint.

While the design of the Razer Book 13 is by far its greatest plus, there’s one small choice that has irksome consequences. On first look at the keyboard, it’s likely you might immediately notice a surprisingly small “apostrophe/@” key. Admittedly, there is not much room for manoeuvre on this small laptop, but a better solution here is definitely required. Having a smaller version of such a frequently used key is quite the hindrance, and, while it is something you might get used to on this otherwise great keyboard, it’s likely to rile you a fair few times.

There’s not much room for a webcam at the top of this display and this seems to be bear out in its quality. It’s far from unusable, but stellar 1080p webcams from rivals like the Surface Laptop 3 provide a much crisper image. A lack of room also seems like it may have impacted the capability of the speakers. Once again, they are nowhere near terrible and are decent enough for watching your average video. However, there’s a distinct and disappointing lack of bass.

There’s a whole lot of reasons to love Razer’s first work laptop. If you must have the best-looking ultrabook available right now then the Razer Book 13 is the one to get. Along with the winning design, you’ll be welcomed with premium productivity performance that’ll meet all your multitasking needs. A great range of ports and an impressive keyboard elevates the productivity experience of this laptop to among the best in its category. It’s also great if you like the odd game, even if it doesn’t reach AAA game heights.

However, if you aren’t all about the best-of-the-best looks and a strong range of ports isn’t essential, the Dell XPS 13 still remains the one to go for at this price point – offering decent design in its own right, a more portability-friendly weight, a similarly glorious display and whisper-quiet daily use. Dell’s long reign may be approaching an end, however, with tough incoming competition from the redesigned LG Gram 2021 and HP Spectre x360 14.

So despite falling short of immediate ultrabook supremacy, the Book 13 is an unbelievable start for Razer’s first productivity machine, and the second iteration of this laptop could see it dominate future annual awards. All it needs is to neaten up a couple rough edges.

Adam Speight is a product writer at WIRED. He tweets from @_adamspeight

📱 The strange violent death of Parler

💬 Left WhatsApp recently? Here’s how to get started with Signal’s best privacy and security features