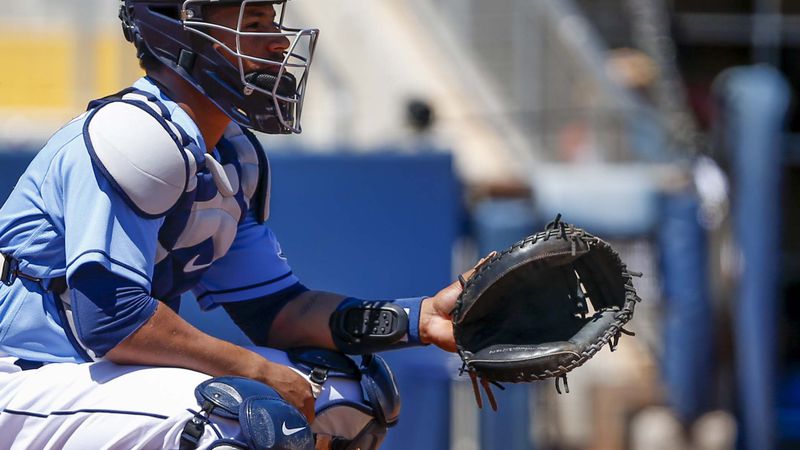 PORT CHARLOTTE — There are still quite a few things Rays players and staff don’t know about the PitchCom electronic signaling devices they have been using this spring to send signs from the catcher to the pitcher.

Such as whether the earpiece volume will be loud enough when fans are roaring in packed stadiums.

If the coding for the buttons pressed by catchers on the device — tucked into a band on their left arm — and the encrypted frequencies carrying the info are as hack-proof as the company and league officials assure.

And how much more entertaining it would be to use the customizing feature and have the pitch type and location relayed by the voice of pitching coach Kyle Snyder, or in the distinguished tones of actor Morgan Freeman, rather than the robotic Siri/Alexa-like default setting.

But there is something they seem pretty much in agreement on, which his hoping Major League Baseball decides this week to allow teams to use the devices on an optional basis.

“I love it,” veteran All-Star catcher Mike Zunino said. “I think it really helps with the tempo of the game. I think it’ll really, really clean up some of the stuff that slows the game down. … Hopefully it picks up enough steam where we can use it this year.”

The primary point of the system is to improve the pace of play — shaving off a few seconds as catchers wait for pitchers to walk back up the mound, get set, then look in for the signs on every pitch.

But the sub headline is important also — eliminating the potential for sign stealing and paranoia about it happening. Especially with runners on second and peeking at the catcher, as teams painstakingly change signs, repeat sequences, have the pitcher step off and take what seems like for-friggin’-ever in calling those pitches.

“Sequencing somebody like (lefty Ryan Yarbrough) with a runner on second base, he can shake (off the signs) four or five times and that completely slows everything down,” said Rays field coordinator/catching coach Paul Hoover. “Not only the game, not only for the fans, but for our defense. I’m happy. I think it’s going to just help the pace of play.”

And, barring some form of electronic eavesdropping or high-tech cameras zooming in on the buttons the catchers are pushing, there should be no larceny to worry about.

“I’m excited about that, too,” Hoover said.

The system, which was used for a few weeks in the Class A California League last year, is not overly complicated or high-tech.

The transmitter worn by the catcher has 12 buttons, nine of which are set up to indicate parts of the strike zone and coded for different purposes.

Most are set to signal a specific type of pitch, and when held down, a specific location. Others are for pickoffs or less intense throwovers to bases.

Whatever is punched in is then turned into words for the pitcher, and up to three fielders who have slim 6×1-inch receivers tucked into the sweatband of their caps. The catcher also has a receiver inside his helmet, and a cancel button on the transmitter if what he hears isn’t what he meant to call.

Columnist John Romano will send the latest Rays insights and analysis to keep you updated weekly during the season.

You’re all signed up!

Want more of our free, weekly newsletters in your inbox? Let’s get started.

Explore all your options

Pitchers can still shake off a pitch call and decide if in certain situations they would prefer to go back to standard signs. Prospect Tommy Romero, for example, used it only with a runner on second in his Wednesday outing.

The timing of when to call the pitch can now be flexible, though catchers may have to work around walkup songs and crowd ovations. Zunino said there can be a benefit in getting the call to pitchers who want it early, even before they get on the rubber, allowing them to get set with the proper grip and mental conviction.

“From a pitching perspective, just to simplify things and just get it and go, I think it’s going to be huge,” said major league operations coordinator Bobby Kinne, the point man on the project.

The fielders, who have had some trouble with volume and reception, benefit from knowing the correct pitch call and location, and can set their defense accordingly. “Just not having to squint in and try to guess if you have the right pitch or not,” second baseman Brandon Lowe said. “It’s a lot easier if the little voice in your head just says “Fastball.’”

Shortstop Wander Franco said via team interpreter Manny Navarro that he found the system “a little uncomfortable at first just because we’re not used to it,” but says now “I think it’s going to be helpful.”

MLB made the system available to all teams this spring, asking for feedback as they decide whether to green light it.

That the Rays were early adopters, and adapters, is no surprise given they have been at the forefront of innovative ideas, strategies and technology for more than a decade.

Let the record show their first experience, in early February, came on a field in Port Charlotte. Kinne set it up, Snyder got behind the plate and his 5-year-old son, Luke, was on the mound letting them know what he heard. From there, they made it available to minor-leaguers and, once the lockout ended, the big-leaguers.

“As we used it, we’re like, ‘This is pretty good, the technology works and it’s not intrusive,’” Kinne said.

While some pitchers, such as Andrew Kittredge, said they’re partial to the “old-school” ways, and Zunino acknowledged he has to occasionally remind himself to press the buttons and not put down fingers, the Rays are open to seeing if and how it can help.

“Once we started trying it, I think everybody really liked it,” Hoover said. “Everybody’s pretty much really on board with it.”

Sign up for the Rays Report weekly newsletter to get fresh perspectives on the Tampa Bay Rays and the rest of the majors from sports columnist John Romano.

Never miss out on the latest with the Bucs, Rays, Lightning, Florida college sports and more. Follow our Tampa Bay Times sports team on Twitter and Facebook.