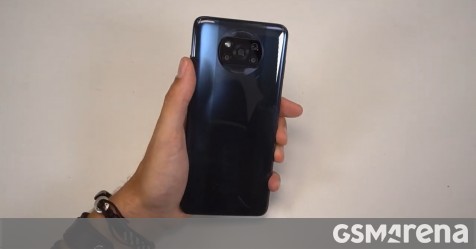 The Poco X3 NFC smartphone is going to arrive on Monday but a hands-on video popped up a bit early from the Spanish-speaking website Tecvideos TV, giving us the full details on the device. Meanwhile, a separate leak gave us a rough idea on its price.

The full YouTube hands-on was taken down since, but deleting stuff from the internet is hard so here go some screenshots.

The video explains in depth all the neat features of the phone, as well as the most important specs. It will have a Snapdragon 730G chipset, and this unit has 6GB RAM and 64GB storage.

The front features a 6.67” LCD with one punch hole for the 20MP selfie camera, while the fingerprint scanner is on the side, doubling as a power key.

The reviewer says this panel comes with Full HD+ resolution and shows the 120Hz refresh rate toggle, while the protection is Gorilla Glass 5.

Due to us not paying attention during Spanish classes back in school, it is a bit hard to understand the fine details of the review, but we do understand the battery is over 5,100 mAh, the biggest power cell in a Poco smartphone ever. The main camera on the back will be 64MP with f/1.79 aperture and will support 4K at 30 fps video recording.