Photonics: A Story of Our Quest to Harness the Power of Light 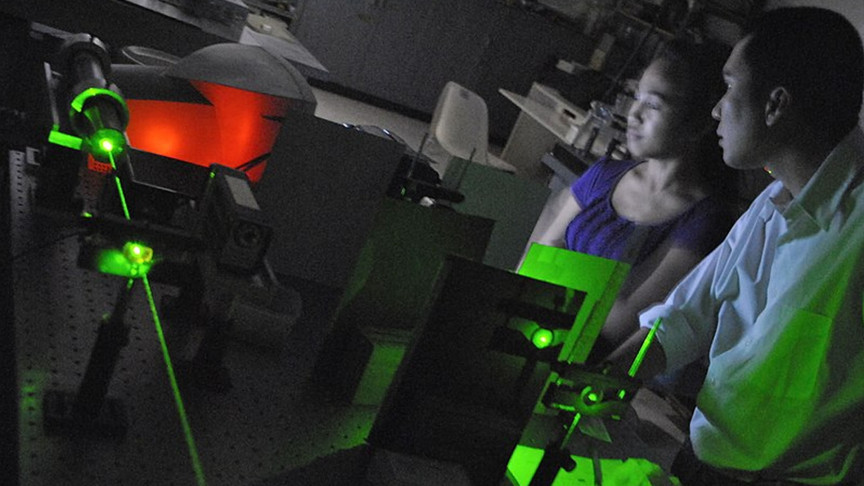 Have you ever heard of photonics? If not, you really should have.

This exciting, and fascinating field of study could revolutionize many industries in the future. Once its potential is fully realized we could live in a future where computers never overheat, never-ending lightbulbs, power consumption from electrical goods is slashed, internet speeds are close to the speed of light, and limited bandwidths become a thing of the distant past.

We may even be able to ditch electronics for good.

In short, photonics is the scientific study and technological harnessing of light.

However, it is important to note that the term “photonics” is something of a nebulous one. That being said, it is often used today to refer to a set of emerging technologies that deal with various aspects of light. These include technologies used to store, transfer, or manipulate information, but can also be used to include methods of harvesting energy from light and/or converting it to electricity.

To put it another way, photonics, in the technological sense, refers to devices that use photons to send, receive, and process information similar to modern-day electronics. This is also the main derivation of the term (think PHOTONics as oppose to ELECTRONics).

The field, therefore, encapsulates those physical sciences (and technologies) that deal with applications of light, specifically, photons, including, but not limited to, photon generation, detection, manipulation, transmission, modulation, signal processing, switching, amplification, and sensing.

While, technically speaking, photonics could cover the entire EM spectrum, it is more usually only concerned with the visible and near-infrared parts of the spectrum.

Photonics can trace its origins to the late-1960s but became popularized much later, in the 80s. During the 1980s, the term began to appear regularly in press releases, reports, and internal publications in places like Bell Laboratories and Hughes Aircraft Co. By 1982, it had become so popular that the trade magazine Optical Spectra actually changed its name to Photonics Spectra. Towards the close of the decade, IEEE Lasers and Electro-Optics Society established a journal titled Photonics Technology Letters.

Today, it is a very vibrant field with scientific and technological advancements being made all the time. It is also one of the most exciting fields of research and development that could yield some very interesting technological benefits in the not too distant future.

Through the use of photons, instead of electrons, photonics promises to bring a future of data communication, and processing, at lightning-fast speeds, as well as, reducing overheating to a minimum, not to mention providing near-unlimited coverage.

What benefits does photonics offer over electronics?

As previously mentioned, one of the main aspects of photonics is the development of electrical circuits that use photons instead of electrons. This offers some very important benefits over using electrons, as you are about the discover.

Modern-day integrated electronic devices, be they transistors, integrated circuits, etc, all communicate through the use of electrical currents. In order for this to work. such devices must overcome electrical resistance for the current to flow.

It is this basic process that tends to result in electrical circuits heating up — effectively wasting power. Not only that but electricity is also lost during transmission from the power station to point-of-use.

Because of the nature of electrical circuits, the movement of electrons (while fast) does pale in comparison to the speed of light. Electrical transmission efficiency can also be greatly influenced by the design and materials used in their construction.

Photons, on the other hand, can overcome many of these problems. They can, for example, move through certain materials with virtually no energy loss. This is why things like optical fiber cables can transmit data over very long distances indeed.

Any devices that could be run using photons, rather than electricity, also have some other inherent advantages. The first, and most important, being speed.

Since light travels roughly 10 times faster than the speed of electricity, data transmission can happen faster and over longer distances. Another benefit (when visible light or IR beams are used) is that they can pass through one another with little or no interaction.

As a result, a single optical fiber has the potential to carry more than 3 million telephone calls simultaneously — something practically impossible with electrical cables.

Photonics added speed, reduced power consumption, lack of overheating, and practical uses, meaning that with enough development, photonic circuits could make more traditional electronic ones a thing of the distant past.

What are the real-world applications of photonics?

Photonics, while a relatively new field, has already transformed many aspects of our lives today. Lasers, optical fibers, the cameras and screens on your phones, optical tweezers, lighting in cars and homes, computer screens, and TVs are all examples of technology that already integrate some form of photonic technology.

Today, one of the major applications of photonics, specifically integrated photonics, is in high-performance computing. Specific examples would be in the servers in large data server farms used by large tech companies like Google or Amazon.

Within these applications, photonics is used to transmit massive amounts of data between high-performance computers at much-reduced power consumption and reduced signal loss than more conventional electronic alternatives. This not only reduces running costs but also allows for the highest possible throughput of data.

Such applications are vitally important for our modern world, where many business services are ever more reliant on data centers like these, as well as on cloud computing.

Beyond computing, photonics has applications in many other fields from medical sciences to energy production.

In medical sciences, for example, photonics is used in a variety of ways including in surgery (such as eye surgery), tattoo removal, and surgical endoscopy. In the future, optical integrated circuits may well lead to the development of smaller, more compact, biosensors and other implantable medical devices freed from the limitation of electronics.

In industry, photonics (in the form of lasers) has led to a virtual explosion in new manufacturing techniques like laser welding, drilling, cutting, etching, and other surface modifications. It has also found applications in quality assurance, production line monitoring, and management, etc.

Another area that photonics has a great impact is lighting. The development of solid-state lighting (SSL), like LEDs and OLEDs, has greatly increased the lifespan and cost-efficiency of artificial lighting in many industries and even your own home.

And this will only improve over time, as researchers look for ways to further improve the lifespan, efficiency, and quality of lighting. Governments from around the world are also helping with this research.

The EU, for example, with its Green Deal initiative and Green Paper on SSL, has incentivized research into SSL through their commitment to zero net emissions of greenhouse gasses by 2050. Artificial lighting is a major contributor to net emissions throughout Europe contributing, it is estimated, about 19% of net emissions alone.

Replacing more traditional incandescent bulbs with options like LEDs can help save considerable amounts on lighting and electrical consumption. LEDs also offer other benefits over more traditional lighting through controllability (dimming and color-changing), as well as their robustness.

Photonics also offers some fantastic opportunities for safety and security. For example, photonic fiber sensors can be used to help monitor and detect structural defects in buildings, or used for autonomous driving systems.

Biometric and border security systems are also benefiting from photonic technologies, as well as general video surveillance, and other equipment for detecting dangerous or illegal goods at airports. They can also be used to monitor indoor air quality or detect particular pathogens, like COVID-19 for example.

Pros and cons of photonics over electronics

As we have already detailed, photonics offer some very real advantages over electronic circuits.

Photonics is not, however, free from its own inherent issues. For example, photonics cannot, as yet, be used for electrical power transmission. There is some research into the possibility of using photons for wireless power transmission, but this is still very much in its infancy and relies on the conversion of photons to electrical current.

This is inherently wasteful, and unless a point-of-use device is fully photonic in and of itself, the transmission of power using photons will likely remain an interesting, yet perhaps ultimately non-practical field of research, especially if it does not prove financially worthwhile to replace existing infrastructure.

In addition, being a relatively new area of research, the fabrication costs for things like integrated photonic devices is currently relatively high. While this will likely be dramatically reduced over time through scaling, it is not yet financially viable for developers to make the switch.

How will photonics better humankind?

Apart from the clear impact photonics will likely have on computers, are there any other aspects of our lives that photonics could yield some very real improvements?

As it turns out, there are. And quite a lot of them.

This exciting field of innovation has already seen some successes, but it is only just getting started — according to experts in the field.

While some very limited photonic microchips have been created in the lab, the development of an, as of yet, elusive practical photonic version of the microchip could lead to a kind of quantum leap in technology. So-called “photonic chips” that combine photonic signal transmission, processing, and conversion to and from electrical signals would prove to be revolutionary.

In a snip, such chips could directly process and control optical signals in much the same way that integrated circuits allow us to manipulate electronic signals today. While clearly also beneficial to computing, this would lead to massive improvements in many other areas too.

For devices like optical sensors, such as the types you find in autonomous cars, for example, would suddenly have a myriad of new options open to them not currently possible with the electronic versions we have today.

For other fields that require the smallest of possible devices, like in medical sciences, photonics will also prove to be very useful indeed. Ultra-small biosensors, for example, could be built that would have many applications from diagnostics to actual healthcare.

Not only that, but it could open up the very real possibility of seamless connectivity between living cells and synthetic human devices. This is because there is some research showing that living things may use photons for some communications functions. There is, for example, some evidence that cells may actually use biophotons as a means of triggering certain types of growth.

Although this remains controversial, if true, photonics might one day be able to tap into this cellular communication network. The possibilities this could open up for future medical technology research will be, quite literally, enlightening.

These are but a few of the possibilities that photonics could offer in the not-too-distant future. Doubtless, there will be many other completely novel applications found for as yet unknown problems in the future too.

Like any emerging technology, the future of photonics is, as yet, only the future can reveal.