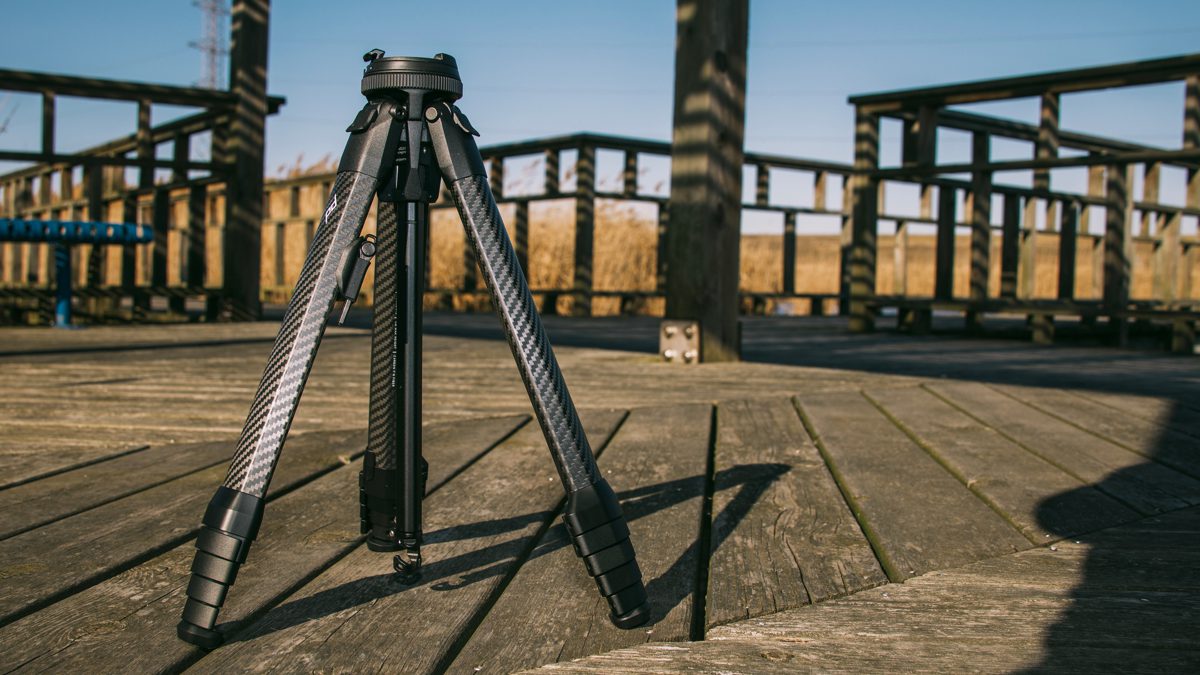 Photo hobbyists and pros know that a lot more goes into a tripod than three legs and a place to mount your camera. Construction quality, ergonomics, and design choices matter too. Until now, buying a quality travel tripod meant going with a folding model with reversible legs—compact, but still something that goes on the outside of most camera bags. Peak Design has reframed the concept with its Travel Tripod, a Kickstarter darling now coming to retail in an aluminum version for $349.95, or in a lighter carbon fiber edition for $599.95. We took the latter for a test drive and found it to be worth every penny, as well as our Editors’ Choice.

Circular Legs Are Out

When its legs are closed, the Travel Tripod has a similar footprint to an insulated canteen, something other tripods can’t match. There’s an engineering feat made to get there—the extending legs aren’t circular. Instead, the tubes have beveled edges and flat surfaces—harder to fabricate, but with less wasted space.

When closed down the tripod is 15.4 inches tall with a 3.1-inch diameter. It doesn’t sound that much smaller than the 3.4-inch diameter you get with the Gitzo Traveler, considered to be the de facto standard for premium travel tripods, but it matters.

The Peak Design Travel Tripod—I’ll steal a line from my friends at DPReview TV and abbreviate it PDTT—is a single unit when it’s folded. It’s easy to slide into a side pocket of a backpack, and takes up less space in your bag if you prefer to carry it inside.

The design used by the Gitzo Traveler and others, including the Benro Travel Angel and MeFoto RoadTrip, has big gaps between the legs when they’re folded. It makes the diameter bigger, and also means you may have to keep one leg hanging outside the side pocket of your backpack.

Peak includes a soft carrying case. It’s finished in ash gray and made from stretchy, waterproof fabric. I recommend using it if you’re planning on carrying the PDTT on the outside of your pack, or inside where it may bump up against your camera or lenses.

How much weight the tripod adds to your pack depends on the version you buy. Carbon fiber is strong, and lighter than aluminum—you’ll carry 2.8 pounds if you spend more for the premium version, and 3.4 pounds if you opt for aluminum.

If you want to pack lighter, an Ultralight Conversion kit costs $29.95; it replaces the extended legs with fixed feet, cutting the weight roughly in half, and giving you a short, 22.5-inch tripod that adds less than two pounds to your pack.

Weight isn’t the only consideration; carbon fiber doesn’t feel as cold to touch when using your camera outdoors in winter weather, and is a little bit better at dampening vibration on a material level.

The legs are flat on the bottom, but you can buy a set of spiked feet for $29.95 if you find them useful.

Regardless of whether you go for aluminum or carbon fiber, you’ll get the same amount of height. The legs are in five segments, each locking with an aluminum clamp. It makes setup a breeze—you can open up multiple clamps at once for quick extension.

With all of its segments closed down you’ll have a 13-inch tripod, good for working at low angles and when seated. With all the legs extended the head sits about 51 inches above the ground, and you can bring it up higher using the center column—full extension is five feet (60 inches). It’s a concern if you’re taller than six feet yourself, as you may have to hunch down a bit to look through the viewfinder.

I’d only bring the center column that far up if absolutely needed, though. As with any tripod, it’s the weakest link, and the column here is pretty narrow. It locks in place with a thumb screw, on the side, and can be removed and reversed to mount your camera upside-down to work very low to the ground.

The column has a hook at the bottom, so you can hang a sandbag or other weight to improve overall system stability. You’ll need to remove the hook to reverse the column, and take some care in doing so as the included smartphone clip is stowed there. It’s big enough for large phones, including my iPhone 8 Plus in its protective case.

Even without extra weight, I found the Travel Tripod to be up to snuff for use with a demanding camera. I tried it with the Sony a7R IV’s high-resolution multi-shot mode with plenty of success.

You’ll still need to follow best practices—don’t extend the legs farther than you need to, and if you’re working on an especially windy day and don’t want to schlep sandbags, you can always use your body to shield it.

The phone clip mounts in the head, and can also be used in other heads with an Arca release system. The head itself is a brushed aluminum ball head with a bubble level visible on the top.

The bubble is helpful to ensure a flat horizon. To adjust the tilt you need to raise the center column slightly—a few inches won’t compromise stability. The tension is controlled with a ring—you can set it to be fairly loose, to move with a little resistance, or to lock in place.

It’s not my favorite ball head, but it certainly isn’t bad, or anywhere near being a deal breaker. The ball itself has a rather compact diameter, so you don’t have quite the precision as you do with one that’s physically larger. It’s not well suited for panning shots when recording video, but works nicely for static scenes.

The tension control ring takes some getting used to as well—I certainly prefer a dedicated knob, but Peak is going for small here, and the ring gets you there without adding protruding bits and bobs. You can swap out the head and bring your own, if you want. It requires an accessory, another $29.95.

The included quick release plate is a slimline design, but as such requires a hex key to plug into your camera’s tripod thread. Peak includes a hex tool with the tripod—it stows in a pocket permanently attached to one of the legs.

The plate clips into the head and is flanked by two safety screws. A twist lock, positioned right above the tension adjustment ring, sets it in place. The design is a standard one, though, so you can use other plates with the Arca dovetail design.

If you do, you’ll probably need to reach for the hex tool. The safety screws interfered with the some other plates I tried, including one from BlackRapid and another from Fusion Photo Gear. They’re removed easily with the included tool, though, and the tolerances of the clamp are tight enough that you shouldn’t have to worry about your plate sliding in or out.

But you can leave them in if you’re a belt-and-suspenders type, or use the included plate or another that doesn’t physically bump into them. The Really Right Stuff baseplate I use for my Sony a7R IV, for example, mounts without issue when the screws are left in.

Photographers who frequently hop on planes for shoots in faraway locales, pros looking to load and unload less gear for location and event work, and outdoor photographers who hike all appreciate quality gear that doesn’t add too much weight to a backpack.

The Peak Design Travel Tripod, especially the carbon fiber version we received for review, fits the bill perfectly. It’s light enough to pack without having to think about it, and I can’t understate just how much easier it is to squeeze into your camera pack or luggage when compared with a travel tripod with reversible folding legs, like the popular Gitzo Traveler, Manfrotto BeFree, or MeFoto Road Trip.

It’s not perfect. The ball head design is certainly not for everyone. I struggled to get used to the dual twist locks, sometimes unlocking the tripod plate when I wanted to reduce tension to reframe a shot. But muscle memory kicks in after a while, and it’s still very functional. If you really hate it, you can always change it out.

You’re also spending a bit more than some others. With the exception of Gitzo, a premium brand, competitors sell aluminum alternatives for around $200 and carbon fiber ones for around $300. It’s worth it, though, and earns our Editors’ Choice.

Bottom Line: The Peak Design Travel Tripod rethinks what a go-anywhere tripod looks like, eschewing the fold-up designs of competitors to more easily fit into your pack.