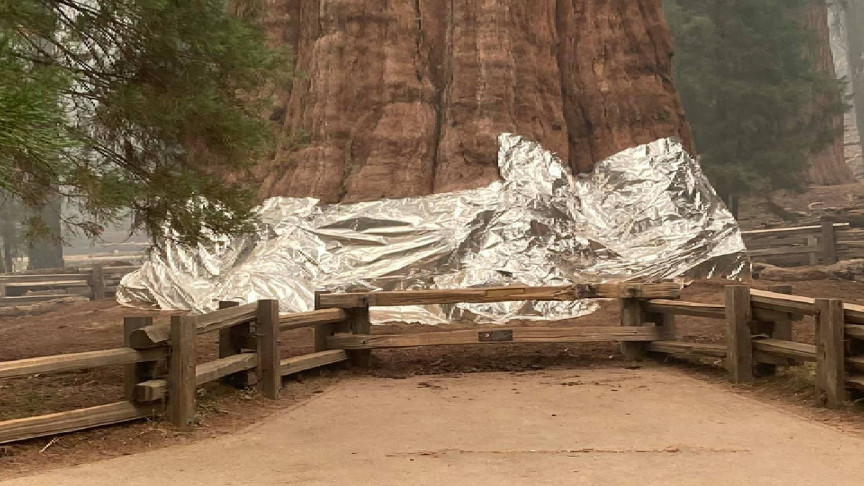 The Sequoia and Kings Canyon National Parks in California, a popular tourist spot that’s home to some of the world’s largest trees, are being threatened by a fire as climate change exacerbates heat waves. The park’s management is now using new technology to protect these old trees by wrapping them in foil.

The management added that the KNP Complex was ignited by lightning on the night of September 9. The complex is comprised of the Paradise Fire and the Colony Fire.

They also added that Sequoia National Park is closed to the public and provided a map of the areas under evacuation warning and order, as well as other evacuation resources.

The Guardian further reported that firefighting efforts were being complicated by smoke, which clouds visibility for aerial drops. The flames were also reported to be burning in steep and rugged terrain, thwarting access on the ground.

“As a community we are going to be tested,” said Clay Jordan, superintendent of Sequoia and Kings Canyon national park, during a community meeting Tuesday, September 14.

The fires began on Thursday, September 9, and by Saturday, September 11 Sequoia National Park closed its Tulare County entrance. On Sunday, September 12 the Giant Forest, which has over 2,000 giant sequoias, including the General Sherman Tree, the world’s largest tree, was further closed.

“These fires are growing and have potential to affect park infrastructure and resources,” the U.S. Forest Service said in an incident overview posted online at the time. “The parks are aggressively attacking these fires to suppress them.”

Two weeks, later, however, the fires continue to rage while firefighting teams do their best to protect Sequoia’s famous trees.