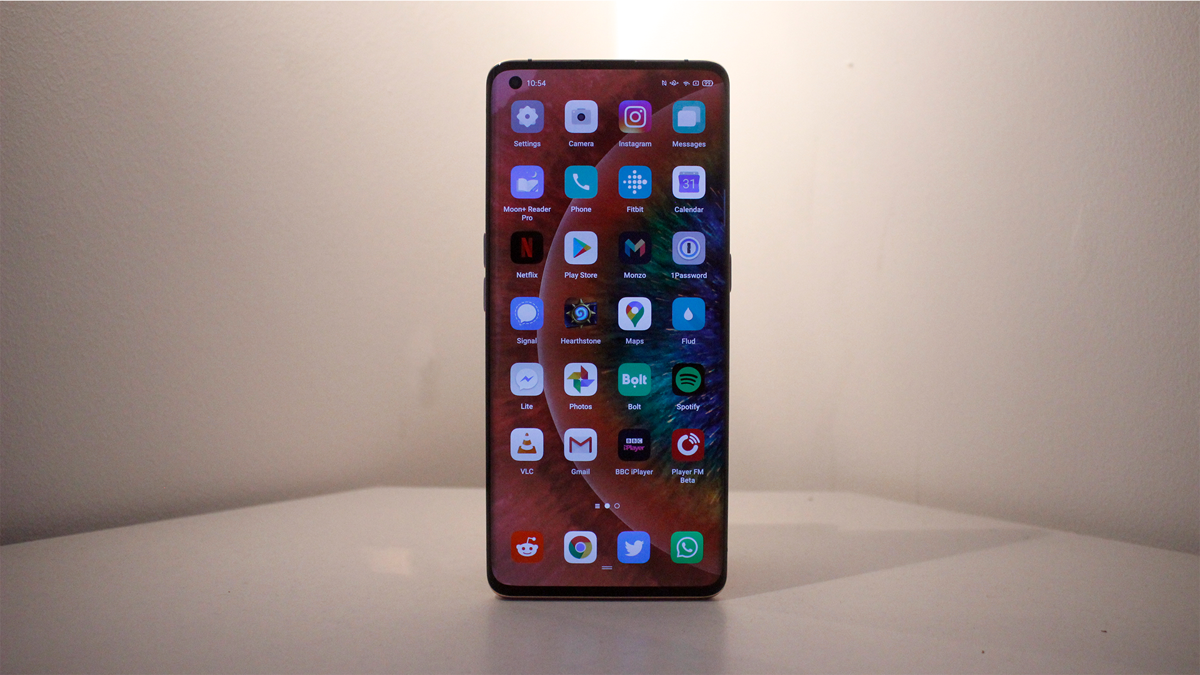 When it first came out, Oppo’s Find X line made headlines for pushing the envelope with a mechanical selfie camera and an all-screen design. Its successor, the Find X2 Pro, has a high bar to live up to, yet it errs on the side of conventionality when it comes to hardware and software, which is disappointing considering its price of £1099, or approximately $1,300. But while the Find X2 Pro may not steal the spotlight in the way its predecessor did, it’s still a very potent device, and a hard-hitter when held up against other current flagships. We took a first look at the phone in London. 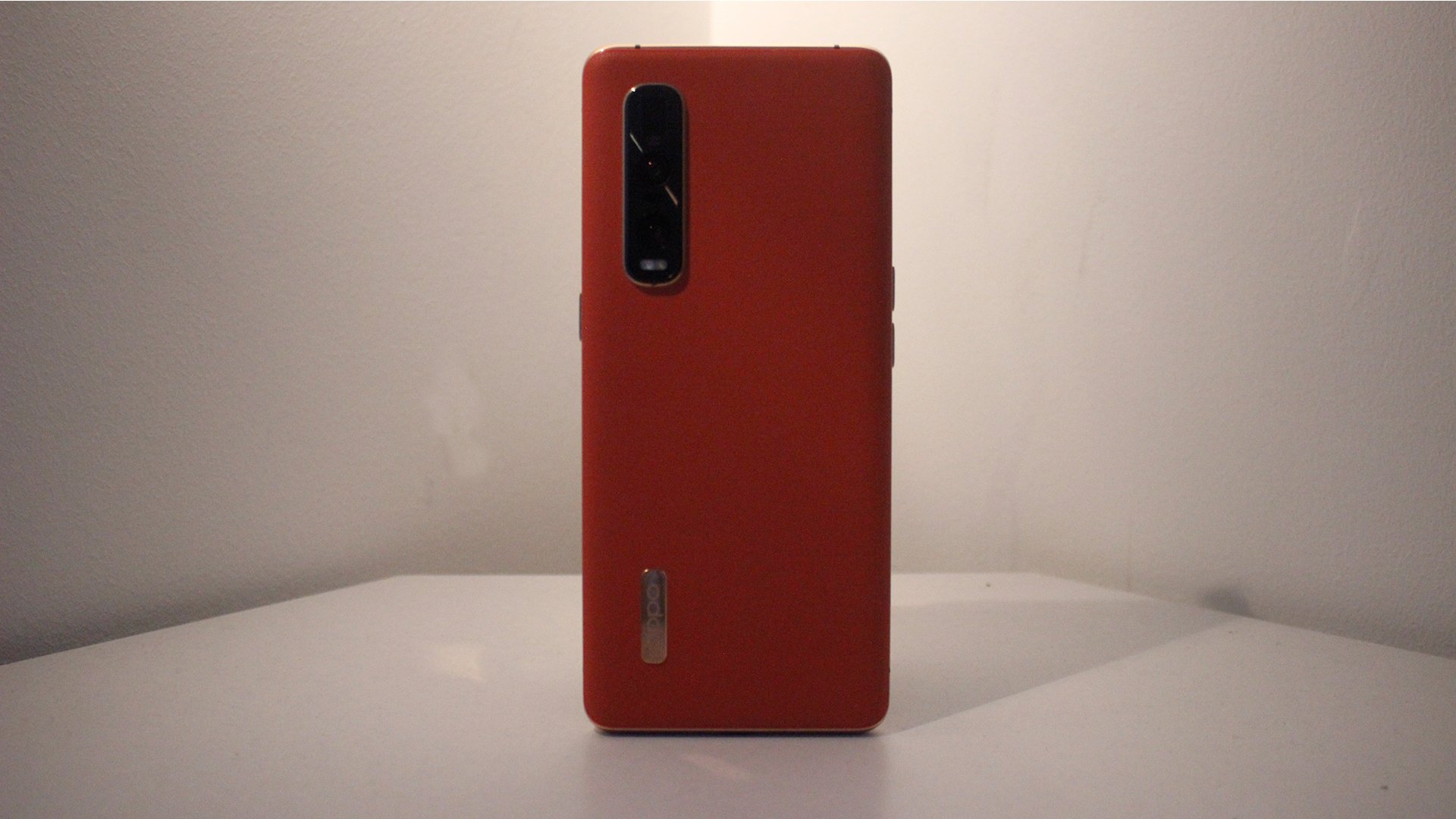 The Find X2 Pro comes in two varieties: one with a ceramic back that looks similar to glass, and a vegan leather version. Not only is the vegan leather more eye-catching, it gives the phone a bit more personality and it doesn’t collect fingerprints. The neatness of a gold Oppo badge on the back is a nice touch too.

The display is a 6.7-inch panel with 3,168-by-1,440-pixel resolution and a 120Hz refresh rate, along with a claimed brightness of between 800 and 1,200 nits. Both the refresh rate and brightness come through clearly; scrolling through apps is slick, and watching videos on the phone is very enjoyable.

Compared with the Huawei P30 Pro, the Find X2 Pro has more vibrant whites and a brighter color range overall. Watching Planet Earth on Netflix, the the oceans look both bluer and murkier on the P30 Pro. The Find X2 Pro’s screen is very similar to the OnePlus 7 Pro’s (OnePlus is owned by BBK Electronics, which also owns Oppo), but showed a distinct advantage when it comes to fine details and textures when watching a 4K stream of animals on YouTube. There’s also slightly more nuance in darker areas, making for a very enjoyable experience overall.

While Oppo’s phone is capable of 10-bit HDR, it’s currently not supported on Netflix like it is on the P30 Pro. Instead, you can use Oppo’s Ultra Vision Engine (accessible from the slide-down settings menu at the top of the phone or in the main Settings app) to upconvert standard dynamic range video to HDR. The difference is noticeable; without it, the ocean loses some of its luster, and colors are less punchy. While useful, the Ultra Vision Engine also comes with motion smoothing, which we generally recommend disabling when viewing most content. 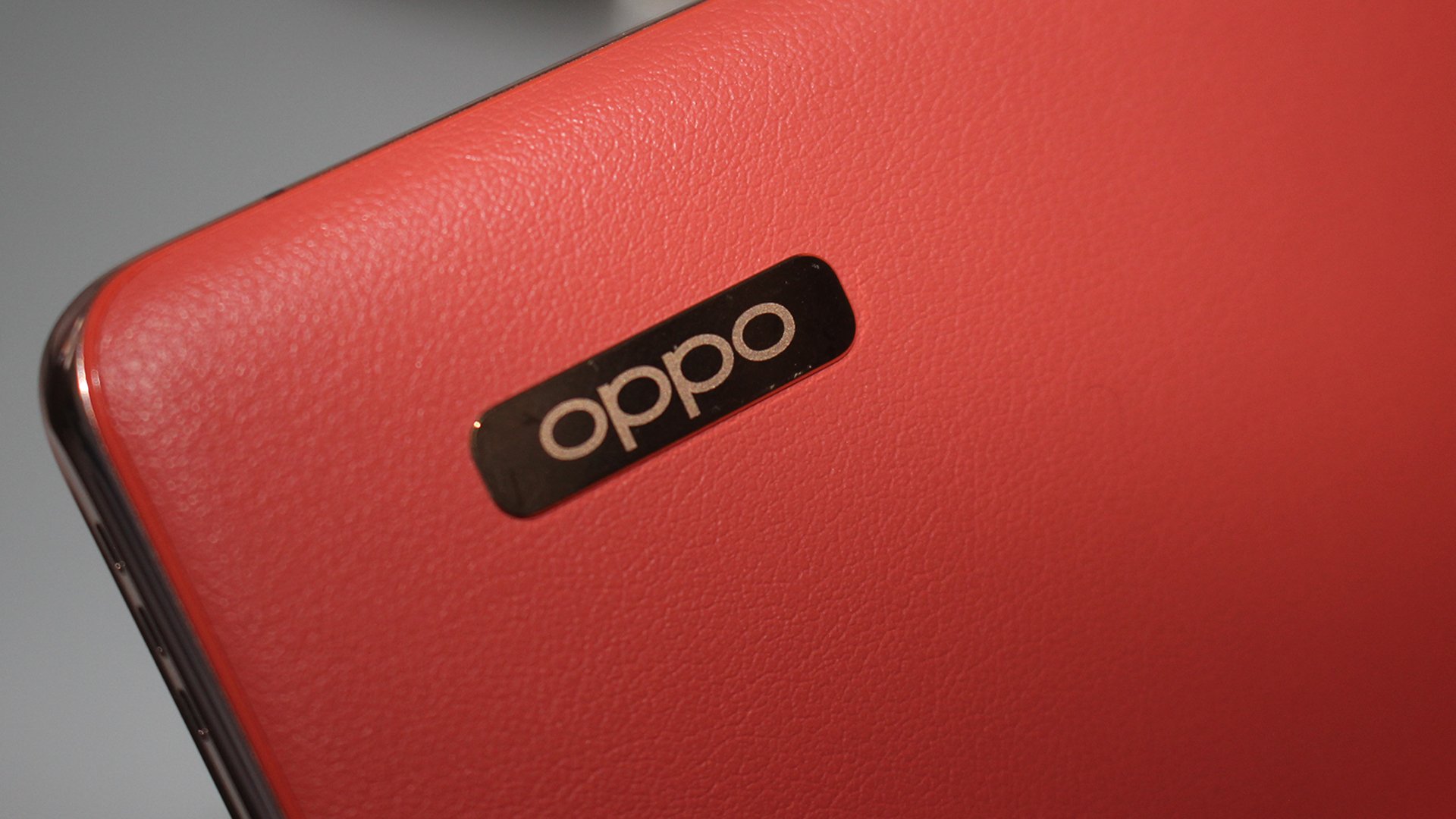 At the bottom of the phone is a USB-C port for charging and file transfer, as well as a dual SIM card slot. A fingerprint sensor can be found under the screen and works well, or you can use face unlock. The phone is also IP68 rated for dust and water resistance, although we still recommend you put it in a case.

On the back of the Find X2 Pro is a triple-lens cluster with two 48MP wide-angle cameras (one with a f/1.7, 1/1.4-inch sensor, another with an f/2.2, 1/2-inch sensor) and a 13MP telephoto lens. Alongside that hardware comes a smattering of Oppo camera software including a new night mode and 60x digital zoom.

The Find X2 Pro’s camera performance is commendable. Taking some photos on a clear day over London, it makes the OnePlus 7 Pro look overly sharp and too high-contrast in comparison, while the P30 Pro can’t quite match it for accuracy. The Find X2 Pro puts across a more natural color balance, while Huawei’s camera leans a bit too warm. 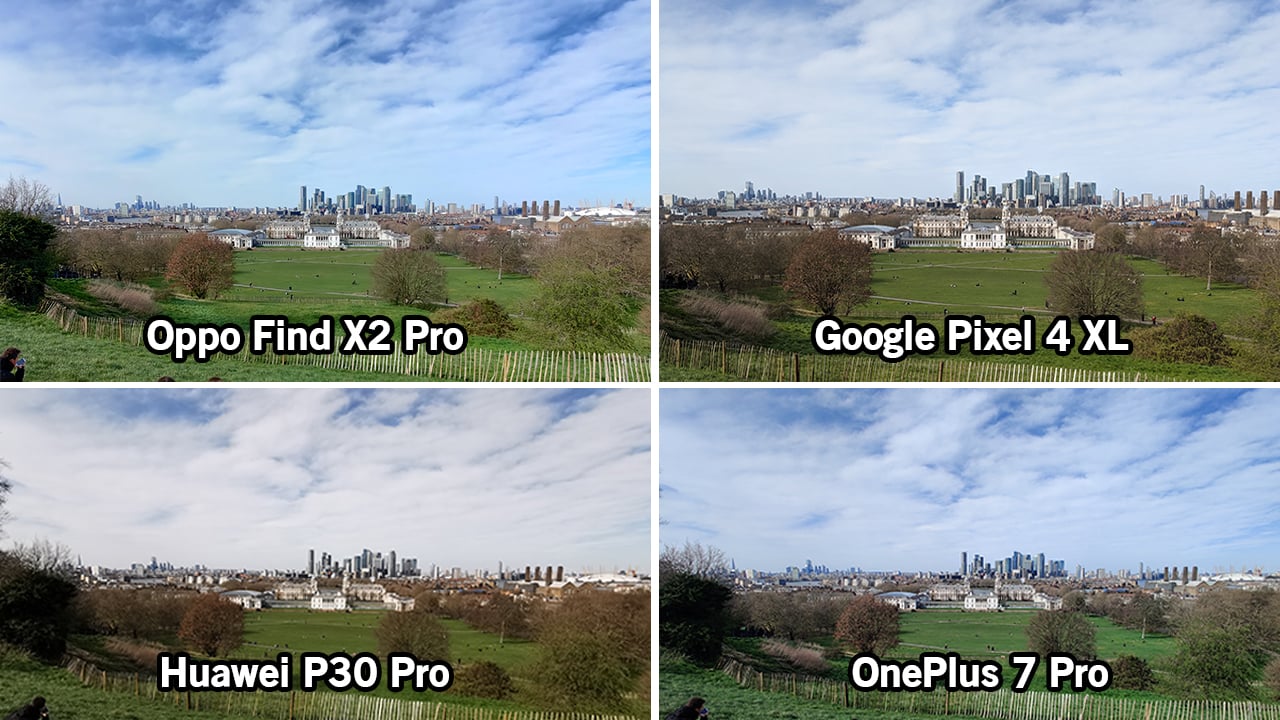 It doesn’t quite beat out the Google Pixel 4 XL, however, which has a more muted quality to blue skies, green grass, and buildings on the horizon that makes photos look more natural. While there are obvious trade-offs between the two phones, like the option for a wide-angle lens, or a zoom mode that can go past 8x, photographers who want the most accurate photo an Android phone can get them will find better results with the Pixel. 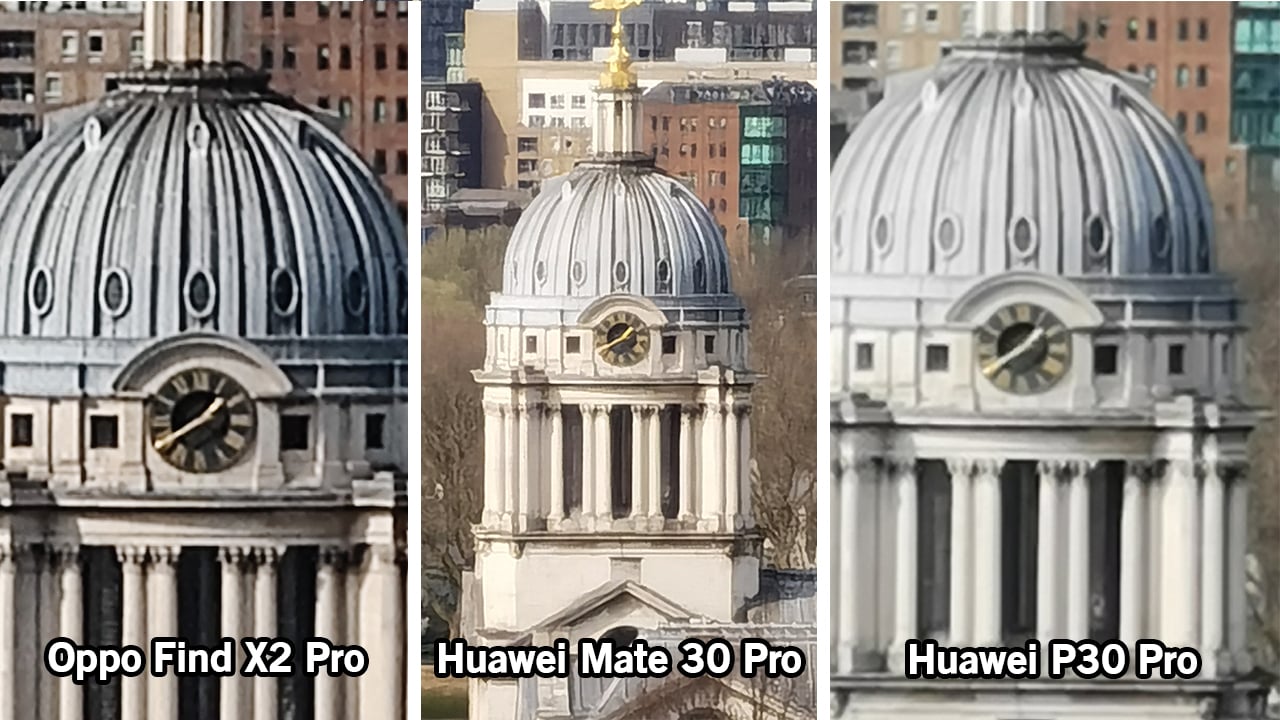 Oppo is also touting a new night mode, Ultra Night Mode 3.0, but there is still a sizable way to go before it can live up to the standards set by Huawei. Taking a photo in a dimly lit room, Huawei’s default photo mode (separate from its night mode) provides much better color accuracy and clarity than Oppo’s, although it does best Google’s Night Sight. 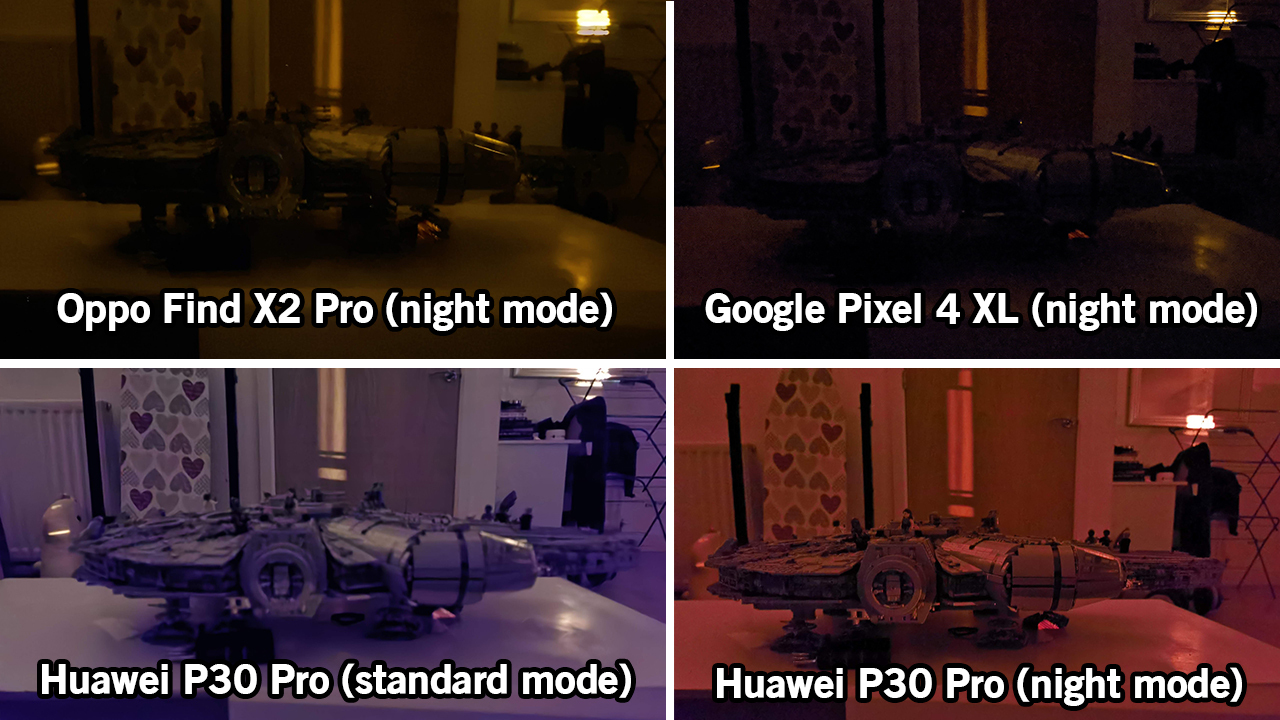 The 32MP selfie camera is nothing to write home about. Next to the Pixel 4 XL, the Find X2 Pro has more difficulty capturing colors and details, looking a little washed out in comparison. It does come with an array of built-in editing options, such as face smoothing and thinning, which are popular among Eastern users. They can be turned off before taking a photo.

Powering the Find X2 Pro is Qualcomm’s Snapdragon 865 processor, with a Qualcomm X55 5G modem, 12GB RAM, 512GB of storage, and a 4,260mAh battery. There’s nothing to complain about as far as power goes, as heavy apps load easily and slighter ones spring into life in seconds.

While the phone is powered by Android 10, it also has Oppo’s ColorOS 7.1 layered on top, which trips over its feet too often to be ignored. Oppo’s miniature keyboard, which pops up to input email addresses and passwords for games like Hearthstone, interferes with 1Password’s automatic login feature. Similarly, Oppo’s Smart Assistant, accessed by swiping right on the home screen, is vastly inferior to competing services from Google, Huawei, and Oppo.

The digital sidebar, which lets you take a screenshot, access your messages, and quickly open other apps, remains a footnote. Apps on the home screen are aligned in a five-by-six grid rather than the default four-by-six, which makes longer-named applications drop letters onto new lines, which looks bad on a $300 phone, let alone one that costs over $1,000. 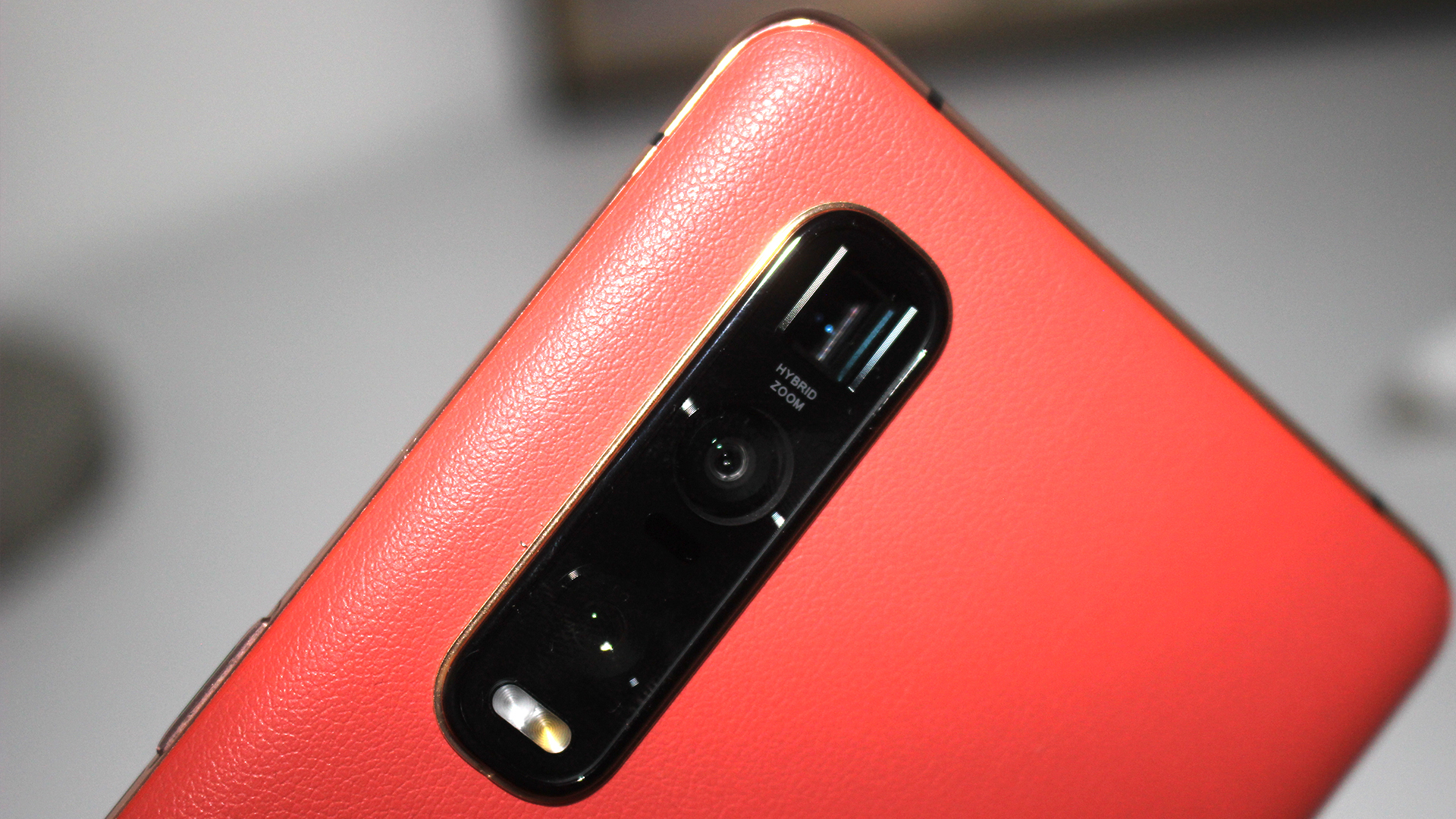 Battery life is acceptable, lasting comfortably for one day, but the Find X2 Pro still doesn’t have any wireless charging capabilities, let alone the back-to-back charging that Huawei pioneered a generation of phones ago. It’s a disappointing absence for a flagship, but one that shouldn’t make or break your buying decision.

Like many similar Chinese smartphones, Oppo’s Find X2 Pro is a device with impressive hardware, let down somewhat by lackluster software. While its screen, design, and processing power are impressive, the phone doesn’t top the camera capabilities or the software smoothness found on Google’s latest Pixel devices. It also isn’t available in the US, making it a nonstarter for most of our readers. If you’re looking for more power than the Pixels can deliver, meanwhile, you’ll be better served by the $1,200 Samsung Galaxy S20+, or you can save quite a few dollars on the $900 OnePlus 8 Pro.