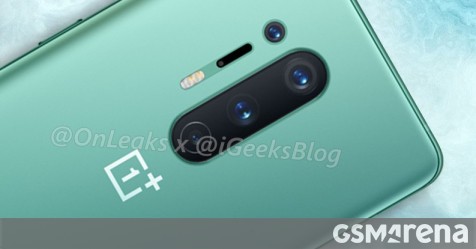 @OnLeaks unleashed 3D renders of the OnePlus 8 Pro months ago, but now the leakster claims to have gotten his hands on the real thing – official images of the phone alongside the final spec sheet. It matches up with the other leak of OnePlus 8 specs (which includes the non-Pro model too).

The 6.78″ AMOLED display on the OnePlus 8 Pro will have curved sides and a punch hole, ending the pop-up camera experiment of the 7-series. The display will be of 120Hz variety, the selfie camera will have a 16MP sensor.

There will be two 48MP cameras on the back – one with a regular and one with an ultrawide-angle lens. There are two more modules here, 8MP and 5MP, though their exact function is unclear.

The OnePlus 8 Pro will finally correct two long-standing omissions in the company’s lineup. First, it will support wireless charging at 30W plus 3W reverse wireless charging. Wired charging is also rated at 30W, the battery capacity is set at 4,510mAh.

Second, the phone will officially have dust and water resistance with (IP68). And check out that mint color, that’s new too.

The new flagship will use the Snapdragon 865 chipset and will sport 5G connectivity. The base memory configuration will be 8GB of RAM and 128GB storage, with a 12/256GB option available.

The new phones will be unveiled on April 15, there’s no word on pricing for the two premium models yet.