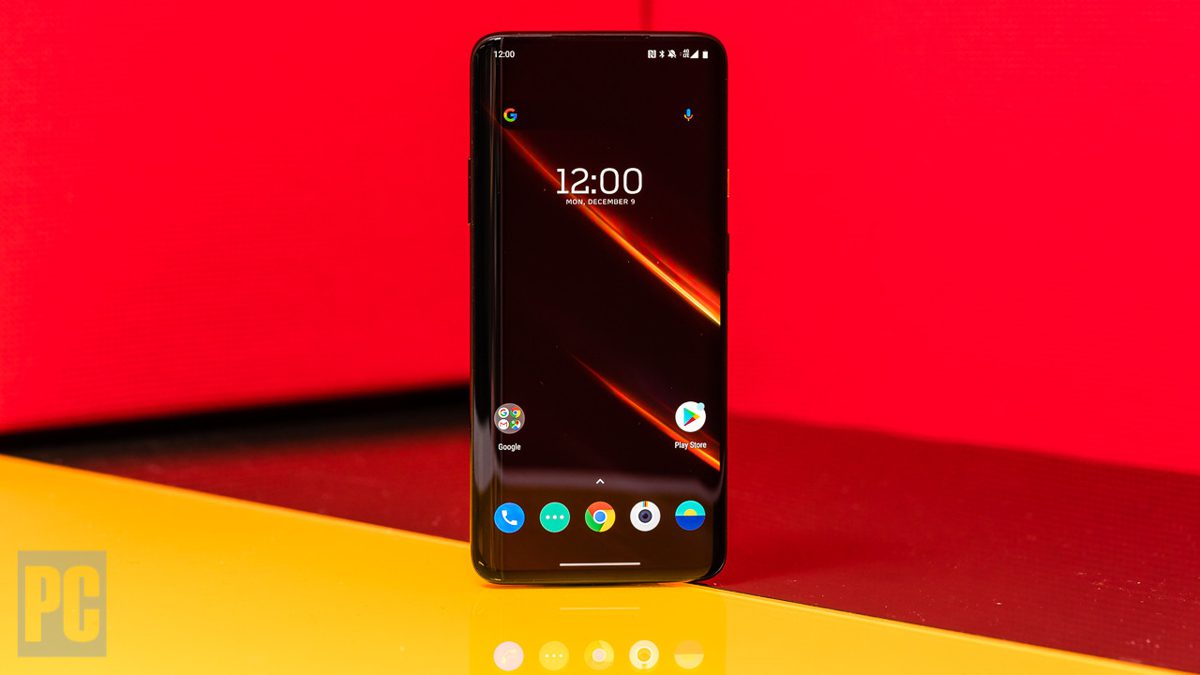 The OnePlus 7T Pro McLaren is a good buy for a big phone on the “New T-Mobile.” At $899.99, it costs $300 less than our Editor’s Choice, the Samsung Galaxy S20+, and has slightly better network performance. With the McLaren’s terrific screen, superior software, and good-enough camera, it’s a tough decision whether the S20+ is worth the extra coin.

A lot has happened since we first reviewed this phone in December, so we decided it’s worth another look. Most notably, the Sprint/T-Mobile merger is effectively a done deal, and the Samsung Galaxy S20 lineup set a new standard for both high cost and performance. Whether you choose a McLaren or an S20+ on T-Mobile is going to come down to whether you need key additional specs on the S20+’s sheet. Do you live in a central city likely to get high-band 5G, do you want to experiment with 8K recording, or do you just want to be part of the Samsung mainstream? Then go with the S20+. Otherwise, the McLaren is a very compelling alternative.

What’s in a Name?

And can we address that name? The phone is made by OnePlus, it uses the 7T processor and charger, it’s in the Pro body, it has 5G, and it has something to do with a car company. It’s an unfortunate mouthful, and should have been collapsed in some way. From here on out, we’ll mostly just call it the McLaren.

The Same, Only Faster

The OnePlus 7T Pro 5G McLaren is co-licensed with the McLaren car company, which is famous for its fast vehicles. Design-wise, that translates into a phone with a black body with orange accents and a wavy silver pattern on the back, along with a special orange cable and charger. It comes with a nice case with an Alcantara-esque black back that doesn’t protect the front of the phone at all; I found that out when I dropped a 7 Pro in a similar case and cracked the corner of the screen.

This is among the fastest Android phones on the market, thanks to its clocked-up 2.96GHz Qualcomm Snapdragon 855+ processor and OnePlus’ software build. It scored 10,899 on the PCMark Work 2.0 benchmark, as compared with the OnePlus 7T’s 10,361 and the OnePlus 7’s 10,043. I take that benchmark very seriously because it simulates actual tasks like web browsing and photo editing.

Otherwise, though, it benchmarks almost exactly the 7T, which also has the 855+ processor, putting the phones slightly ahead of ordinary 855-based devices. The 855+ pushes frame rates on the GFXBench Car Chase Offscreen graphics benchmark from 41-43 to 48, for instance, and bumps Geekbench single-core processor scores from around 745 to around 775. Those scores are all a bit behind the newer Snapdragon 865 processor in the Galaxy S20 series, however. We have a full benchmark story comparing the two series of phones.

That speedy processor combines with 256GB of UFS 3.0 storage and 12GB of RAM for a very smooth experience. The ridiculous, excessive amount of RAM means that pretty much all of the apps you’ve used recently will maintain their state if you flip back to them.

The real MVP here, though, is OnePlus’s Oxygen OS version of Android 10, which is somehow even smoother and more efficient than the Google Pixel 4’s. While it doesn’t have some of the Pixel’s latest buzzy features, such as live transcription, you’ll have absolutely no problem with performance.

The McLaren has the same cameras as the 7 Pro does, but photo quality has improved with several months’ worth of software updates. To recap, there’s a main 48MP f/1.6 camera, a 16MP f/2.2 wide-angle camera, and an 8MP f/2.4 3x-zoom camera, along with a 16MP pop-up front-facing camera.

I took some shots at the Qualcomm Snapdragon Tech Summit in Maui and I was more impressed with the quality this time around than I was back when the 7 Pro launched. Low-light performance, especially, is less noisy than the Pixel 4’s, although more prone to blur because of lower shutter speeds. You get hyper-saturated, punched-up colors, which is a big change from the original 7 Pro at launch.

To get those speeds, you need to use the included charger and cable. The proprietary charging system doesn’t work with standard USB-C PD chargers, and it doesn’t support wireless charging.

In testing, battery life for the McLaren was slightly shorter than the 7 Pro, lasting 10 hours and 54 minutes in our streaming video rundown compared with the 7 Pro’s 11 hours and 37 minutes. In a week of using the phone, I didn’t have the sort of midday battery pressure I’ve experienced with the smaller Pixel 4 and Samsung Galaxy S10e.

Leading the Way on Low-Band 5G

The flagship feature here, really, is the 5G. At $899.99, the McLaren is more expensive than the $799.99 LG V60 ThinQ 5G, but less expensive than any of the Galaxy S20 series. The phone supports low-band and mid-band 5G, but not the high-band 5G that T-Mobile has in seven cities but seems uncomfortable talking about expanding.

That makes the McLaren similar to the V60 and Samsung’s small S20. There’s a confusing menu of different 5G options available right now. I’ve chosen the Galaxy S20+ as our Editors’ Choice because it has everything, and you don’t have to choose or think about low/middle/high bands. But that ends up costing a premium.

Low-band 5G is the least impressive form of 5G, with only slight improvements over 4G, but it’s the “nationwide” one that most T-Mobile users will experience. Tested side by side with a Samsung Galaxy S20 Ultra, the McLaren had superior low-band 5G performance, with an average of 120Mbps down and 41Mbps up compared with the Galaxy S20’s 109Mbps down and 38Mbps up.

New York has very limited T-Mobile 5G capacity right now, though. The differences will probably be more striking in areas with better T-Mobile 5G, because the McLaren has a software update that Samsung phones haven’t yet received to help combine low-band 4G and 5G channels for better performance. The latest I’ve heard is that the Samsung phones will receive that update in April.

I go into great detail in my in-depth analysis of T-Mobile’s 5G, but that analysis is already a little stale. Once the T-Mobile/Sprint merger goes through, T-Mobile will start to reconfigure Sprint’s 2.5GHz airwaves for 5G and will move more low-band 600MHz airwaves to 5G, greatly improving performance on phones like this one that support both of those frequencies.

This is going to open up some real performance differences over the next year or two with 4G-only phones like the OnePlus 7 Pro. The 7 Pro is very compelling at $549 to be sure, but you should be aware that after this half of the year, most of T-Mobile’s network performance improvements will be on the 5G side.

The $899.99 McLaren gets you most of what the Galaxy S20+ offers, for $300 less (and $100 less than the smaller Galaxy S20). The screen has a slightly lower refresh rate, the processor is slightly slower, you can’t record 8K video, and you don’t get high-band 5G (which isn’t on the smaller S20). But performance on the MacLaren feels terrific anyway, because OnePlus’ software is just so darned good. Unlike Samsung’s notorious skins, a OnePlus phone never feels weighed down or overly complex—it’s a smooth, streamlined Android experience. Considering the substantial savings, that might just make it worth it for you.